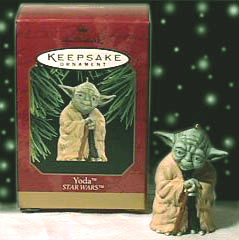 Rare 1997 Hallmark Handcrafted Keepsake Ornament- STAR WARS Yoda- box reads: In the classic space adventure Star Wars: The Empire Strikes Back, Yoda trains Luke Skywalker in the ways of the force and warns him of the dangers of the dark side. The diminutive Jedi Master from Dagobah also instructed Jedi Knight Obi-Wan (Ben) Kenobi. I have ALL the Hallmark Star Wars Keepsake Ornaments including Luke Skywalker, Darth Vader, and the druids, C-3PO and R2-D2. This item sold out very quickly in 1997 & was difficult to find. This would make a great gift for any Star Wars fan, especially since it is no longer available. The STAR WARS series Hallmark ornaments are amazingly detailed. The quality and detail of the figures and ships have to be seen to be fully appreciated. Since they were made and released for less than a year, they are truly collectors items.