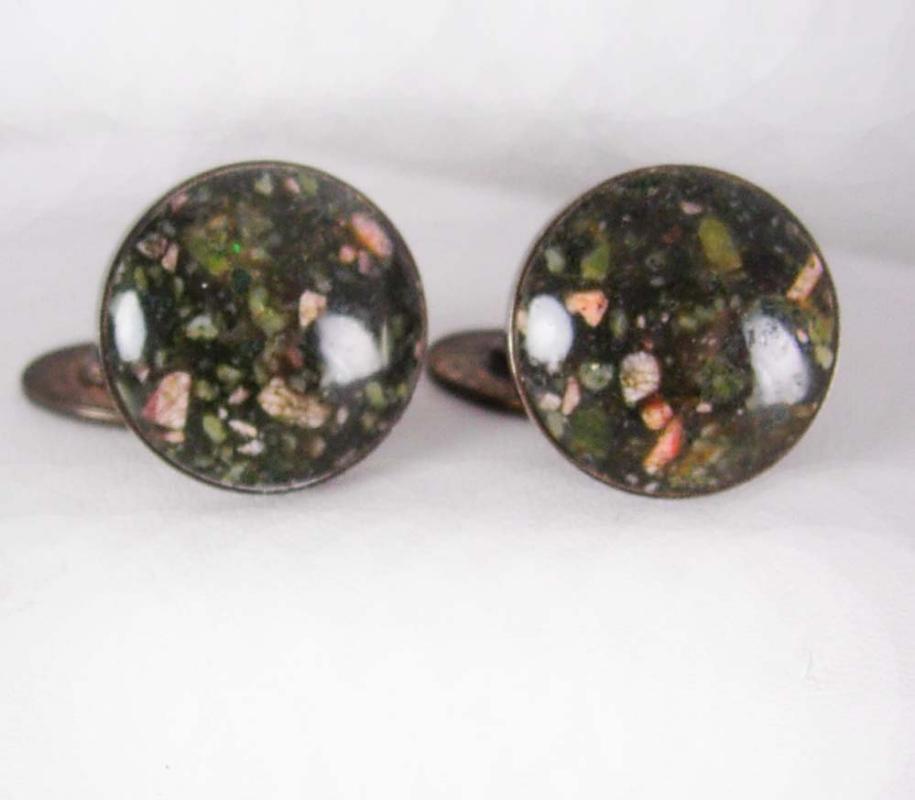 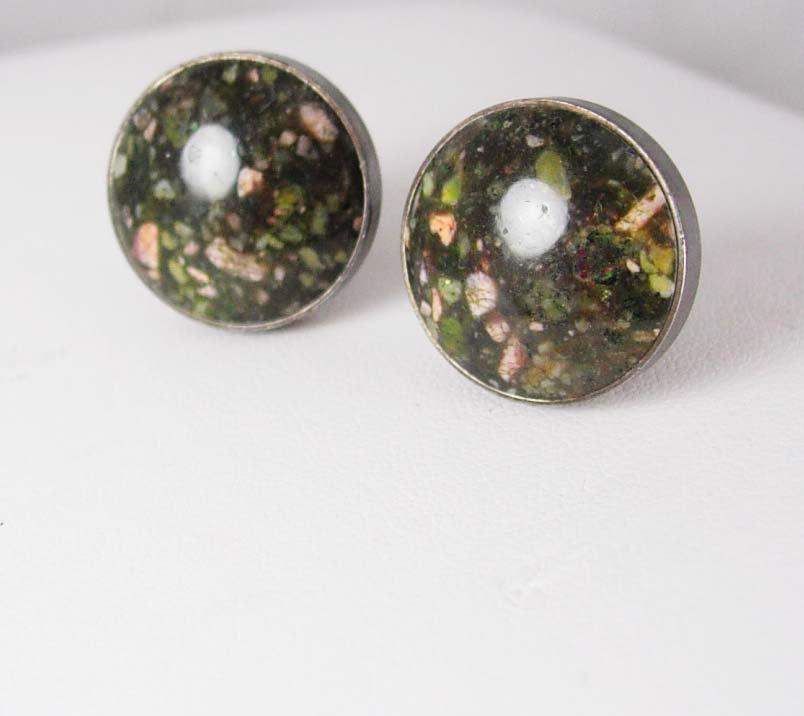 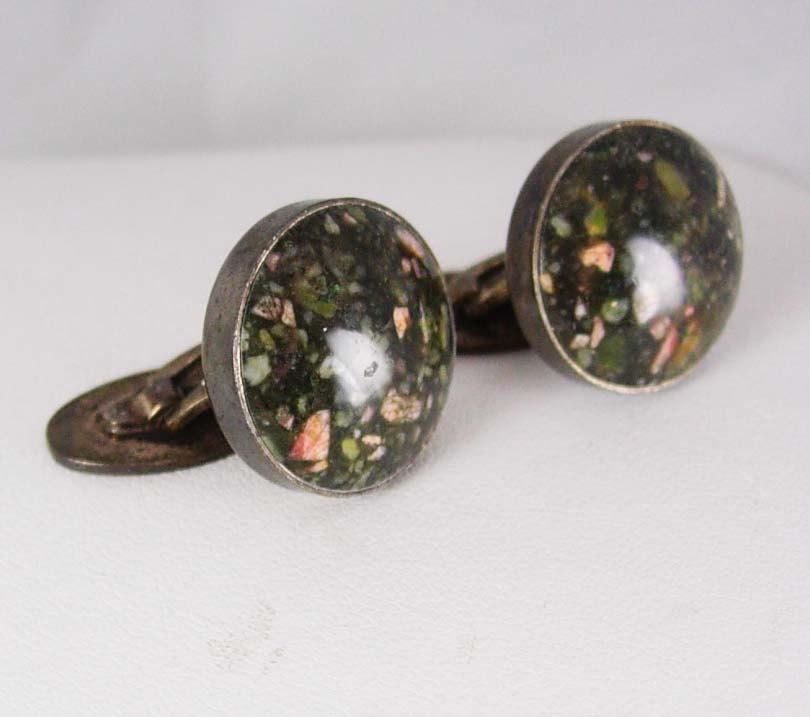 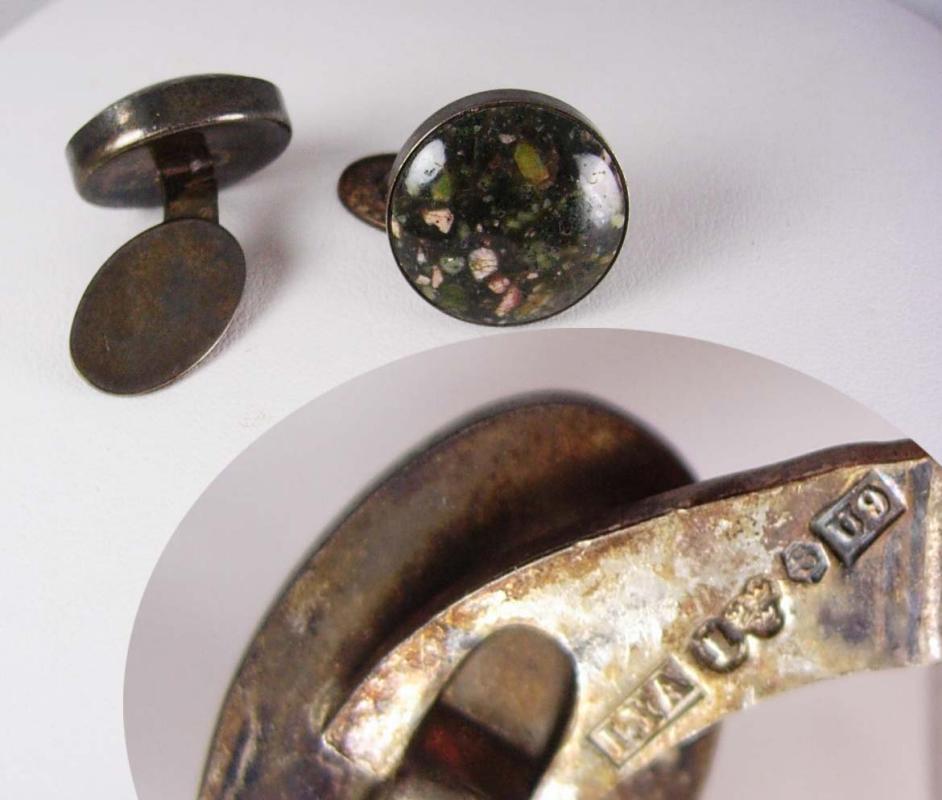 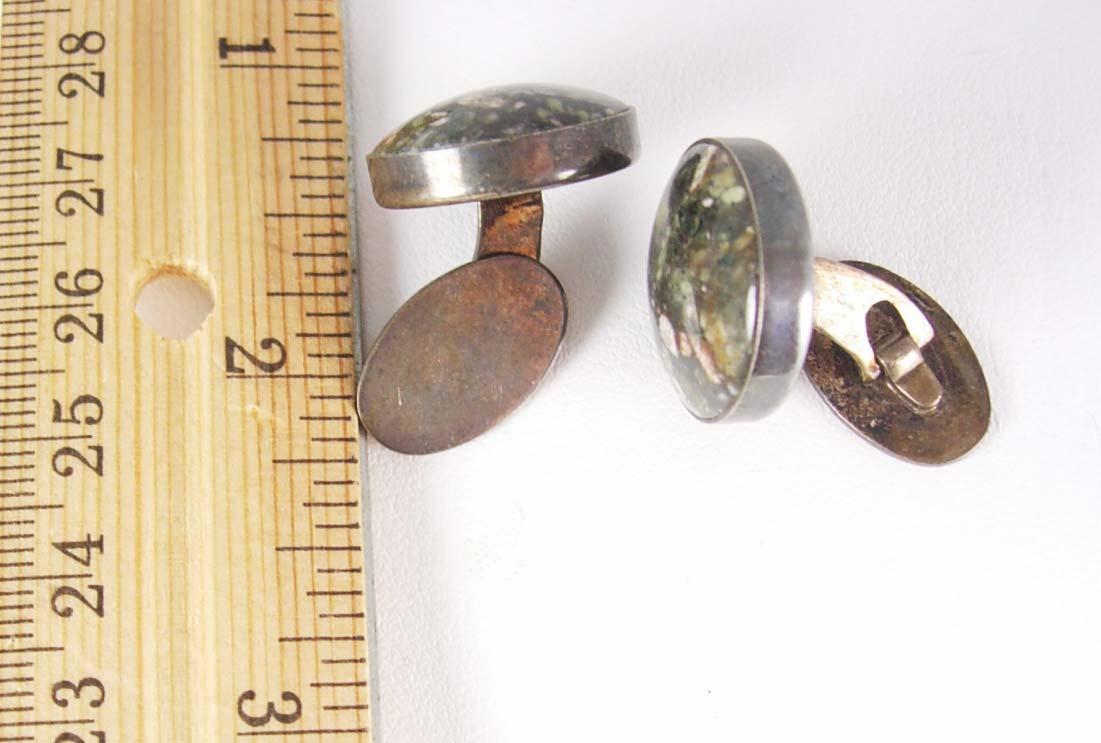 Hallmarked BLOODSTONE Antique Cufflinks Sterling Silver 13.8 Grams Clothing Accessory. A perfect addition to a collection or for a gift for that special someone. ∆ Maker: unknown but hallmarked ∆ Material: Bloodstone, sterling silver 13.8 grams The heliotrope or bloodstone was supposed to impart a reddish hue to the water in which it was placed, so that when the rays of the sun fell upon the water they gave forth red reflections. From this fancy was developed the strange exaggeration that this stone had the power to turn the sun itself a blood-red, and to cause thunder, lightning, rain, and tempest.The old treatise of Damigeron relates this of the bloodstone, adding that it announced future events by producing rain and by "audible oracles." Probably the conjurors, before proceeding to use the stone for their incantations, watched the heavens and waited until they noticed the signs of an approaching storm. They then interpreted the sounds of the wind and thunder in various ways, so as to give apt answers to the questions addressed to them touching future events. It is well known that the sighing of the wind, and, indeed, all those natural sounds which constitute the grand symphony of Nature, were interpreted by prophets and seers into articulate speech. Damigeron also declares that the bloodstone preserved the faculties and bodily health of the wearer, brought him consideration and respect, and guarded him from deception. There is a legend that says the bloodstone was formed from the blood of Christ dripping on the green earth and solidifying. It was also called heliotrope by the Greeks and was thought to bring change. The bloodstone has been used as an amulet to protect against the evil eye. Bloodstone is the symbol of justice. Healing properties of bloodstone The bloodstone is used for circulation of all energy in the body and helps to remove energy blocks. Bloodstone is used in the alignment of all the centers of the body. A healer must do this alignment while the patient lies on his stomach. It also aids in the circulation of blood. It is good to have several pieces of Bloodstone in the home to increase the flow of life energy. ∆ Size : see photo ∆ Weight: light/medium ∆ Condition: In good vintage pre-owned condition. ∆ Lovely patina! Boxed for gift giving; gift wrapped on request. These are part of a MASSIVE estate collection of cufflinks and jewelry so be sure to check out our other items here: https://www.etsy.com/shop/NeatstuffAntiques?section_id=all We don’t polish these previously owned well loved pieces so we can keep the original patina. We try and photograph all of the pieces next to a ruler so you can see the actual size. All jewelry sold as found. NOTE TO BUYER: We Do not offer engraving services of any sorts as we are not equipped to do so I’m sure your local jeweler would be happy to do so, sorry for any inconvenience thank you. All cufflinks ( unless otherwise specified) are considered costume jewelry. We use the descriptions of any stones from the manufacturers titles when they were first produced. When we refer to the stones as moonstone or jade or garnet, for example, we are using how the original manufacturer of the pieces used them. We cannot guarantee the authenticity of a stone in a costume piece of jewelry. June 10, 2014