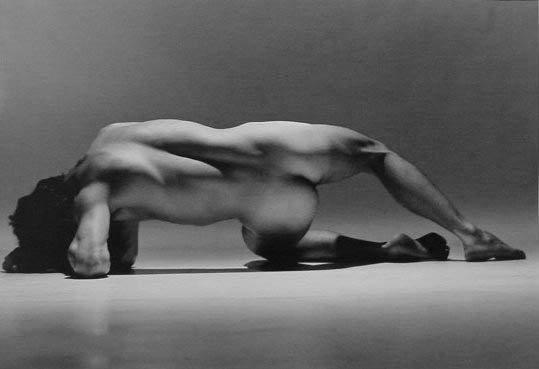 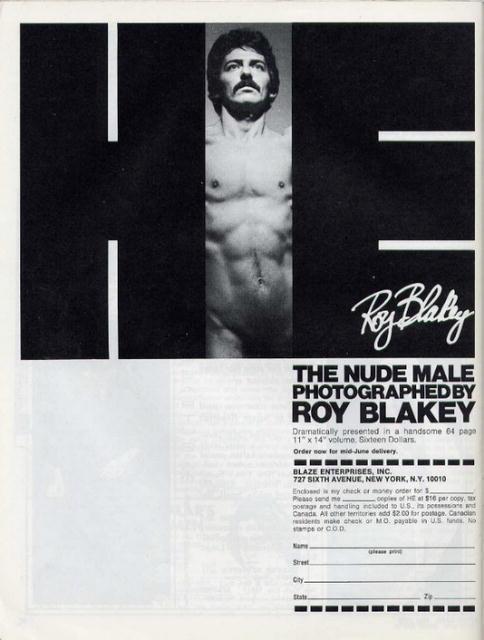 Signed, titled and editioned (edition of 40) in Blakey's hand with copyright stamp verso.

Roy Blakey's photographs of dancers, actors and other artists appeared in the legendary After Dark magazine in the 1970s. Working in the tradition of George Platt Lynes, Blakey uses light and shadow to create masterful images of nude men -- all the while evoking a unique '70s style. In 1972, Blakey published his ground-breaking book entitled He. Male nudes had certainly appeared in other mainstream photography books of the time -- including those by Kenn Duncan, George Hester, Skrebneski and David Vance -- but always published alongside female nudes. In Blakey's book the male nude proudly came out. These modern prints are the first of this work to be printed in many years.

Many more images by Roy Blakey are available; please inquire.

I remember very clearly the first time I saw a photograph by Roy Blakey. It was the fall of 1979, and I had just entered The University of Tennessee as a freshman. While working on a paper for a class, looking for back issues of a magazine in the university's Hoskins Library, I found a series of bound volumes of After Dark. I'd never seen or heard of the magazine, but as soon as I opened the first volume from the early 1970s, I was captivated. In one issue, a photograph showed a beautifully lit frontal nude of a gorgeous man with tousled blonde hair, kneeling, arms up. He was looking directly into the camera, unashamed. It was an advertisement for Roy 's book of male nudes, HE.

Published in 1972, HE was a groundbreaking book. Male nudes had by then appeared in other photography books - including those by Kenn Duncan, George Hester, Skrebneski and David Vance - but always published alongside female nudes. Blakey's book, devoted solely to male nudes, stood in stark relief.

This was a bold step for a man who'd grown up in tiny Enid, Oklahoma. At an early age - while watching a film starring the legendary ice champion Sonja Henie and her company of skaters - Roy was profoundly struck with the wonder of ice skating. He began a scrapbook of articles about ice shows and wrote to famous skaters for autographed photos. Determined to skate, but without an ice rink nearby, Roy became a champion roller skater. After graduating from Enid High School in 1948, he enrolled as a commercial arts major at the University of Tulsa - near a rink where he could finally train on ice.

Drafted into the U.S. Army in 1952, Roy was stationed in Germany as a mail clerk for an anti-aircraft unit. He achieved the rank of corporal, and bought his first good camera in the PX there, snapping pictures during his three-day passes. In 1954, after two years of mandatory military service, Roy joined the ice skating show at the Casa Carioca nightclub in Garmisch-Partenkirchen, Germany. He returned to the United States in 1956 and joined the ice revue of the elegant Boulevard Room at Chicago's Conrad Hilton Hotel. He also took his first courses in photography and housed a makeshift darkroom in his hotel bathroom. In 1961, he joined the company of Holiday on Ice and subsequently performed in nearly 40 countries on extended tours through Europe, Russia, the Far East and Latin America - always with his camera and darkroom in tow.

Retiring from the frozen stage in 1967, Roy stopped in New York for a three-day visit that stretched into 25 glorious years. He and his makeshift darkroom took up residence in a loft above Billy's Topless on Sixth Avenue, where a host of entertainment stars and hopefuls ascended the stairs to his studio to have their photographs taken. All the while, Roy was creating the masterfully lighted male nudes that comprise this collection, some of which were included in HE. Flash forward. Nearly 20 years after I became aware of Roy's work, not only did I eventually find a copy of HE for myself; ultimately, I found Roy Blakey, as well. One night while checking my E-mail, I searched the AOL member directory and found a match in Minneapolis, Minnesota. I drafted a brief note stating that if the recipient was the famous photographer of male nudes, I was a fan of his work, and that I believed it deserved to be exhibited and published again. A reply came back to me the next day, and our friendship began.

Over the next several years, I made a number of trips to Minneapolis to work with Roy, unearthing the gems you see here. Not only have we worked shoulder-to-shoulder - we've become dear friends. He has been exceedingly kind in crediting me for what he calls his "resurrection," but none of this would have been possible without Roy's unique vision, his passion behind the camera and his skills in the darkroom. He is, after all, not only the creator of these images, but also the magician who has brought them to life on paper. I consider myself fortunate to be the magician's assistant. (copyrght 2002, Reed Massengill)