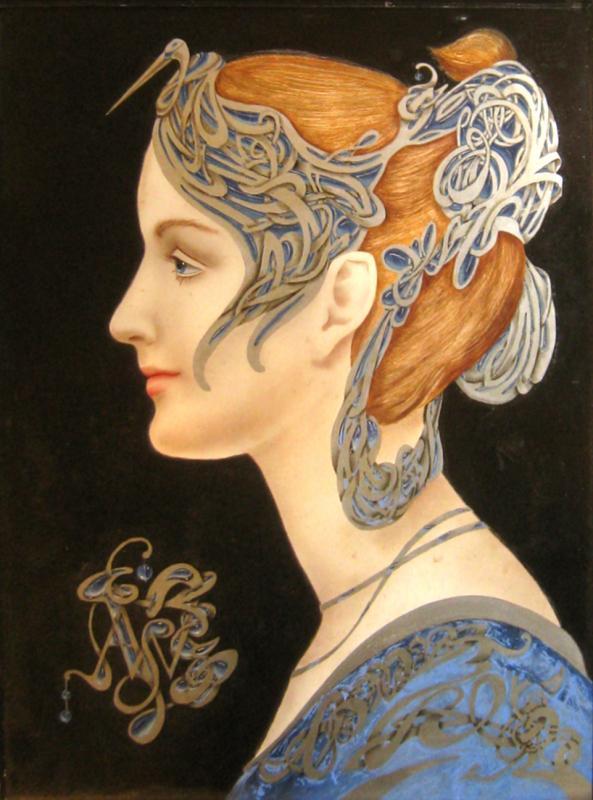 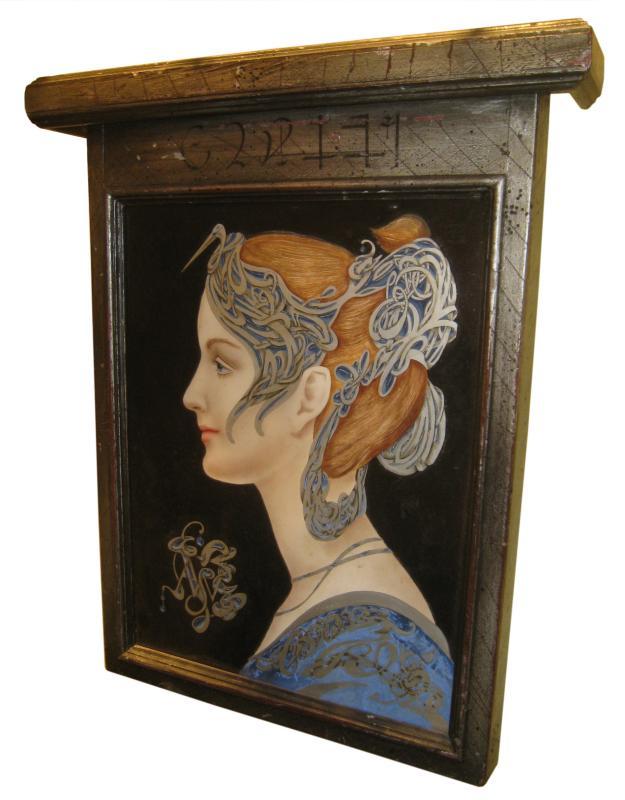 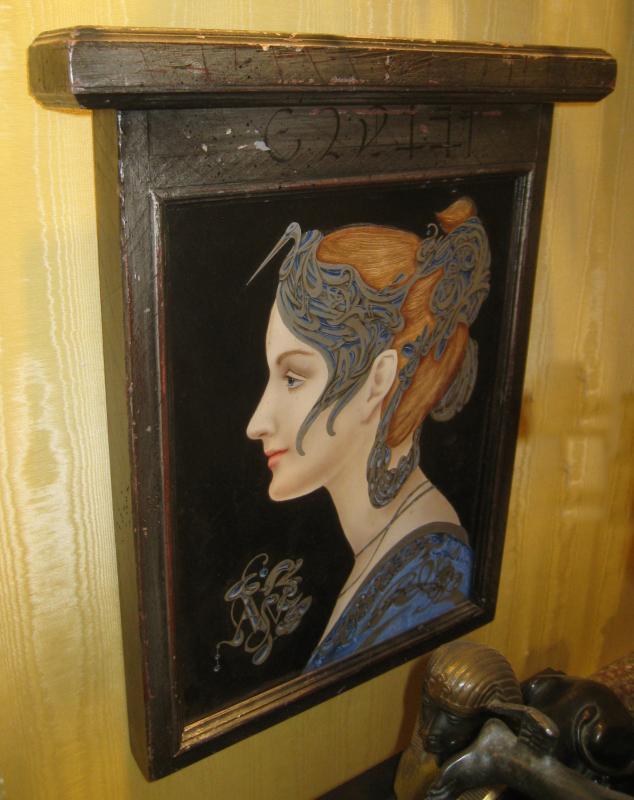 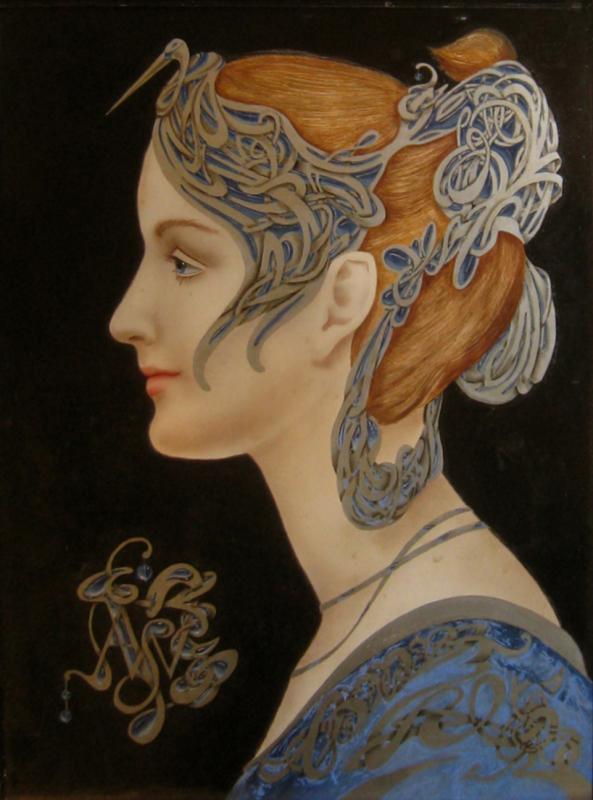 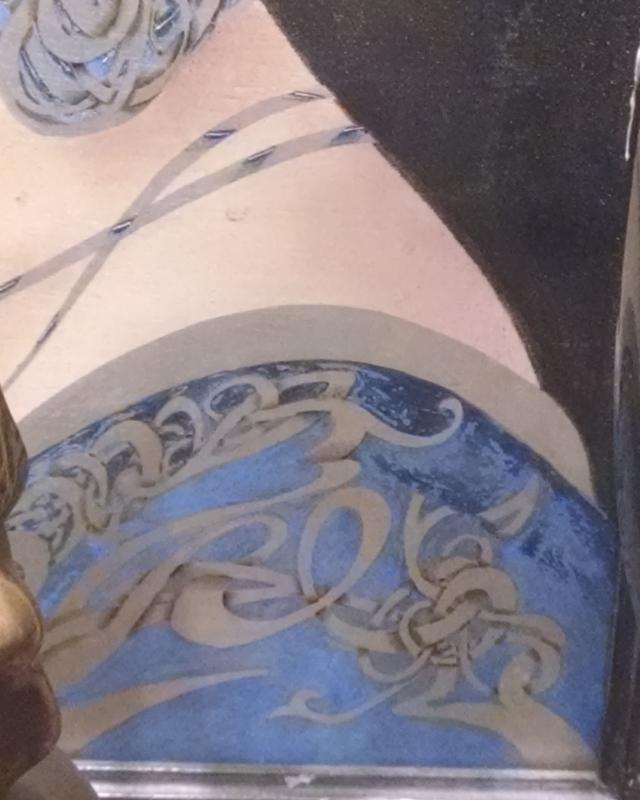 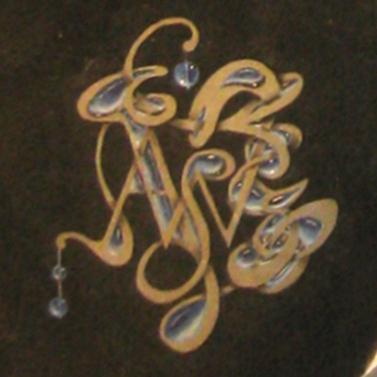 Our exceptionally painted and rare surrealist profile portrait on panel in the Renaissance style by Arthur Wood (1931- ), circa 1960s, depicts a beautiful woman wearing an elaborate headdress with Stork-like beak.  It is mounted in a limed tabernacle style wooden frame.  There are two monograph signatures painted in an intricate and distorted manner and a title for the work painted onto the top face of the frame.  Panel, excluding frame, measure approximately 19 by 24 inches.  Item sold as is. All sales final.

Mr. Wood is known to have exhibited works in this style at the influential Louis K. Meisel gallery at 141 Prince Street in the SoHo art district in Manhattan.  Meisen (1942- ) is the noted collector and dealer of the photorealist art movement, and in fact, coined the term back in 1969.  He and his wife, Susan, are thought to own the elargest collection of photorealism artwork in the world.

The artist was born in Saratoga Springs in 1931. After serving in the Korean War, he attended college on the GI Bill, studying at Pratt Institute, the American Institute, Columbia Teachers College, and Yuba College in California. Wood is likely best known for Broken Angel, an innovative house-as-sculpture in Brooklyn that he purchased with his wife Cynthia, at auction in 1979.  Originally four stories and run down from years of vandalism, he ultimately built a work of art spanning ten stories with stained glass windows crafts from bottles.  It was featured in the film, Dave Chappelle's Block Party.  Wood vacated the building at public order after a fire there in 2006.  Following the passing of his wife, he moved to Beacon, New York.

Mr. Wood is the subject of the new documentary film, A Castle in Brooklyn, King Arthur, directed by Tyler A. Chase for L'Orage Productions. The film and its maker have received notable critical acclaim and awards, including the New York Cinematography Awards (2019 finalist), Albuquerque Mindfield Film Festival (2019 Gold Award winner), Documentaries Without Borders Film Festival (2019 winner), among others.