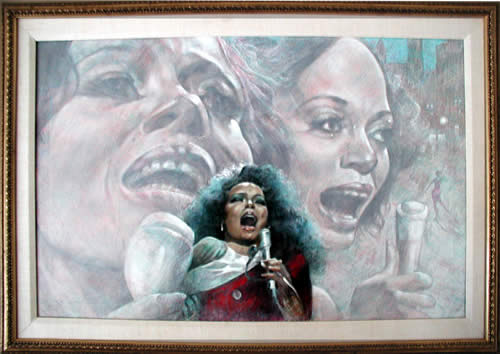 
Raymond Howell began painting when there was little public interest in African American art, and he tried during his lifetime to serve as a role model for artists in bringing images of African American culture to a larger public. He was especially committed to promoting arts education opportunities for minority children.

Raymond Howell's paintings are based in realism, with eclectic influences of surrealism and impressionism. In recent years he has experimented with collage, mural painting and printmaking and has created series of works on such subject matter as jazz musicians who were innovators in their art form. An artist whose work focuses on African Americans, Howell describes himself as a role model for artists who have traditionally been reluctant to paint African American subjects.

Howell has been a longtime fixture in the Bay Area art scene. In the mid-1960s he opened Art Associates West, a gallery and art school in San Francisco's Haight-Ashbury district, which operated for nearly a decade. Howell's 1965 painting "The Brown Family" was shown at the opening of the Oakland Museum, and was later purchased for the museum collection. His work has been exhibited widely throughout the United States, and in 1999 Stanford University presented a 40-year retrospective of his paintings.