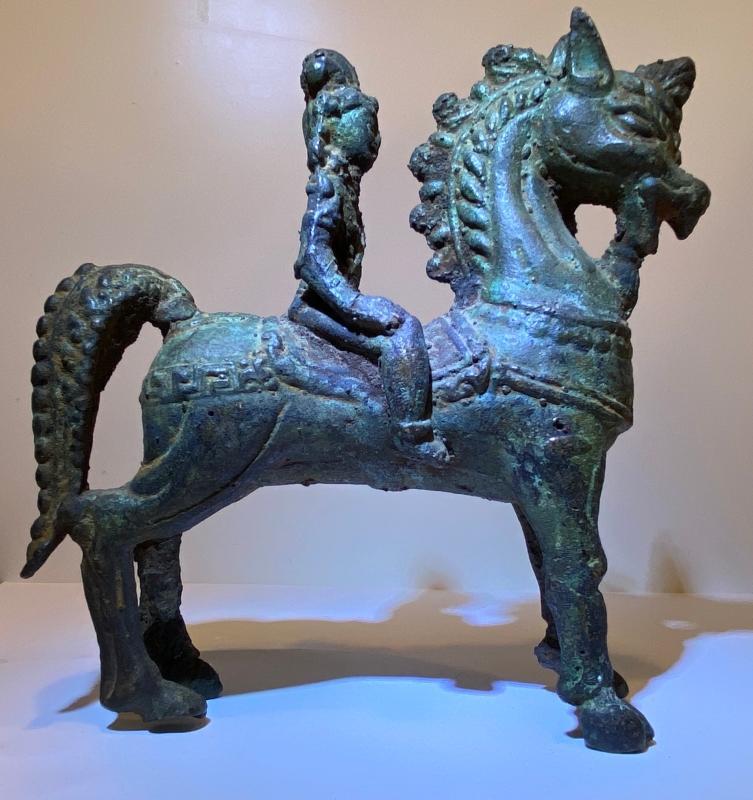 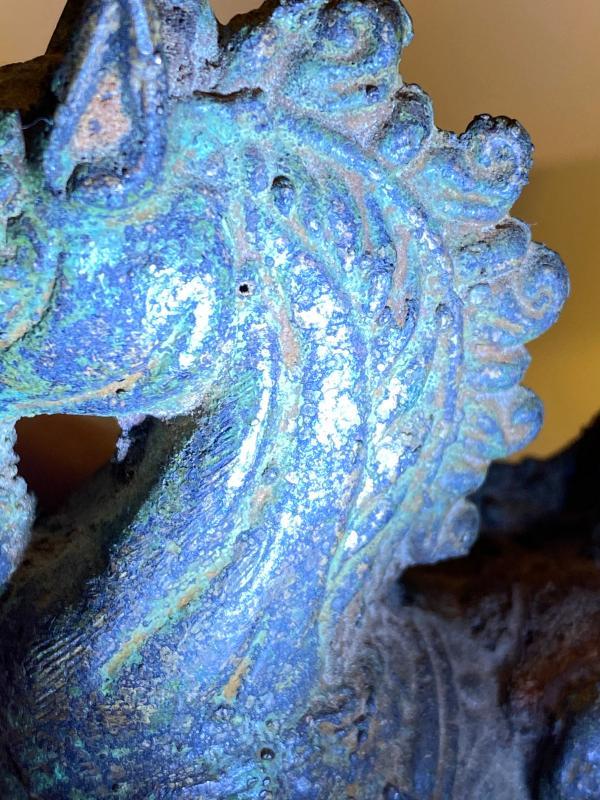 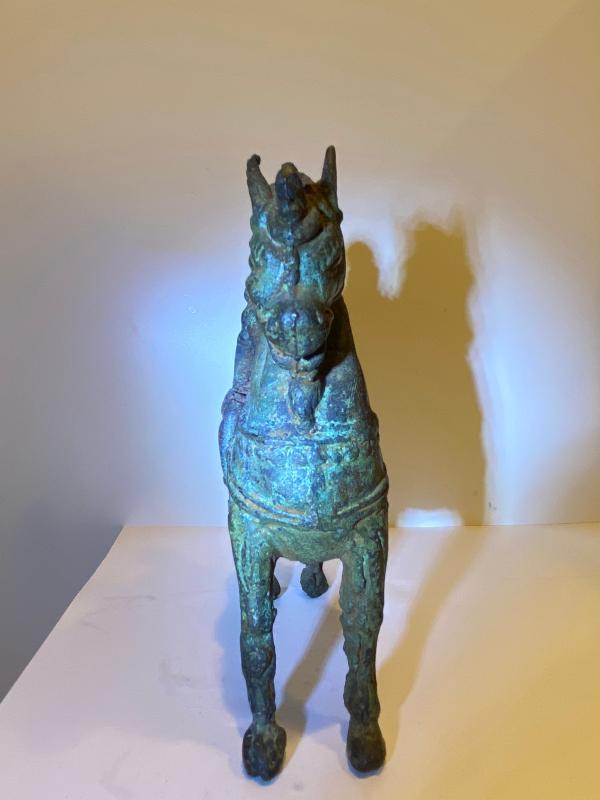 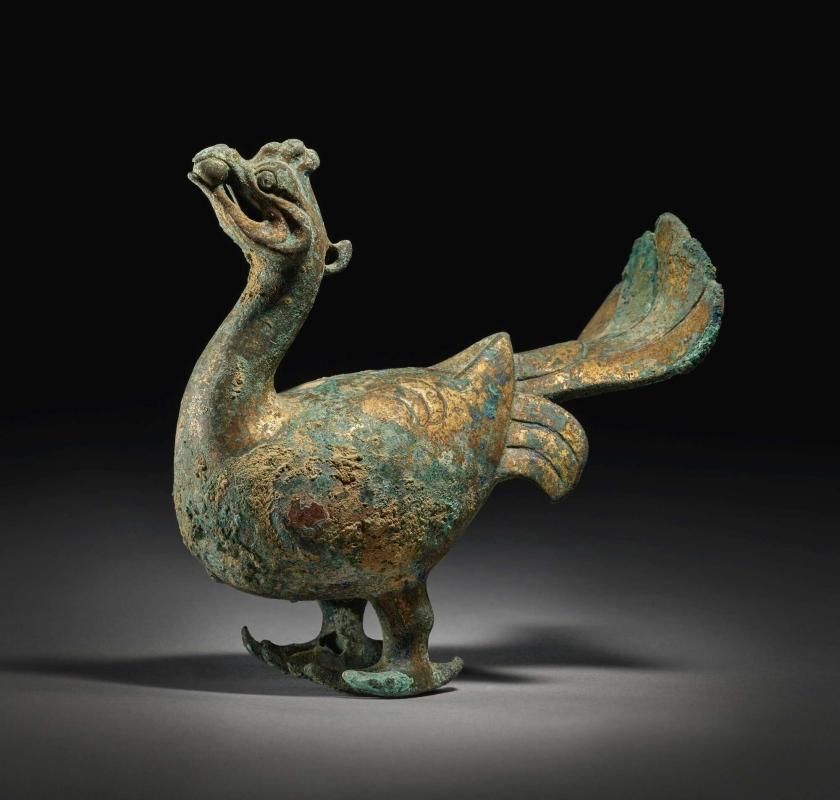 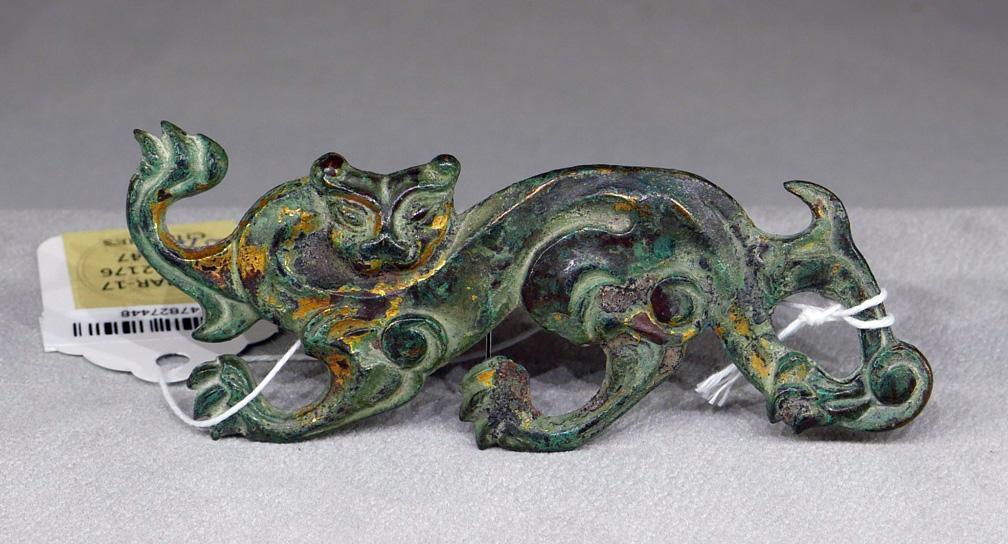 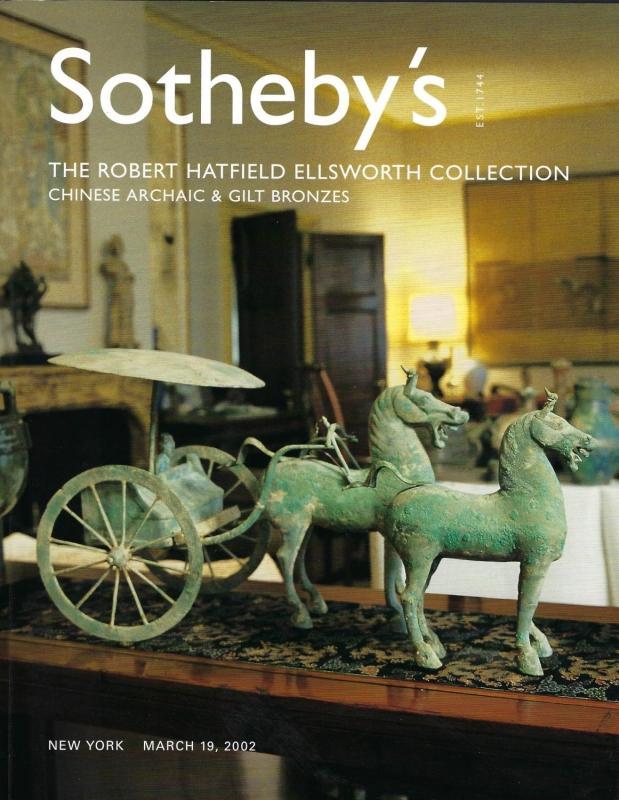 Imperial Horse and Rider (206 BC – 220 AD) is an exceptional gilt bronze figure, that epitomizes the thriving artistic tradition of equine representation during China’s Imperial history. Horses have long had an association with rank and privilege in China and from the Bronze Age onwards, there has been a spiritual and artistic fascination with them. The largest quantity of extant examples of Han dynasty horse sculpture are preserved in ceramic: far more ambitious than the pottery sculptures were those cast in bronze. Cast in intaglio, Imperial Horse and Rider is an unparalleled example which translates the majestic nature of the Horse in China, into a detailed visual art form. While depictions of Horses and Riders are known objects in Chinese antiquity, the present example, Imperial Horse and Rider is a true, rare ancient from a lost civilization, hailing from the same period of Qin Emperor, Qin Shi Huang (259 BC – 210 BC).

There are no other close counterparts of museum quality figurines in this form being offered, and none matching the present example in quality, clarity of decoration, balance, or importance. Imperial Horse and rider is an exquisite depiction of a prized caparisoned Arabic horse, modelled in fine detail, decorated in orientalist motifs and a meander pattern, exemplifying both creature and rider. The Skilfully modelled horse is standing foursquare, with a slightly lowered head facing forward, giving the impression of both noble strength and quiet intelligence. Masterfully etched lines portray the animal’s large eyes, flaring nostrils, and muscular jaw, framed by characteristic gaping mouth and snarled lips. A pair of large upright ears are flanked by a and well-dressed mane extending to a broad arched neck, while a conical entwined horn or *Zhi, sits atop the animal’s head. The Regal Rider of the horse sits astride with hands stretched out as if holding the reins, and adorned with an elaborate top knot of hair, fine jewellery, and formal costume – all conveying an impression of high esteem.

*One of the most enduring unicorn legends comes from China and during the Han dynasty court officials wore the symbol of the Zhi (mythical one-horned beast) sewn into their robes and hats.

Horses are remarkable for their powerful stylisation of artistic form, by means of which the bronze artist has skilfully succeeded in conveying the alert strength of the animal. Imperial Horse & Rider is a formerly richly gilded figure belonging to a small group of exquisitely modelled tomb treasures, deemed precious enough to be presented to kings and high nobles as tribute.  Imperial Horse and Rider is a genre of extremely rare objects that are found only in very highly prestigious burials. The horse itself was a potent image during the foundation of imperial stability that would in turn encourage trade and prosperity over a vast empire, and such pieces were sent as tribute to the emperor. Horses were also a sign of wealth: strict sumptuary laws limited the use of the horses to people of a certain rank. In style and subject matter, horses and riders are emblematic of funerary sculpture. The practice of using bronze figures of horses as tomb furnishings followed the example set by the first Qin Emperor, Qin Shi Huang (259 BC – 210 BC), in whose luxurious tomb they appeared for the first time.

In the Western Han Dynasty (202 BC – AD 220), new horses became the status symbol of prestige and wealth. These horses were portrayed in figurines, which were placed in the tombs of Emperors and high officials. The bronze horses excavated in 2nd century AD in Gansu Province match the description of the Arabic horses, in that both have a deep girth, a small head, a typical dished-face, crested neck, long main and a tail carried high and arched. Due to the level of craftsmanship of Imperial Horse & Rider, the quality, distinctive modelling, and expressive style of this gilt-bronze figure can be accurately distinguished as an Arabic Horse.

Scientific archaeological excavations undertaken in China have revealed the existence of fragments of grey terracotta moulds used during the casting of bronze vessels. These discoveries proved beyond a doubt that at the beginning of bronze production in ancient china, bronzes were produced by multi-mould casting. The fragments of moulds found at the excavation sites enabled archaeologist to establish with precision the different steps taken by the artisans in the production of a bronze vessel: First a matrix of the desired vessel was made in terracotta. The terracotta matrix was an exact copy of the final product, bearing the same degree of fineness and decoration desired for the bronze vessel. The matrix was then completely covered over with fine thin layers of clay to a thickness of 15 mm, which would eventually serve as the negative. After baking, the negative was cut off in pieces, which would then become the parts of the mould. These parts were then assembled and set in a tub or tray of sand. Then a plain inner core was made and surrounded by the pieces of the mould, which were placed in such a way as to leave an empty space of from 5 to 15 mm between the core and the assembled pieces of the mould surrounding it. Finally, hot liquid bronze was poured into the space between the core and the assembled mould. After cooling off, the bronze vessel, (which was usually cast upside-down), was removed from the mould. On many bronze vessels mould marks or seams can be detected on close inspection. On the highest quality pieces like Horse with Rider, such marks are barely perceptible. Another technique known as lost wax casting was first utilized in China around the 5th Century B.C and consisted of making a wax model on a brick-clay core of the same size as the desired bronze vessel. The decoration was then either carved by hand or stamp printed with the aid of a matrix, (circa 475 – 221 B.C). Once the decoration was completed, the wax object was bathed, once, in a small layer of liquid clay containing a resistant substance, then in several more layers of regular clay which thus formed a covering around the vessel. On contact, the liquid bronze poured into the space between the core and the outer clay covering causing the wax to melt and escape through special openings left in the outer covering simultaneously filling the space left between the matrix and the outer layer.

Imperial Horse & Rider stands balanced and complete with minor areas of loss. There are no chips or damage to be observed other than those consistent with the age of such an antiquity. A network of stabilised corrosion mechanisms uniformly circumnavigates the bronze body’s exterior, with is a sediment of cuprite and malachite growth on the surface. Small recesses, spots and pits are observed, consistent with those that only appear on the oldest existing pieces. Chinese, Bronze Tomb objects exceeding a certain age, normally show corrosion associated with burial conditions and are known as the item’s burial patina. These results are in accordance with and the characteristic features of Chinese Gilt Bronze tomb objects from the Han Dynasty (206BC – 220 AD).

Please contact the seller for more information regarding this item.