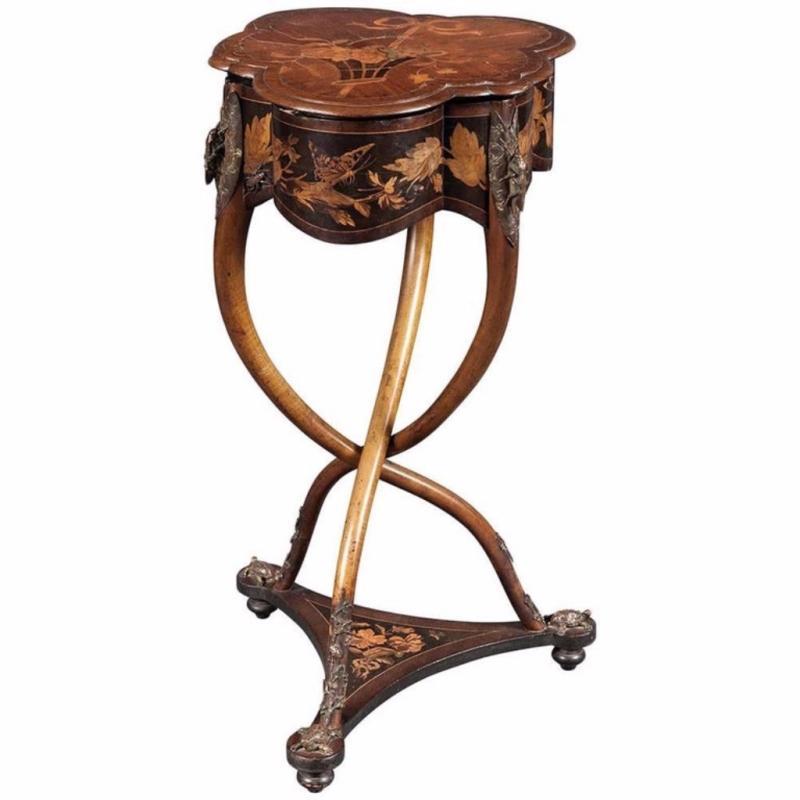 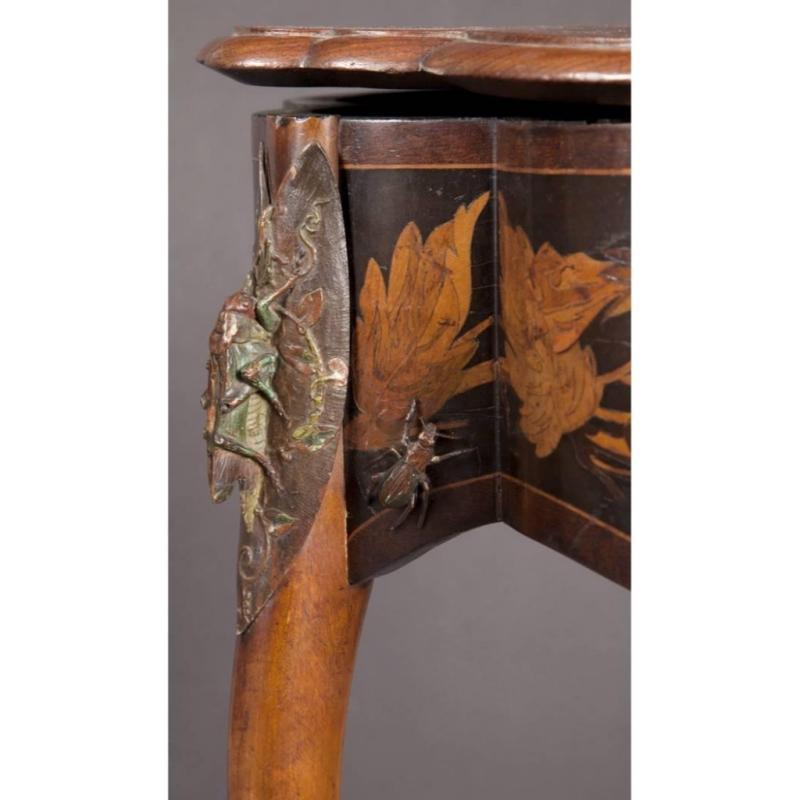 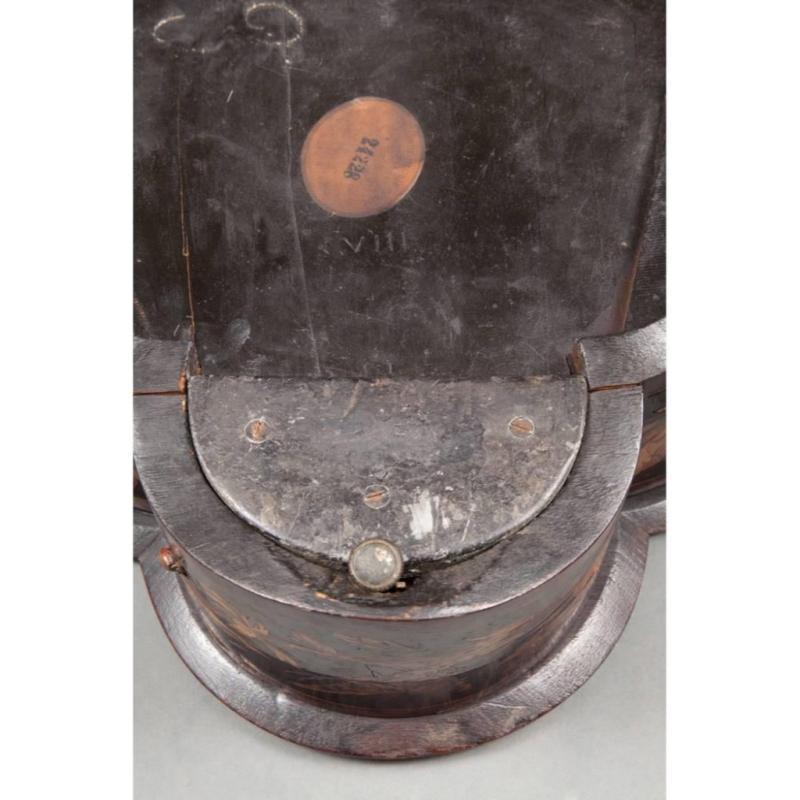 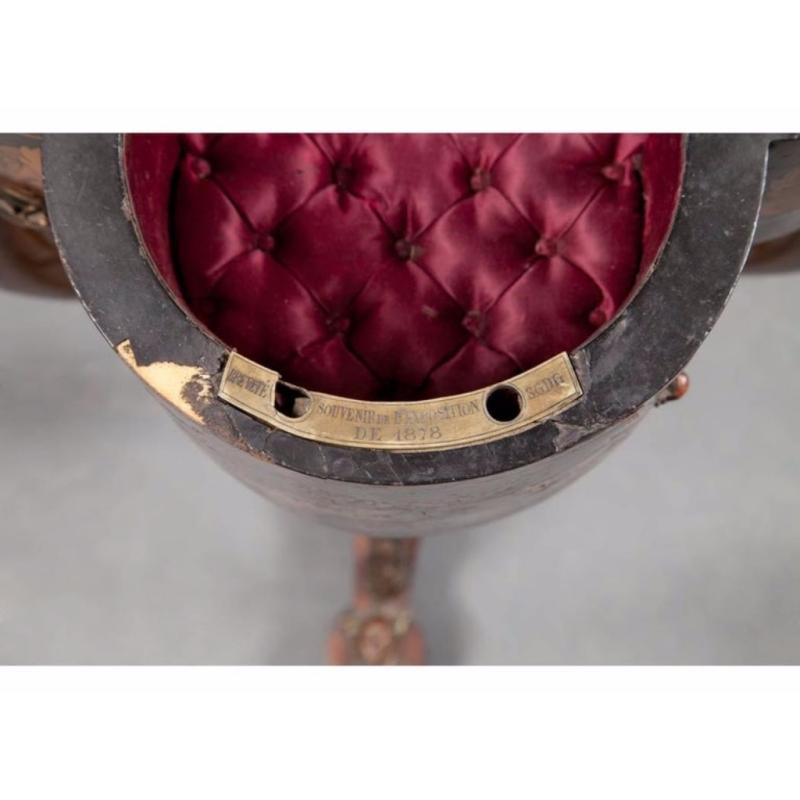 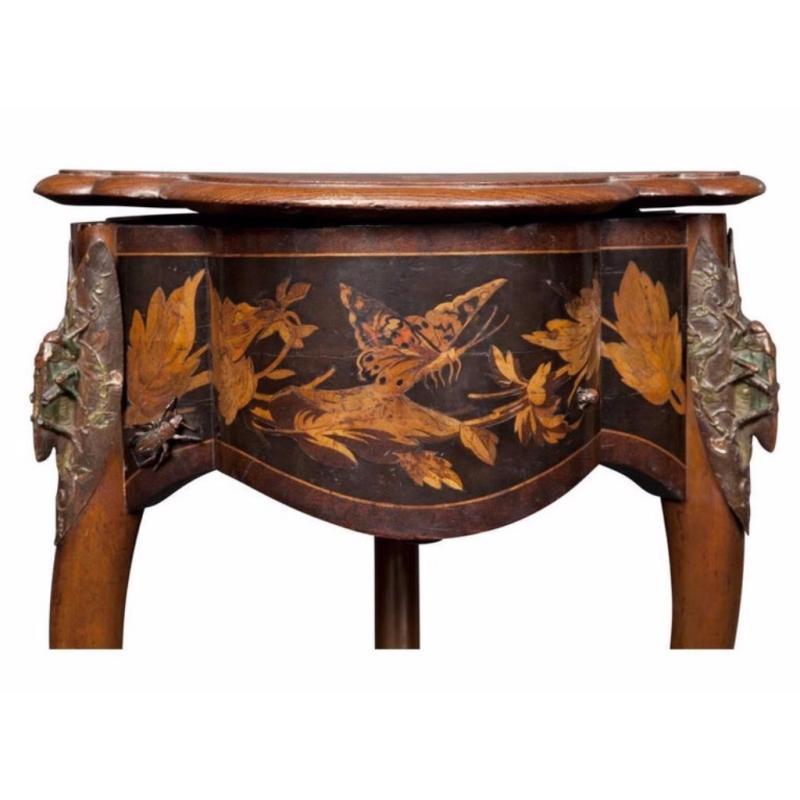 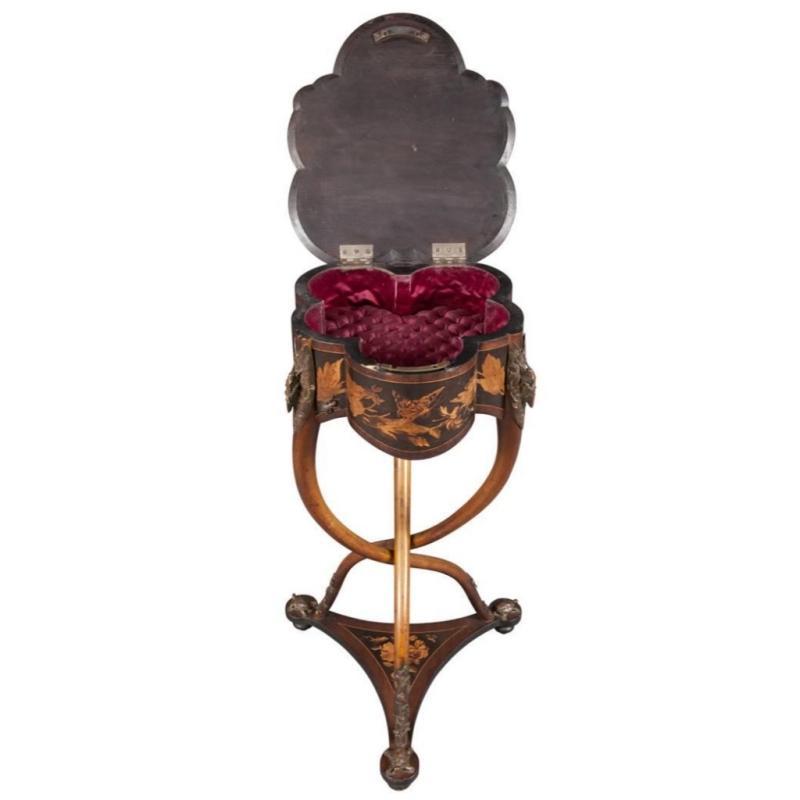 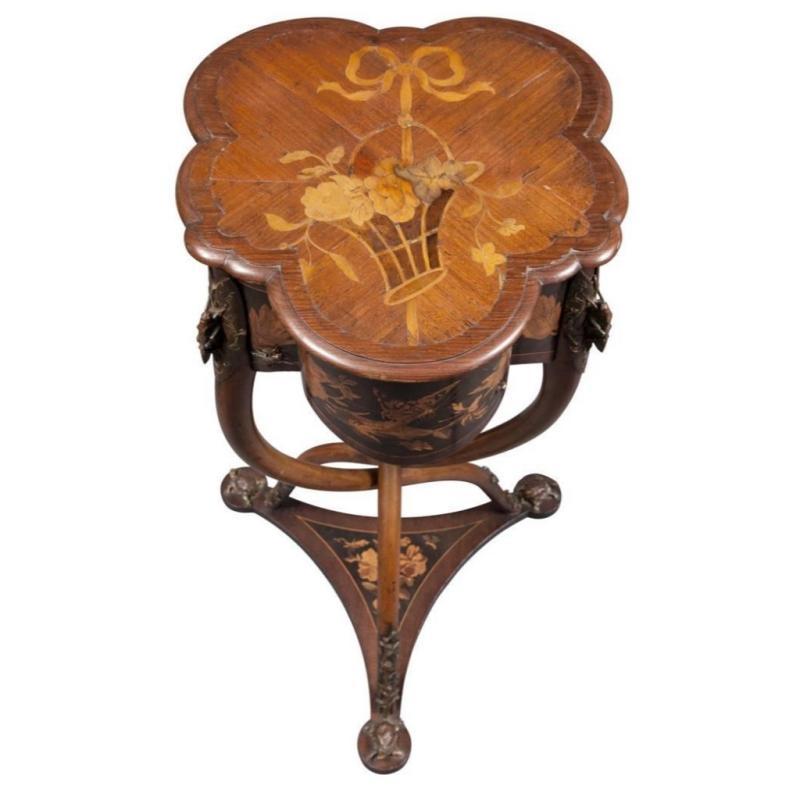 Charles-Guillaume Diehl A rare and fine cold-painted and enameled copper mounted fruitwood inlaid table Paris, circa 1878 The table, opening to reveal a cushioned interior in red silk, raised on three intertwined curved legs with the front ones mounted with grasshoppers seated on stylized leaves, one by a beetle, on triform base centering a spray of pansies and a bumble bee, terminating in rounded corners, each surmounted by a turtle, the lock-plate inscribed BREVETE SOUVENIR DE L'EXPOSITION/DE 1878/S.C.D.G. Measures: Height 28 3/4 in.; maximum width 17 in. Of German origin, like many 'French' cabinetmakers since the eighteenth century, Charles-Guillaume Diehl (1811-1885) settled in Paris in 1840. He established a large atelier at 39, rue Saint-Sebastien. By 1870 he employed no less than six hundred craftsmen. His trade in cabinet making and fancy goods flourished and Diehl participated in all major international exhibitions during the middle of the nineteenth century, starting with the Great Exhibition in 1851, and frequently being awarded. The list of his deliveries to the Industrial Arts Exhibition in Paris in 1861 gives an idea of his production. The model for the present table was executed for the Exposition Universelle of 1878 in Paris. This is more of a vanity table, it could have been used for keeping ribbons and jewelry. However, the cushioned interior may also have served as a pin cushion. Both composition and style of the table herald the Art Nouveau taste. The delicate marquetry shows the typical botanical repertoire whose realism is accentuated by the naturalistically modelled small animals and foliage applied to the table, meant to enhance the illusionist effect. Distinctly varying from the aesthetic conventions that dominated the decorative arts at the time, Diehl's table is very much avant-garde for 1878. Borrowings from iconographic sources dear to Japonism and the repertoire of floral and foliate motifs which were to become essential characteristics of Art Nouveau make this table a fine example of the aesthetic transition that occurred around 1870-1880. For comparison see an almost identical table sold Sotheby`s Amsterdam, Furniture, Clocks & Decorative Arts April 7 2009, lot 408 that sold for 45,150 Euros Similar tables have been exhibited in: Similar tables are at the Musée d'Orsay, Paris, and the Museum für Kunstgewerbe, Frankfurt. This table has been published in several different books: Margit Bauer e.a., Europaische Möbel von der Gotik bis zum Jugendstil, Museum für Kunsthandwerk, Frankfurt 1976, no. 246. Daniel Alcouffe e.a., Le Arti decorative alle grandi esposizioni universali 1851-1900, Milan 1988. Odile Nouvel-Kammerer, Le Mobilier français. Napoléon III. Années 1880, Paris 1996. Philippe Thiébaut e.a., Un ensemble Art Nouveau. La donation Rispal, Paris 2006.