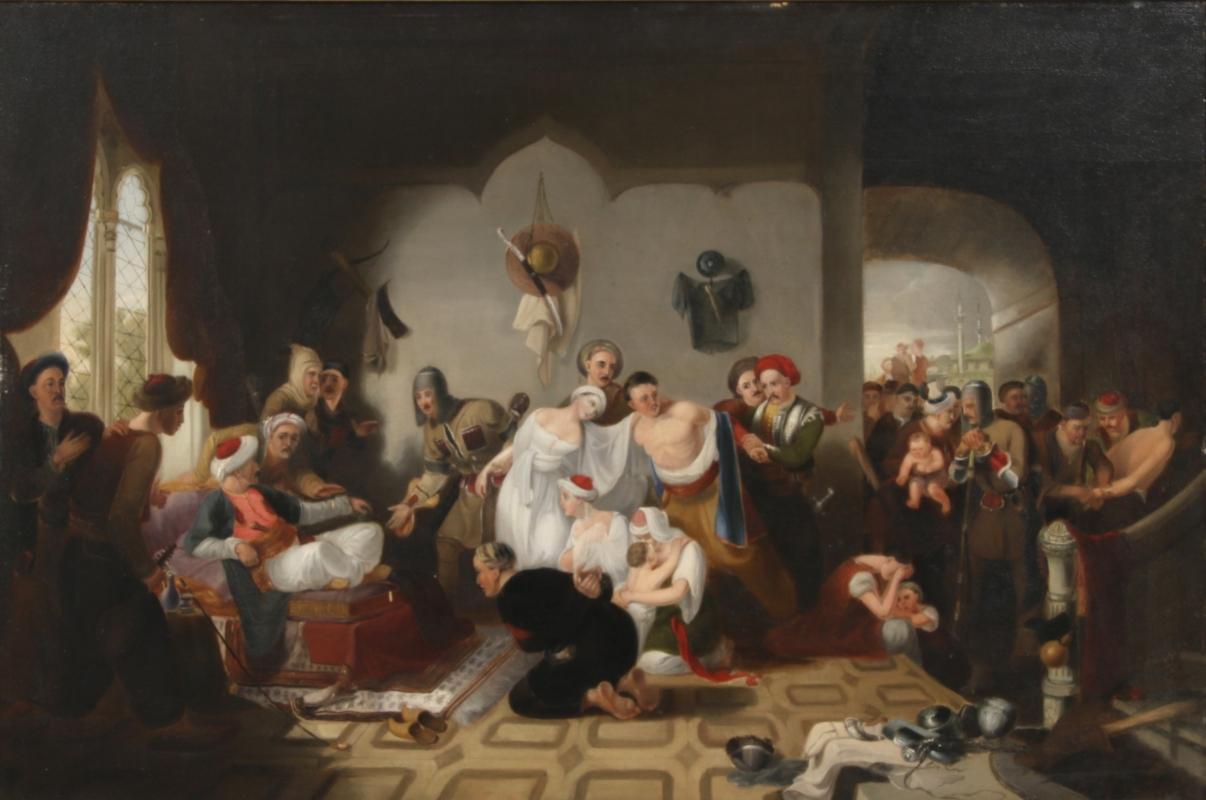 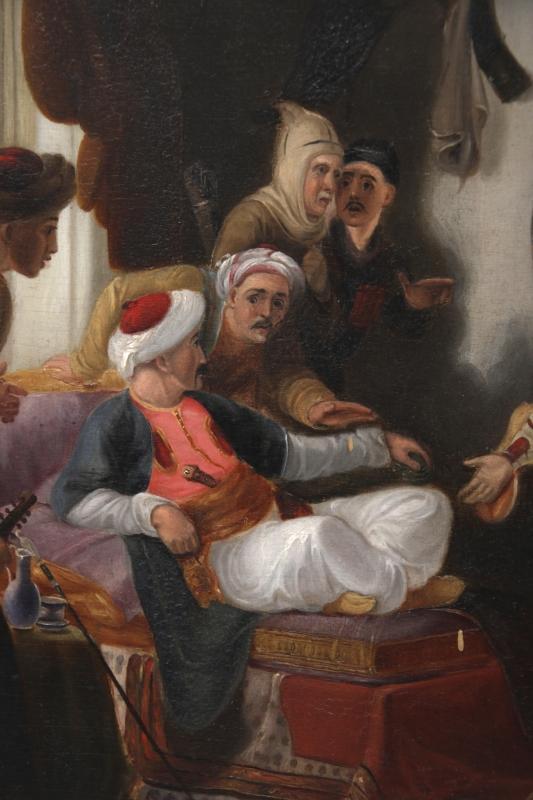 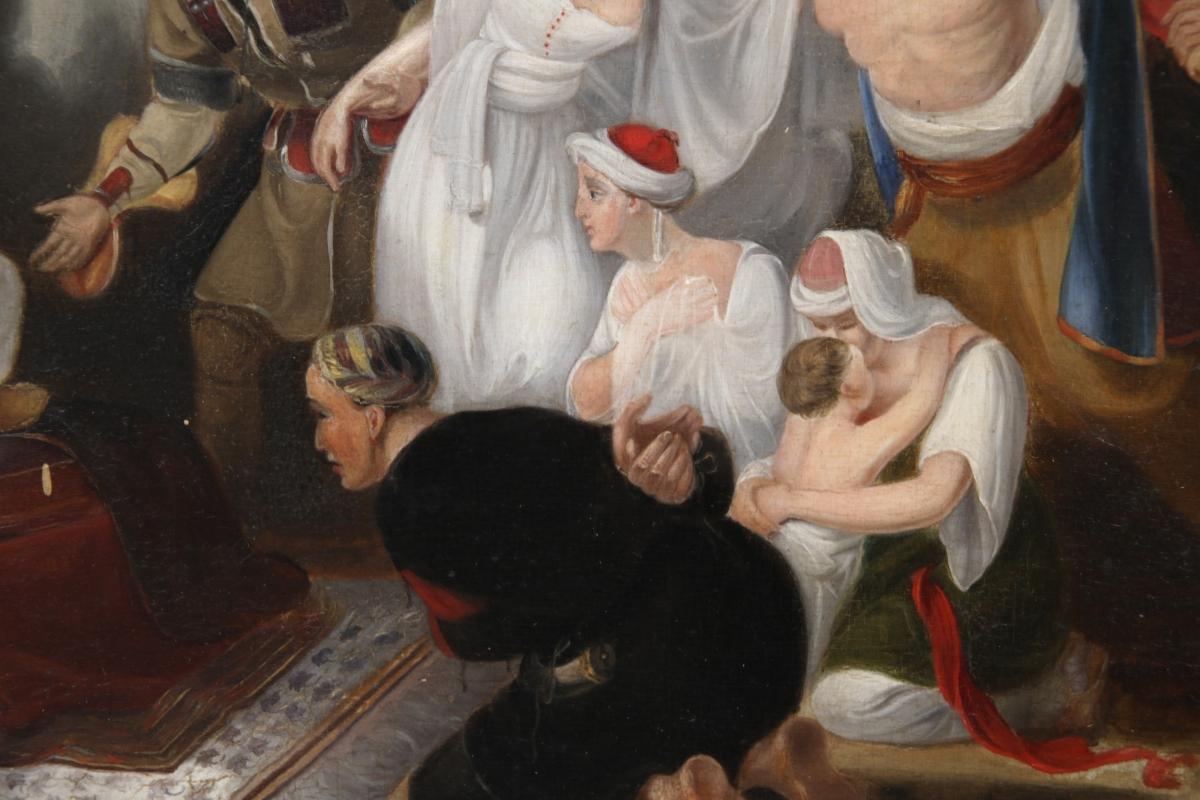 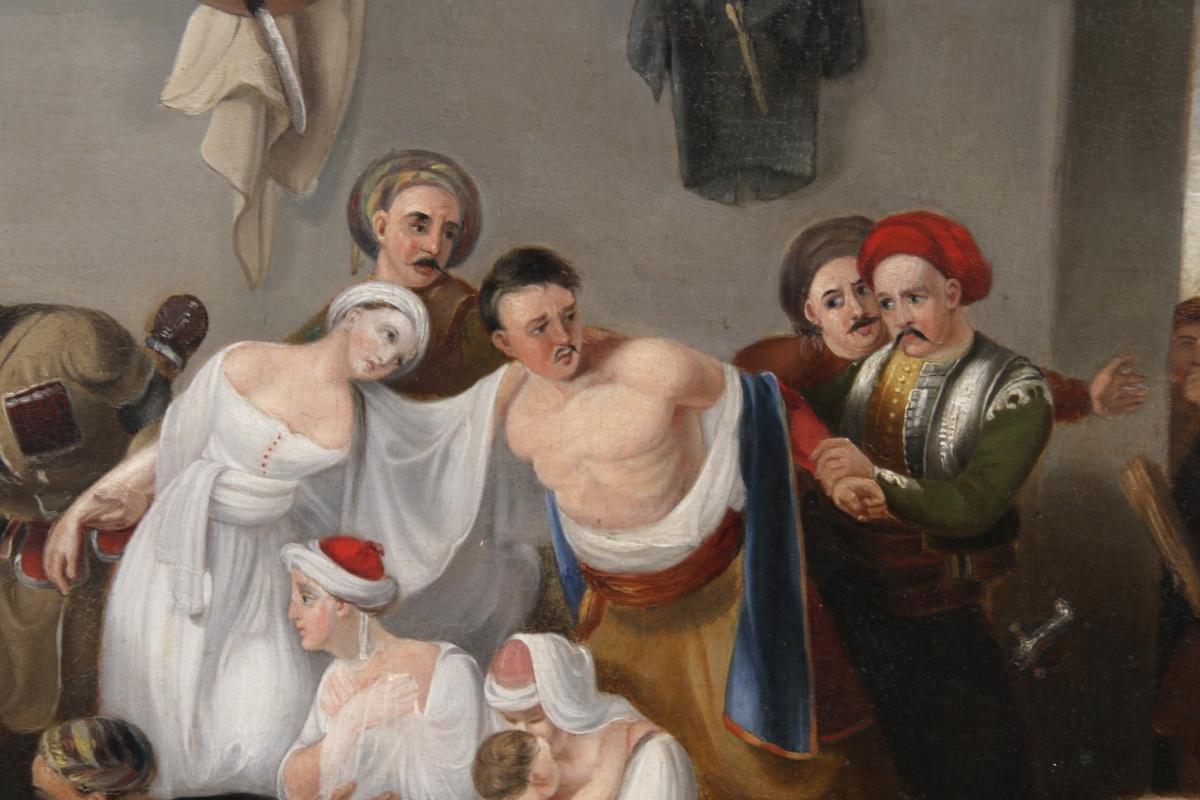 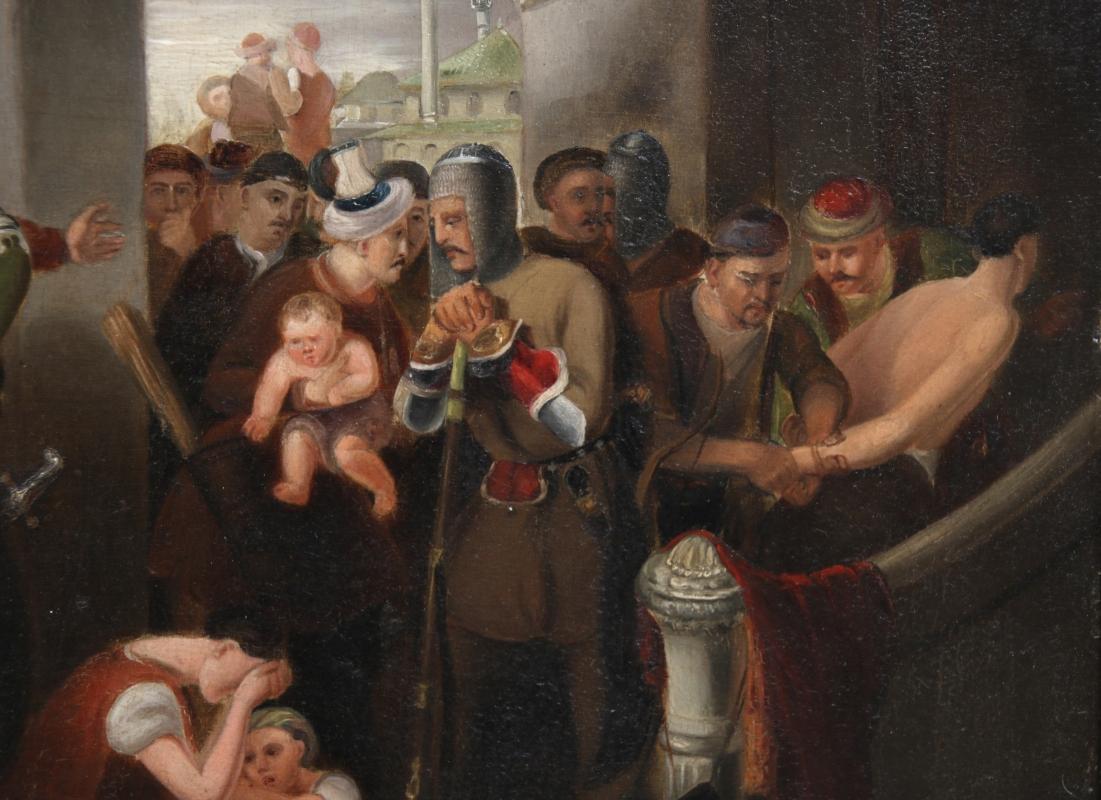 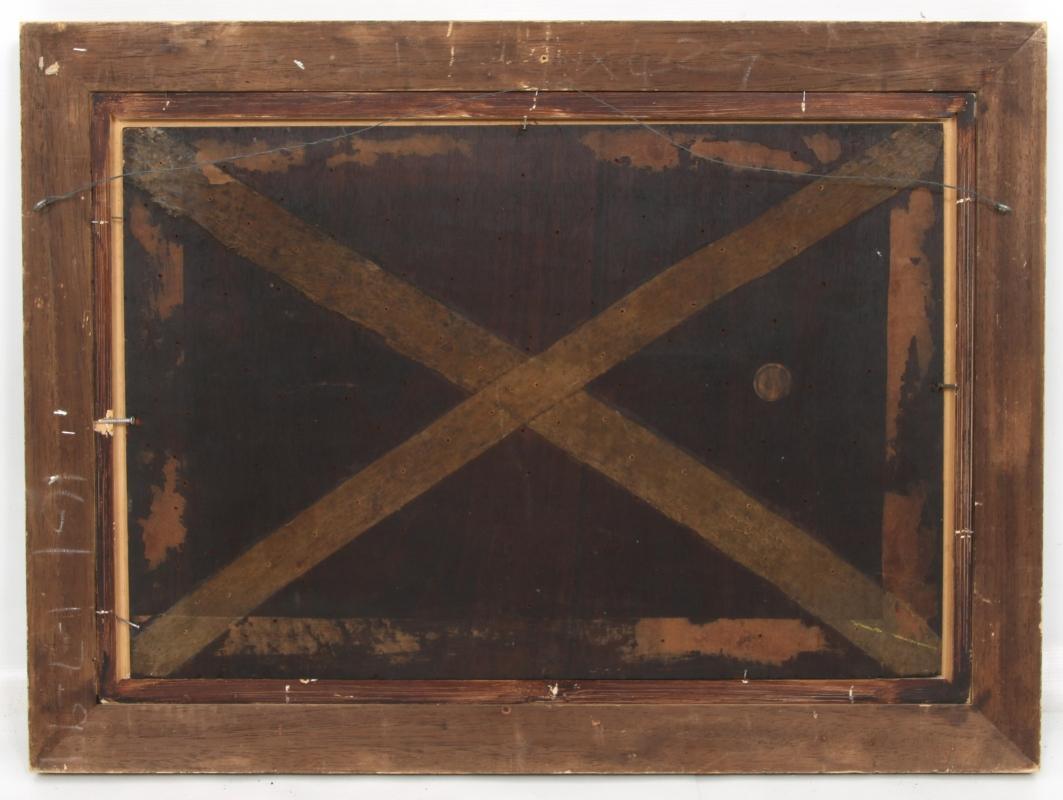 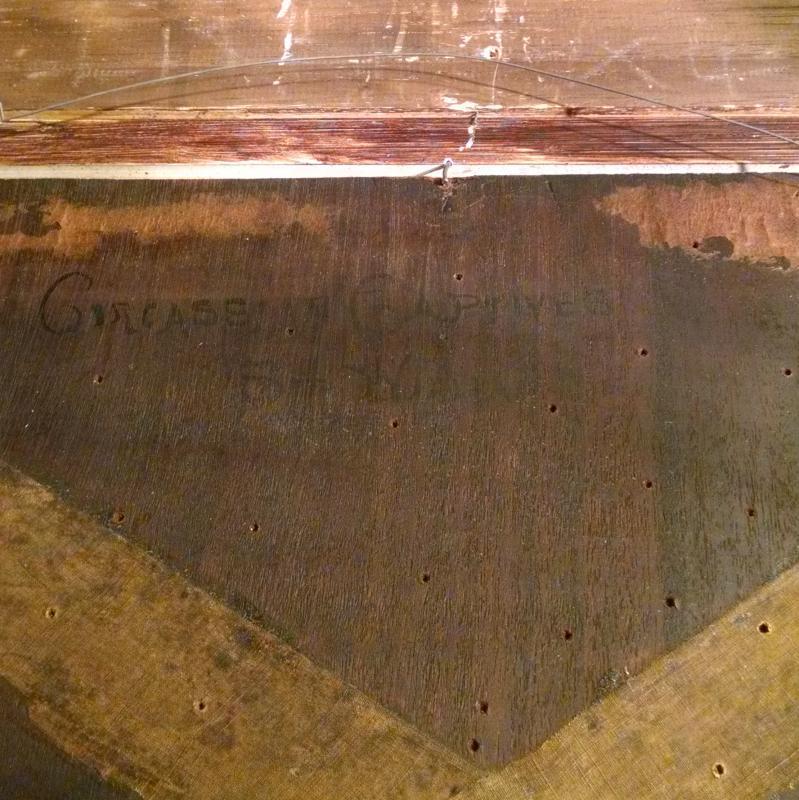 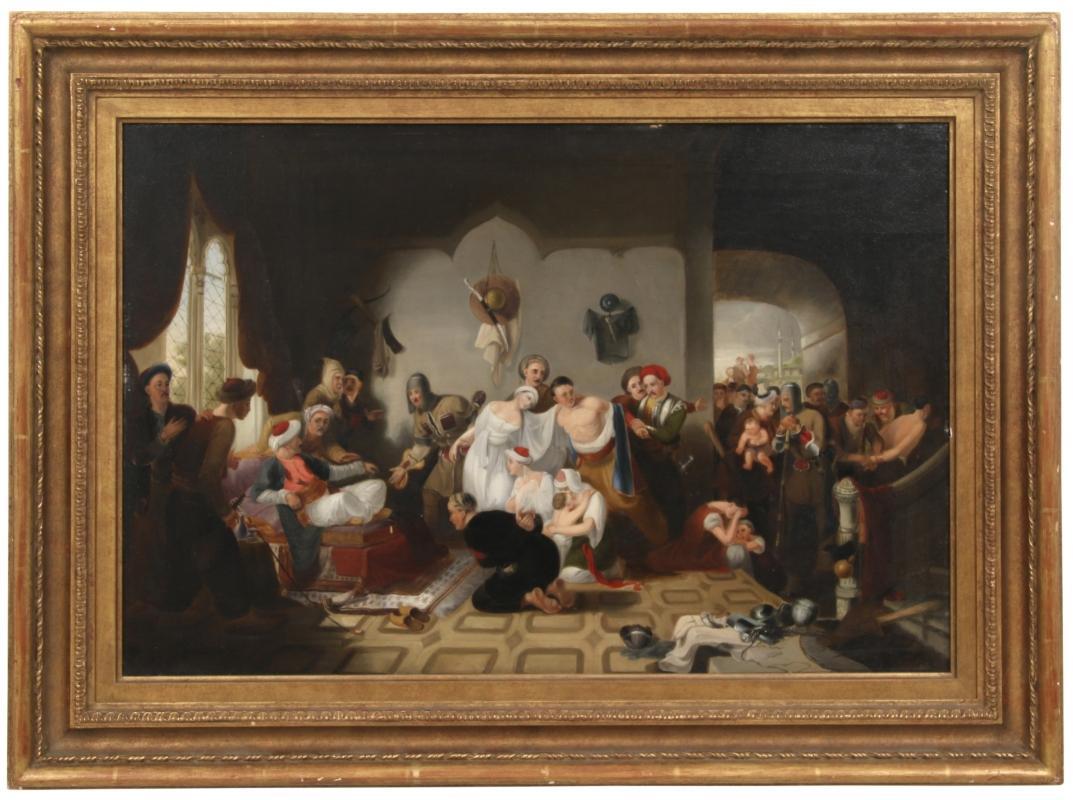 This oil on wooden board after the accomplished British painter, Sir William Allan, R.A., R.S.A (1782-1850), entitled Circassian Captives,  depicts a Circassian tribal chief selling to the Turkish Sultan or a Pasha, captives of a neighboring tribe taken in war.   The exposed portion of the board measures 16 by 23.75 inches (41 x 61 cm) and the period giltwoof frame measures 22.25 by 30 in.  Titled on verso..  Condition is good.  There are a few small areas of pain loss, noticeable along the upper right edge of the board.  We have not examined the work under black light and there may be areas of restoration including inpainting.

According to Christie's (see description of lot 82, a painting by Allan with estimate of 30,000-50,000 GBP, in their sale in London on June 7, 2007) the original painting was exhibited to great acclaim in 1815 in Edinburgh.  A reproduction on paper by the Scottish engraver, James Stewart, resides in the collection of the National Galleries of Scotland.

The Circassians are a muslim ethnic group from northwest Circassia.  Most were displaced to Persia, the Ottoman Empire and elsewhere after many decades of war with the Russians and culminating in the Russo-Circassian War of 1864.

Allan was a distinguished Scottish historical painter.  A member of the Royal Academy, he also served as President of the Royal Scottish Academy.  He travelled widely, to France, Germany, Russian, Spain, Morocco and elsewhere, and is known for his painted genre scenes of historic moments and battles.  Notably, in 1843 The Duke of Wellington is said to have purchased his painting entitled Battle of Waterloo from the English Side.  In 1841 he became the limner (portraitist) to the queen in Scotland and was knighted in 1842.

Allan's works have periodically appeared at major auction.  A most notable sale occurred at Sotheby's in London on September 5, 2001, in their sale of Scottish and Sporting Pictures, where his portrait of Mary Queen of Scots was offered in lot 1,333 with an estimate of 50,000-80,000 GBP and sold for 108,000 GBP.