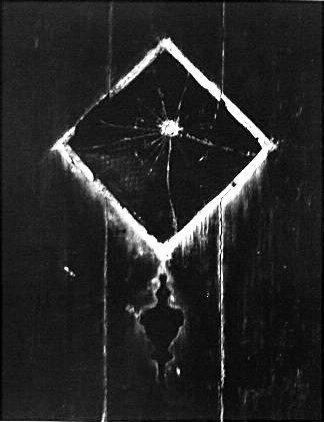 Signed and blind stamped recto. Stamped verso: "PRINT 2/3 OF 6 GOLD / CHLORIDE PRINT / POLYFIBER." A wonderful exmple of this master printer's work, this photo appears on the cover of Gagliani's 1975 monograph. (NOTE: the digital image reproduced here does not begin to represent the richness of this print. Gagliani was a master printer, and his photographs must be seen to be fully appreciated.) Oliver Gagliani (1917-2002) was a founding member of the Visual Dialogue Foundation in the Bay Area in the mid-1970s and has been a well-respected teacher to many photography students. Oliver Gagliani has been described recently as one of the master photographers in the West Coast tradition of Adams, Weston and Bullock. Such an accolade merely pays tribute to his accomplishments as a photographer, but does not begin to identify the man or his work. Although Gagliani is a contemporary photographer, his work does not reflect any of the conceptual and formalistic concerns often seen in the cartoon like imagery on the walls of galleries and museums. Nor do we find in his work the bold adoration for nature's most stunning creations that has become a hallmark of the school of photography with which he is associated. Gagliani is a unique individual whose perceptions of things of special meaning to him are reflected in his pictures. He expresses a profound reverence for the world he photographs, relates to the life in all things and respects the integrity of even the most humble object. Through a rare gift, he is able to explore the essential nature of the subject, using its reflected light to capture on film and printing paper the illuminated spirit and wisdom contained within. To the photographers in whose tradition he is said to follow, he is "Thoughtful and lyrical," "personally perceptive," "a master technician with a sensitive eye," a viewer of "all nature through a gentle, loving lens," and a creator of photographs that "are a clear expression of delight." And for the student of photography, Oliver Gagliani is a compelling force who lights the way toward putting technique at the service of a personal expression of spiritual awareness. Each and every summer he shares both his enthusiasm for and knowledge of his craft with the students and followers who flock to his Virginia City, Nevada, workshops." (From: OLIVER GAGLIANI: THE INTERNAL IMAGE, by David Brooks 'Peterson's PhotoGraphic Magazine Vol. 8, No. 7; November 1979) Ansel Adams said of his friend Gagliani:" (his) photography is both thoughtful and lyrical and personally perceptive.... His work is a most refreshing reminder of the inherent beauty of the world and the continuing miracle of creative vision." Keywords: architecture; abstraction