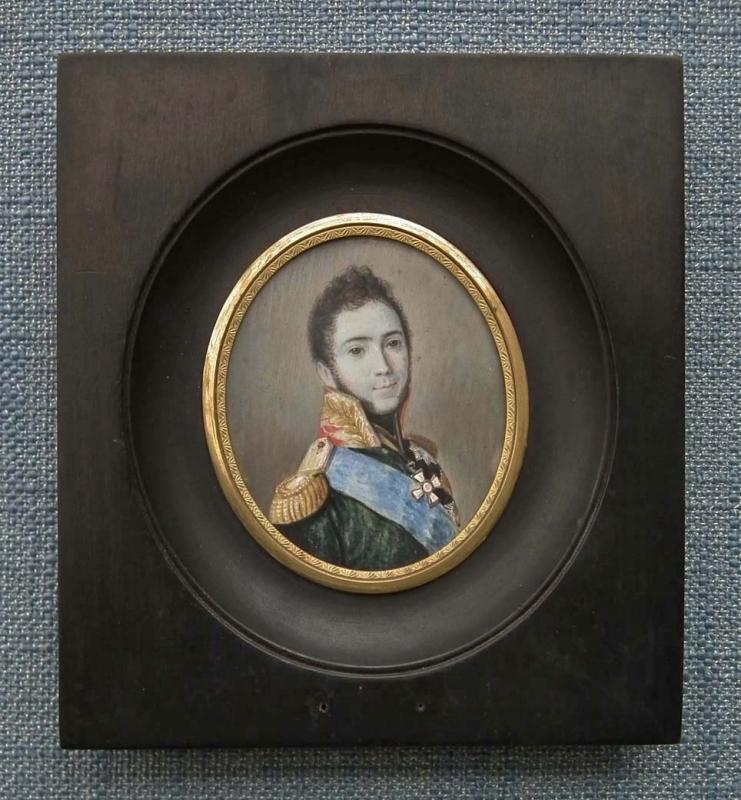 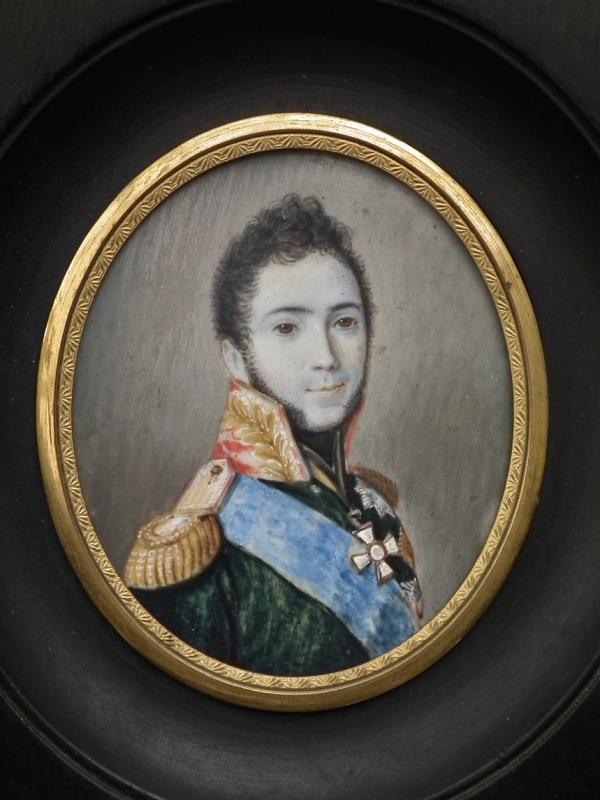 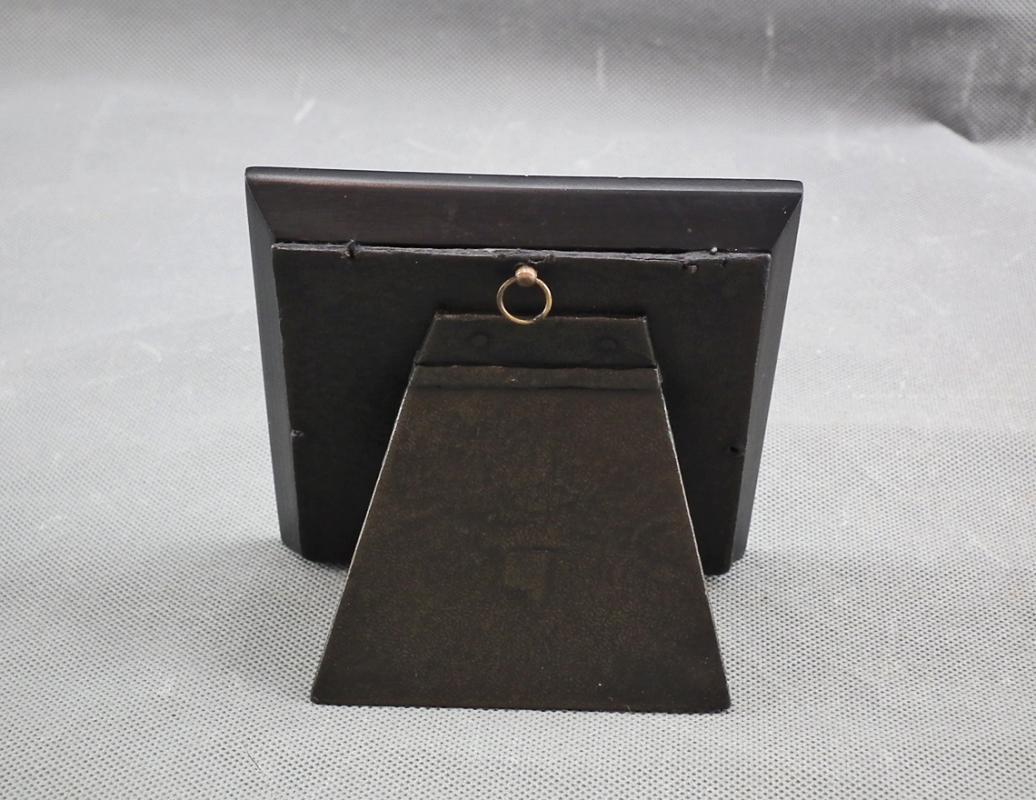 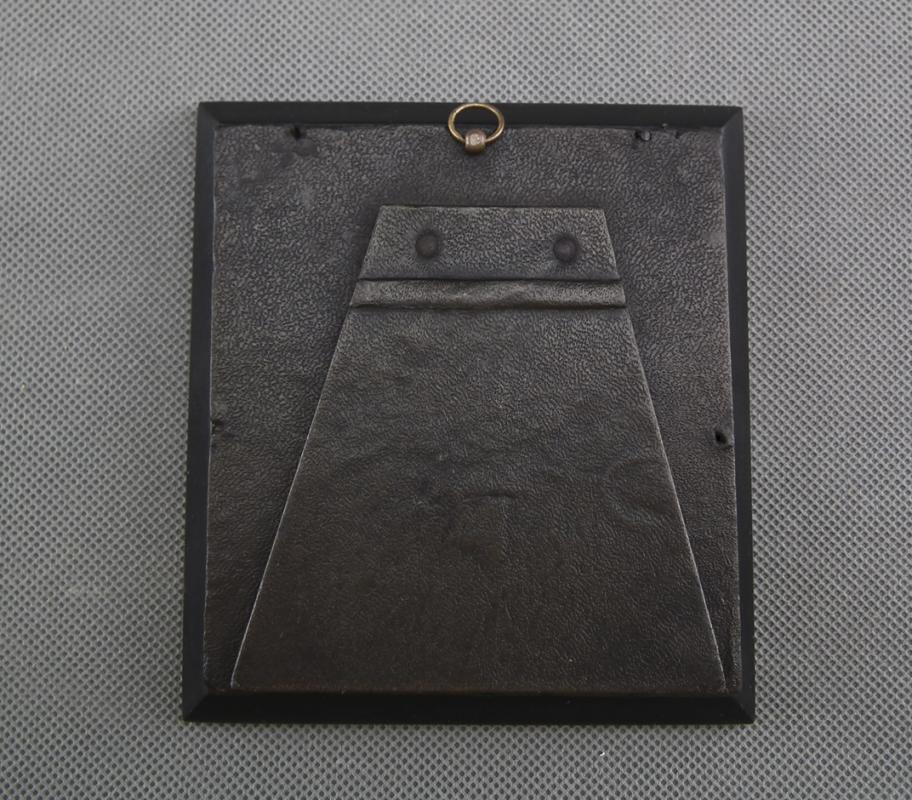 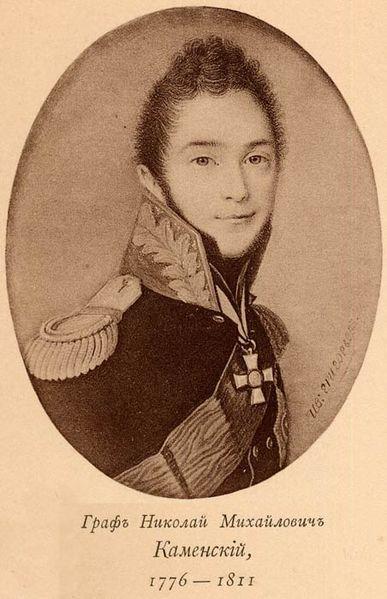 Antique, early 19th century, of superb quality, finely hand-painted Russian miniature portrait of Count Nikolay Mikhailovich Kamensky (1776-1811), attributed to the Russian painter Ivan Gavrilovitch Grigoriev (born 1780– died in the 1st half of the 19th century). Watercolor and gouache on a natural wafer.
The count is depicted in a general green uniform with a red collar, embroidered with gold oak leaves, gold epaulets, a black stock, wearing a blue moiré sash of the Imperial Russian Order of St. Andrew across his chest, the order St. George (2nd Class) suspended from his neck, the Star of the Order of St Alexander Nevsky on his chest, and two other orders.

The oval miniature is mounted in an oval inner frame of gilded bronze with flat glass housed in a rectangular ebony wood frame, backed by lacquered cardboard fitted with an easel to stand and a suspension ring to hang on the wall.

This miniature portrait is similar to the miniature portrait of Nikolay Mikhailovich Kamensky from the collection of Grand Duke Nikolai Mikhailovich (1859–1919), a collection of Galina Vishnevskaya and Mstislav Rostropovich. Exhibitions: Historical Exhibition of Art Objects, St. Petersburg 1904, p. 8, No. 68.
Literature: "Russian portraits of the 18th and 19th centuries" by Komelova G.N., Printseva G.A.
"Unknown miniaturist of the first third of the 19th century" by Ivan Grigoriev, p. 262-263.

Please see the last picture in the listing.

Russian miniature portraits attributed to Ivan Gavrilovitch Grigoriev are rare, and to this day, not many have survived.

We searched reference books, museum catalogs, and the internet for other miniature portraits attributed to Ivan Gavrilovitch Grigoriev and found only the following 3 miniatures.

CONDITION: This original painting is in very good condition and has no restorations or repairs.

Russian General of the Napoleonic Wars Count Nikolay Mikhailovich Kamensky (1776-1811) was born to a prominent Russian family; General Nikolay Mikhailovich Kamensky son of Field Marshal Mikhail Kamenski and brother of Sergei Kamenski. He studied at the Cadets School. In 1787, he was appointed Aide-de-camp to his father. Emperor Paul, I promoted him to Major General in 1799, the year when Kamensky chose to join Suvorv during the Swiss campaign against Napoleon.

By the time the Finish War the most brilliant campaign of his career, he was promoted to Full General in 1809 and achieved important successes against the Swedes at Kourtane and Oravais. It was he who came up with a daring plan of the Russian infantry crossing the frozen Gulf of Bothnia from Finland towards Umea and Aland, which forced Sweden to cede Finland to the Emperor Alexander I of Russia.

When the war in the north was over, Kamensky succeeded Bagration in charge of the Danube Army, which operated against the Turks in the Russo-Turkish War (1806-1812). Accompanied by his elder brother Sergei, Nikolay Kamensky stormed Silistra and Pazardzhik. They together defeated a Turkish force of 40,000 at the Battle of Batin on 9 September 1810.

On 4 February 1811, Kamensky caught fever and was transported to Odessa for convalescence. He died three months later, on 4 May 1811 at the age of 34.