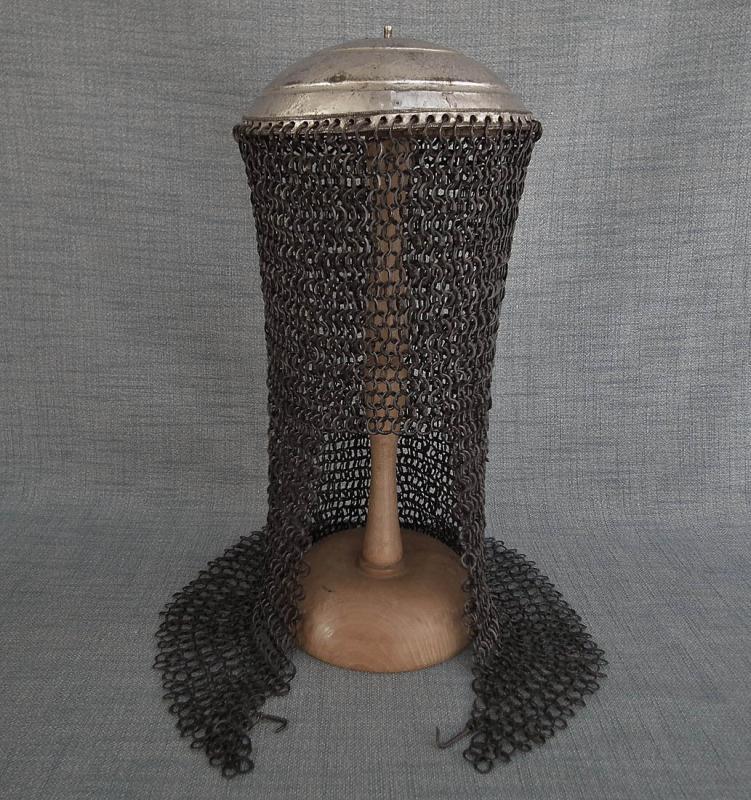 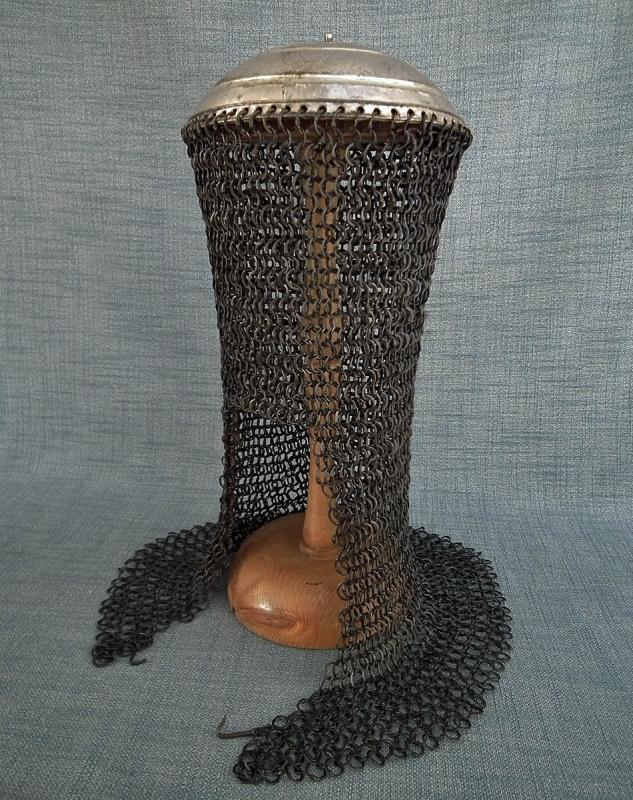 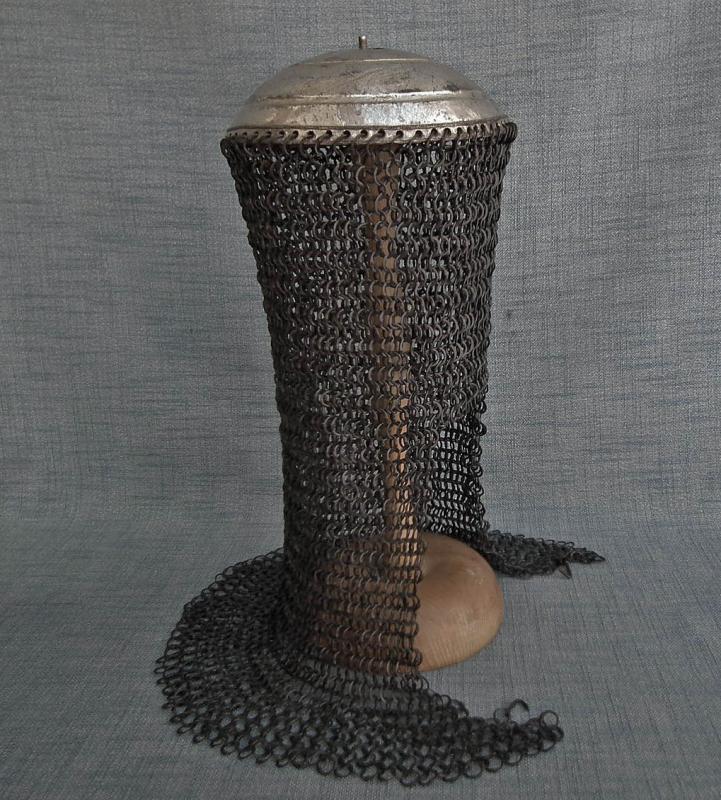 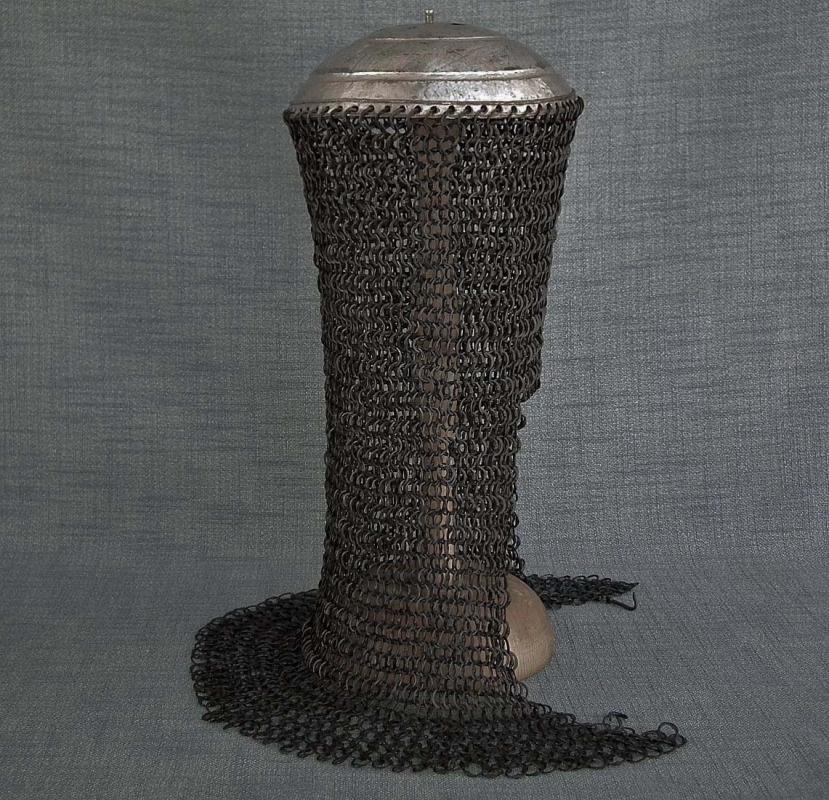 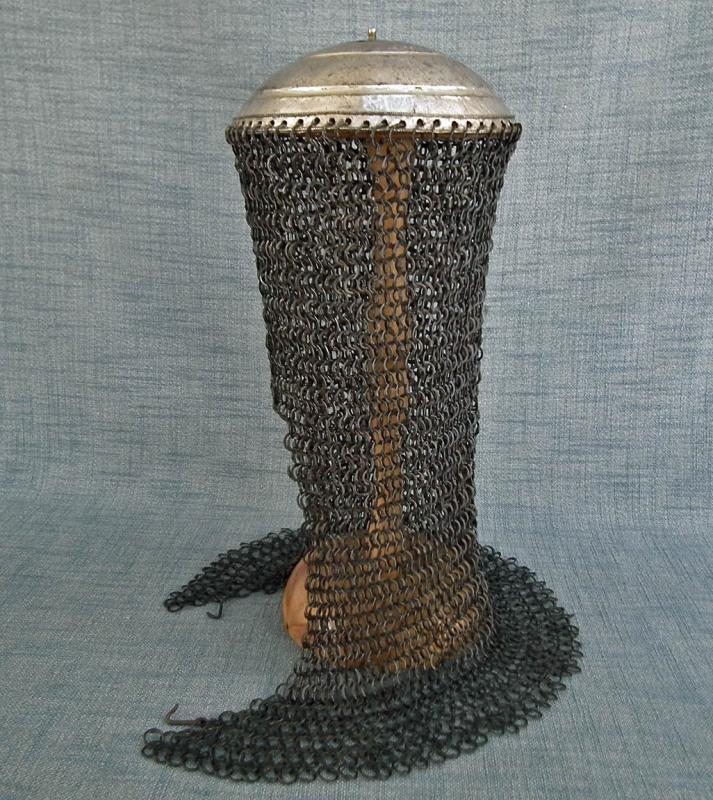 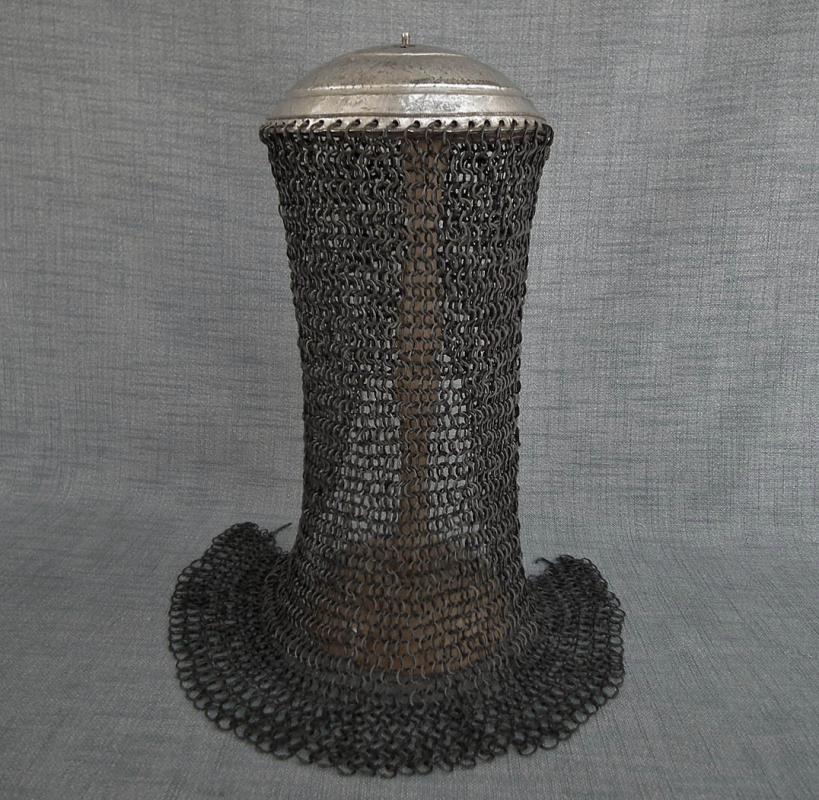 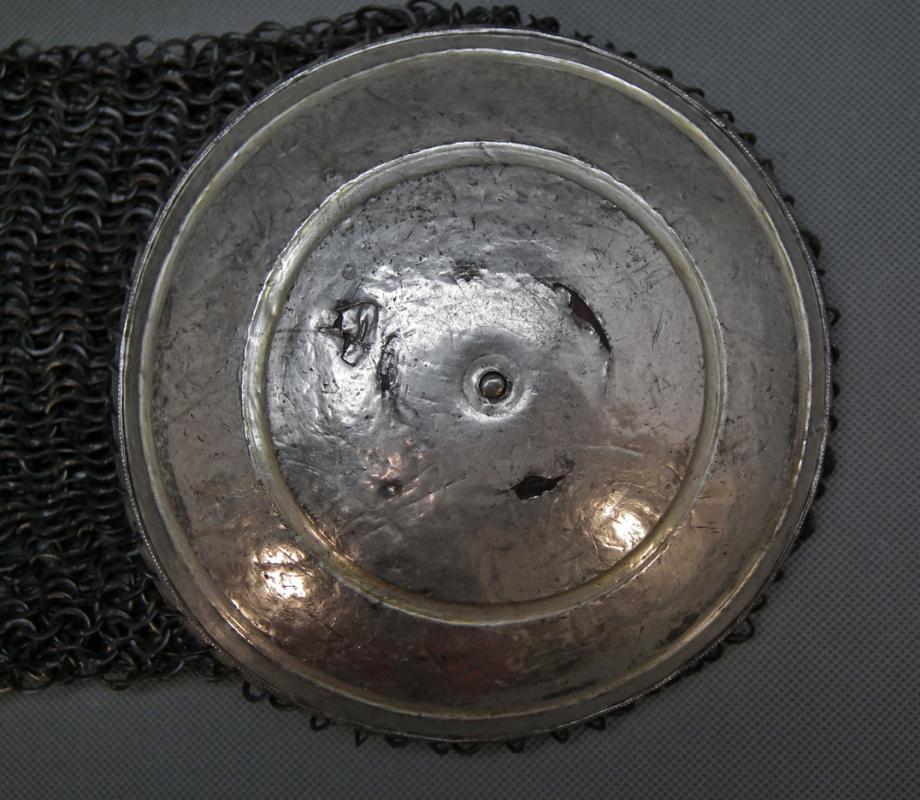 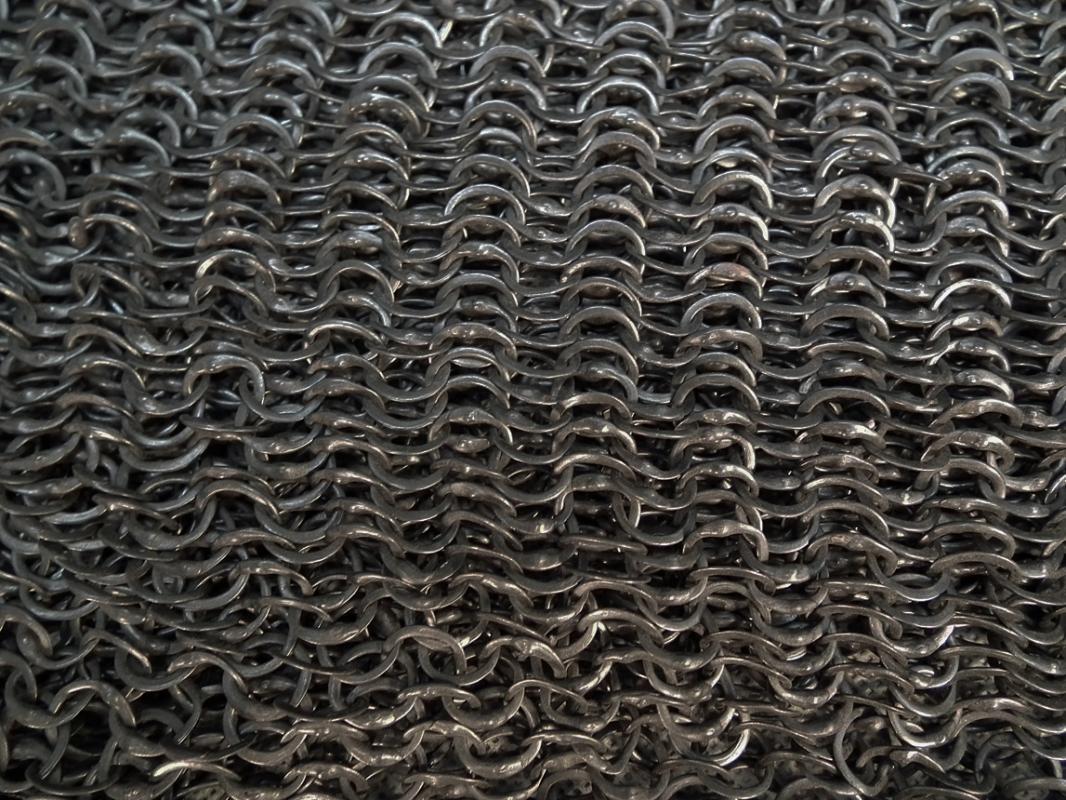 This helmet in the form of the Turkish Ottoman Sipahi (سپاهی‎)‎ cavalry helmets with a plain shallow domed skull is formed of three plates; a central steel plate covered on the top with a worn sheet of gilt silver with slightly visible remains of the gold gilding, adorned with two impressed shallow concaves rings.
The lower edge is decorated with two narrow decorative rings with a bead pattern.
Affixed on the top the tubular pommel to which a ring for hanging the tassels was once attached (missing ring).

The helmet's interior is lined with a thin hand-forged sheet of the blackened iron.

Chainmail camail of superb quality with a blackened finish suspended from the rim comprises hundreds of extremely well hand-forged flattened iron rings; each ring is hand-hammered and riveted at the join.
Both lower ends of the chainmail have two small hooks for closure.

The Crimean Tatar arms and armor of the 17th century are considered the rarest of all Islamic weapons and armor. They rarely appear in museum collections or for sale, and they are almost impossible to get.

We have not seen such excellent quality "Misiurka" for sale in our history of selling antique arms and armor, neither in private collections nor in museums.
This particular helmet was custom made for an important person of Crimean Muslim aristocracy, possibly a member of the ruling society, perhaps a Crimean Tatar cavalry's chief commander. This statement is based on more than 50 years of my trading experience with Muslim Arms and Armor.

1.A very similar (almost identical) helmet made of the steel plate with the top also covered with the sheet of gilt silver and decorated with two impressed shallow concaves rings that look almost the same as our helmet is published in the book "Tartar Arms and Armour - Bron i Uzbrojenie Tatarow" by Jacek Gutowski, Warszawa 1997. Page. 7.Figur.34. Description: Tatar "Misiurka" 17th century.

2.Another related Crimean Tatar helmet but not as fine as our is published in the book "Die Türckische Cammer," by Holger Schuckelt. Page: 115-116. No.84. This helmet was a gift from the Holy Roman Emperor, King of Hungary, and Croatia Rudolf II to the Elector Christian II of Saxony in the 1602 A.D.

If this helmet was presented as an imperial gift by the most powerful Christian ruler, the Holy Roman Emperor, Rudolf II, to the Prince Elector Christian II of Saxony, it clearly indicates that the value of this helmet in 1602 must have been significantly high.

A few examples of similar in the style helmets, however not Crimean Tatar but Turkish Ottoman, can be seen in Austrian and German museums, mostly captured from the Turkish Ottoman army as war booty in Vienna's battle 1683.A.D.

Most of these types of Turkish Ottoman helmets are made with a plane steel top and not so fine -quality, chainmail camail, some are of better quality with gold inlaid adornment. However, this type of helmet covered with a silver sheet is distinctive for Crimean Tatar helmets, which can also be seen on the 18th century Crimean Tatar helmets of later conical forms.

A similar helmet, not Tatar but Turkish Ottoman, not as good quality as ours with a plain steel top is published in Sotheby’s catalog, Art of the Islamic World - Sotheby’s London, 07, October 2009, (lot 166), at £3000-4000, and was sold for £3,750. (7,145 USD.) This price was from 9 years ago when Islamic antiques were cheaper than they are today.
The buyer will be provided with a copy of the pages from the mentioned references, together with a certificate of authenticity.

PROVENANCE: Acquired from an old Canadian Collection of Islamic Art, including Muslim arms and armor.

CONDITION: Showing age and usage, free of corrosion or rust, the blackened iron chain mail camail in very good condition, silver sheet worn in some spots, crack on the edge of the skull with old repair.
However, in good condition for the combat helmet to be over 350 years old.