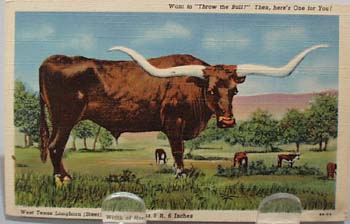 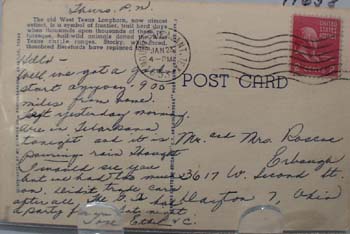 Longhorn Steer West Texas Post Card This is a nice color post card, with white border, of the animal, the West Texas Steer. Width at horns 9'6"" It reads on the front of the card, want to throw the Bull? Then heres one for you. On the back it reads, The old West Texas Longhorn, now almost extinct, is a symbol of frontier, trail herd days when thousands upon thousands of them picturesque, half-wild animals dotted the West Texas cattle ranges. Stocky, white-faced thorobred Herefords have replaced them. Distributed by Mc Cormick Co., photographers, Amarillo, Texas. Genuine Curteich-Chicago C T Art-Colortone Post Card. Used. In excellent condition. Does show some aging. 44 cents shipping if in USA 3 1/2"" by 5 1/2""