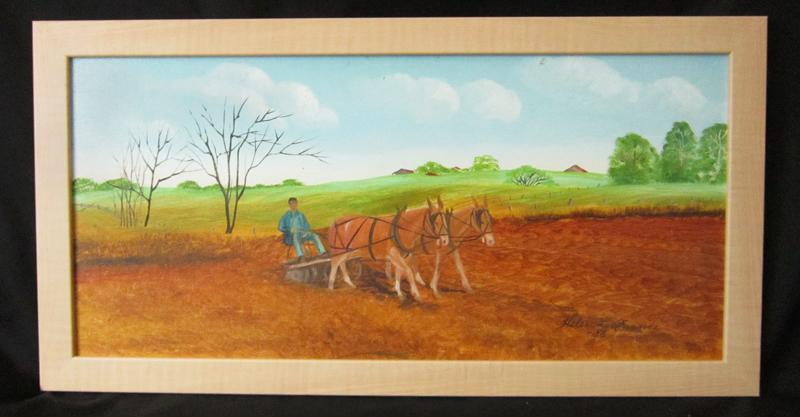 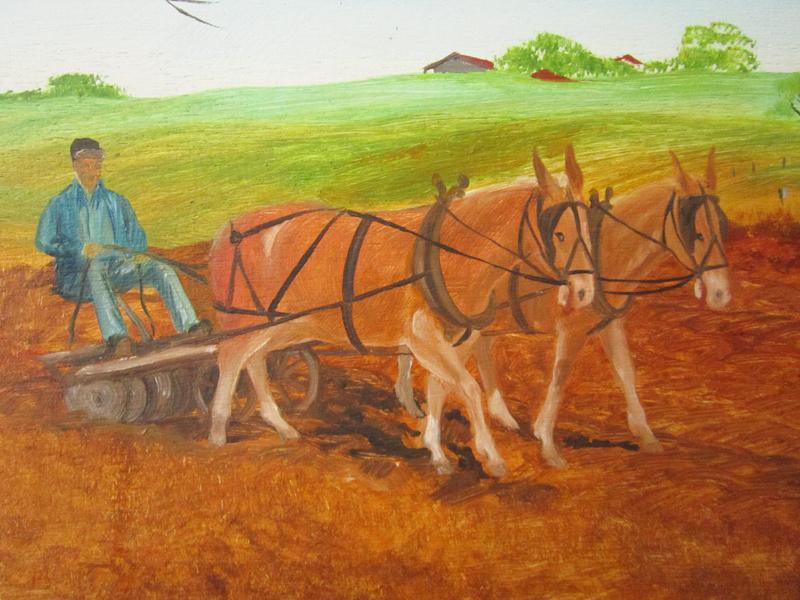 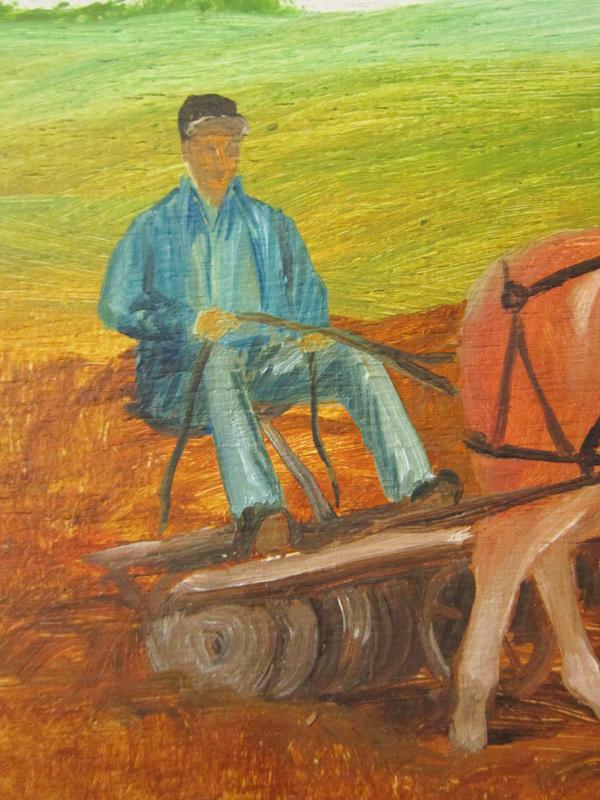 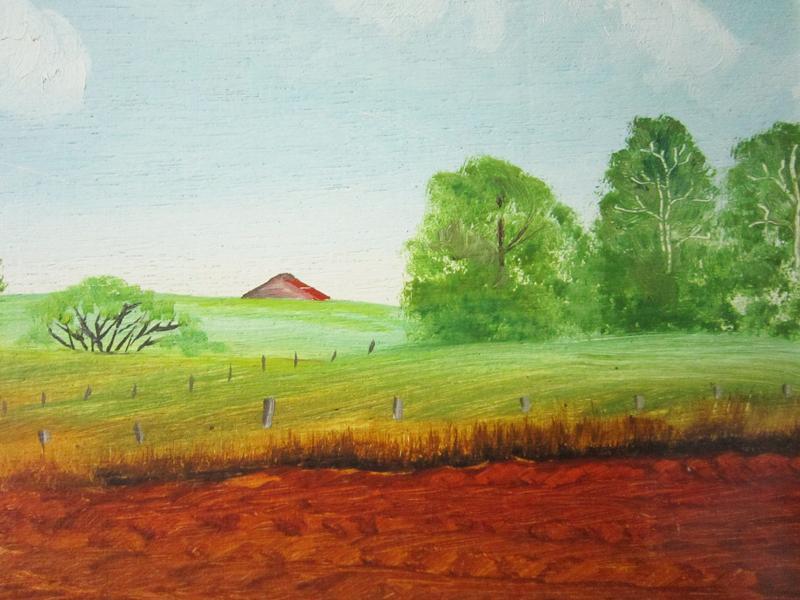 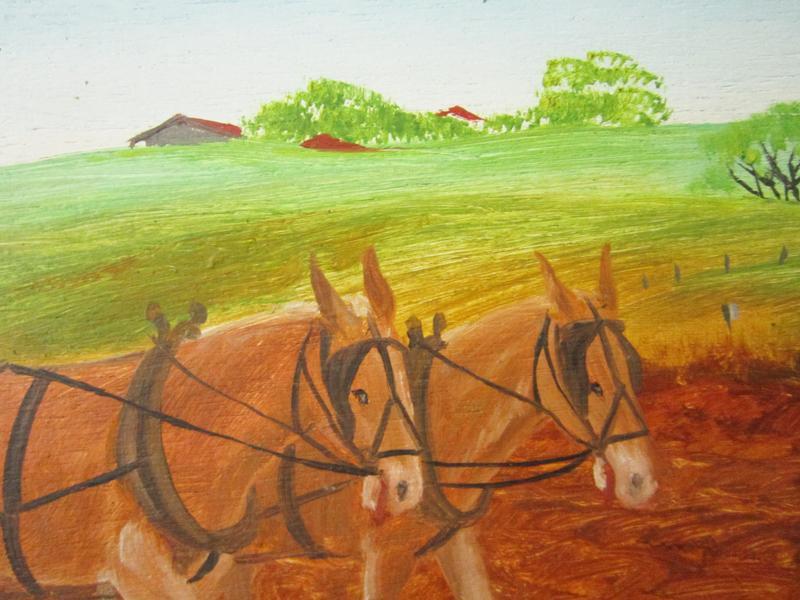 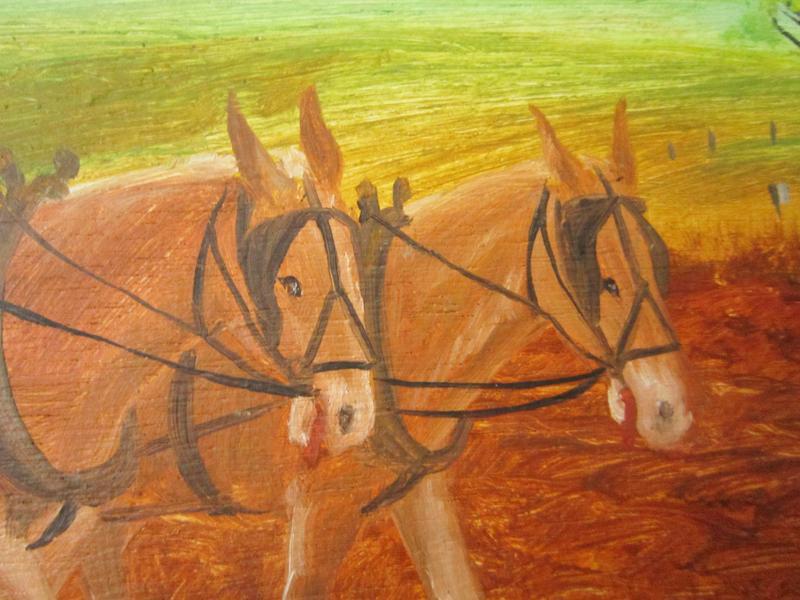 This early Helen LaFrance depiction of a farmer plowing a field is oil on board and signed lower right by the artist and dated 1986. Dimensions are 13 inches high x 25 inches wide, framed.  LaFrance is often described as both an outsider artist due to her lack of formal training and existence outside the cultural mainstream and as a folk artist best known for her memory painting of the disappearing lifestyle of the rural South.

LaFrance, born in 1919, grew up in Western  Kentucky under Jim Crow laws, which between 1876 and 1965 prescribed segregation and disadvantaged social, economic and educational conditions for African Americans in the United States. Her father owned and farmed his land, growing tobacco, corn, black-eyed peas, beans, peanuts and sorghum, in a time when share-cropping was customary. Her parents bought school books to teach her at home and, after her chores were completed, she drew and carved in her spare time. Her artistic bent was encouraged from childhood and she always followed her mother's wisdom to "paint what you know." She went to school in fifth grade, but later left to work on the farm. When her mother died, she left home to take various jobs in a hospital, caring for children, cooking, working in the tobacco barns and a ceramic factory where she decorated brand-name whiskey bottles. In her 40s, she made enough money to buy art supplies at the grocery store and in 1986 she began painting full-time.

This painting suggests a sense of time and place that resonates with the emotions and memories of the viewer. In this case, using oil on board, LaFrance shares the traditions of farming and the values she grew up with. She witnessed the Depression, the stock market crash, the war in Vietnam, and the passing of the Civil Rights Act of 1964 and the Voting Rights Act of 1965. It is that blend of personal experiences and expressive artistry that makes Helen LaFrance a unique and an important American artist.

LaFrance's work is represented in many notable public and private collections in this country and in Europe, including contmeporary artist Red Grooms, Gayle King, and Bryant Gumbel. Her work has been shown at county fairs, at the Mayfield, Kentucky bank and public library, Murray State University, the Kentucky Museum(Bowling Green), the National Black Fine Arts Show (New York City), and Color, an art show sponsored by Oprah Winfrey in Chicago. Her depiction of workers rolling cut tobacco is included in the Van Nelle collection of tobacco art in Amsterdam, Holland, purchased on a visit to the Kentucky tobacco barn where she worked. The Owensboro Museum of Fine Art holds examples of her work in its collection and featured her in a cataloged show in 1991 called "Kentucky Spirit, the Naive Tradition." The Kentucky Folk Art Center in Morehead also owns her work and has included her in its exhibitions. The subject of a Kentucky Educational Television (KET) program and other documentaries, she received the prestigious Folk Heritage Award for 2011, one of the Governor's Awards in the Arts presented by the Kentucky Arts Council. She is featured in a chapter of Kathy Moses' reference book, Outsider Art of the South and is the subject of another book, Helen LaFrance Folk Art Memories by Kathy Moses, with Bruce Shelton. Her life and her work were documented in the award-winning screenplay by Marilyn Jaye Lewis, Tell My Bones: The Helen LaFrance Story.

Helen LaFrance celebrated her 100th birthday in November 2019. She resides in a Kentucky nursing home and says of her days, "When I'm not eating or sleeping, I'm painting."