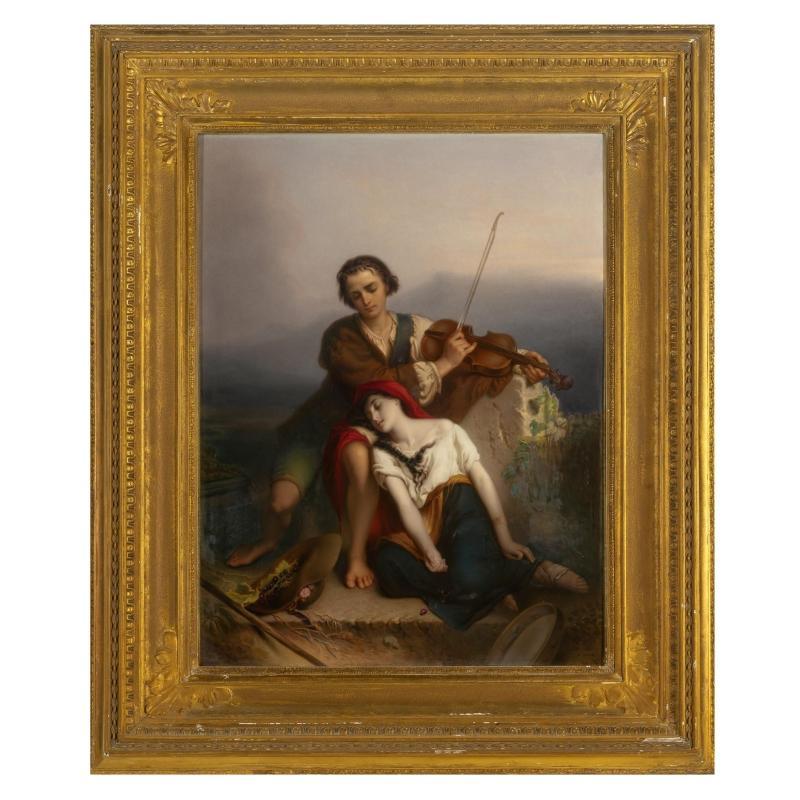 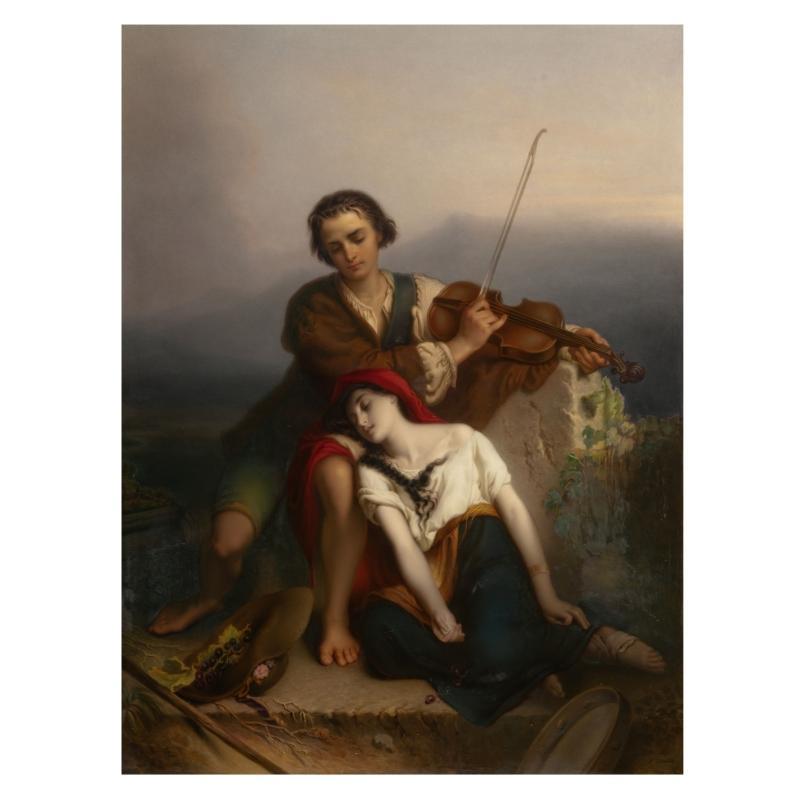 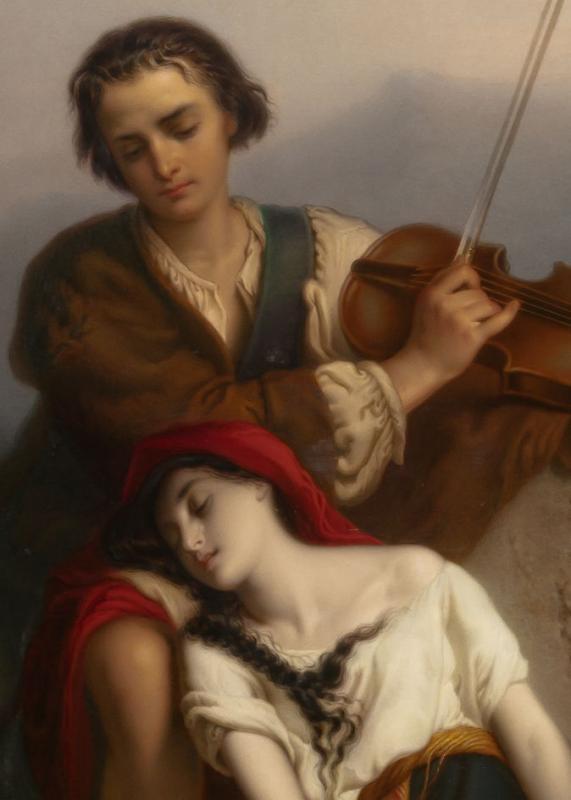 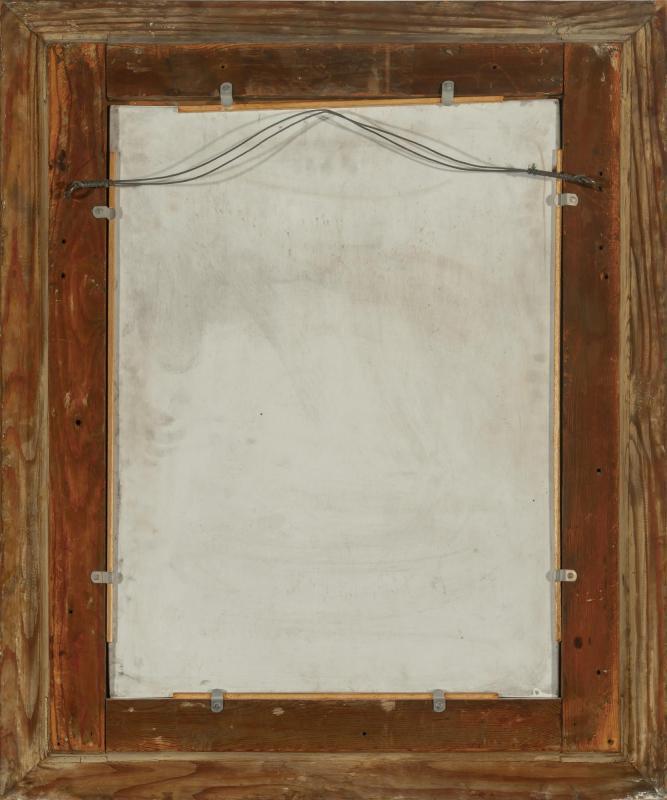 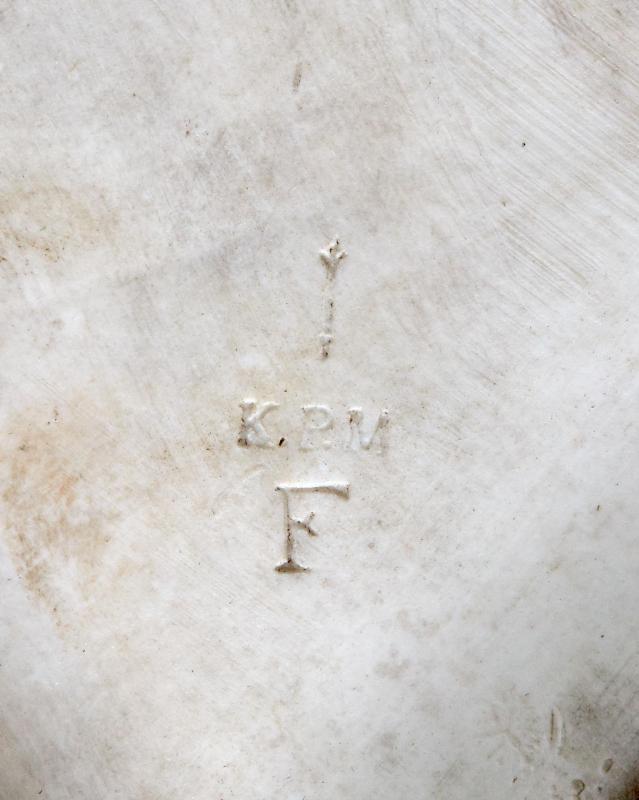 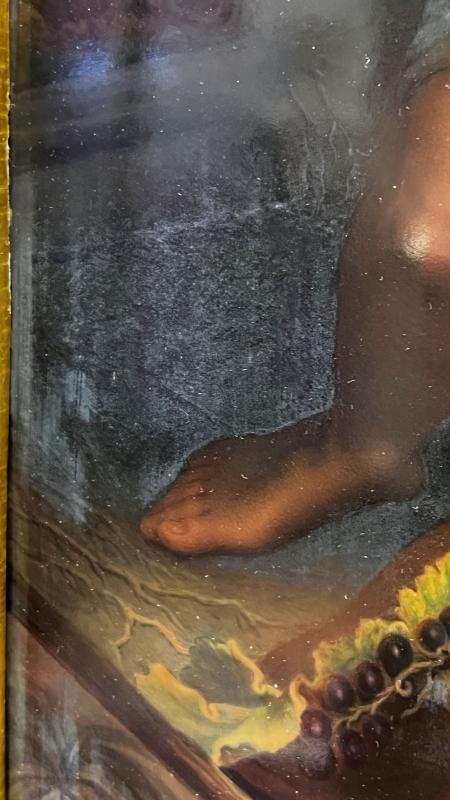 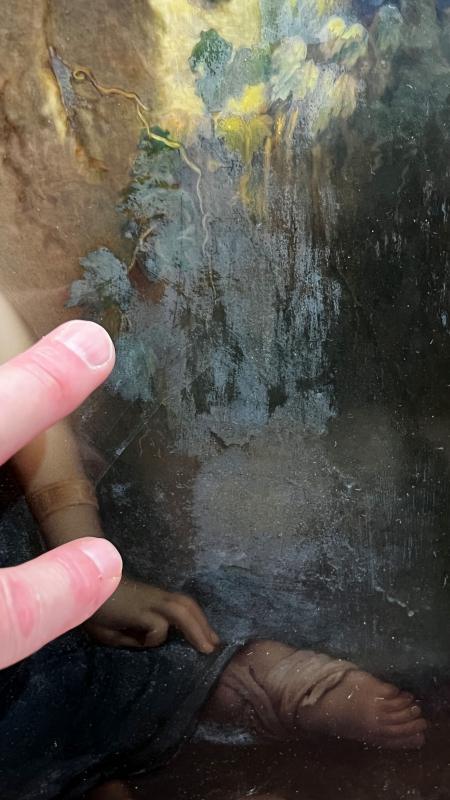 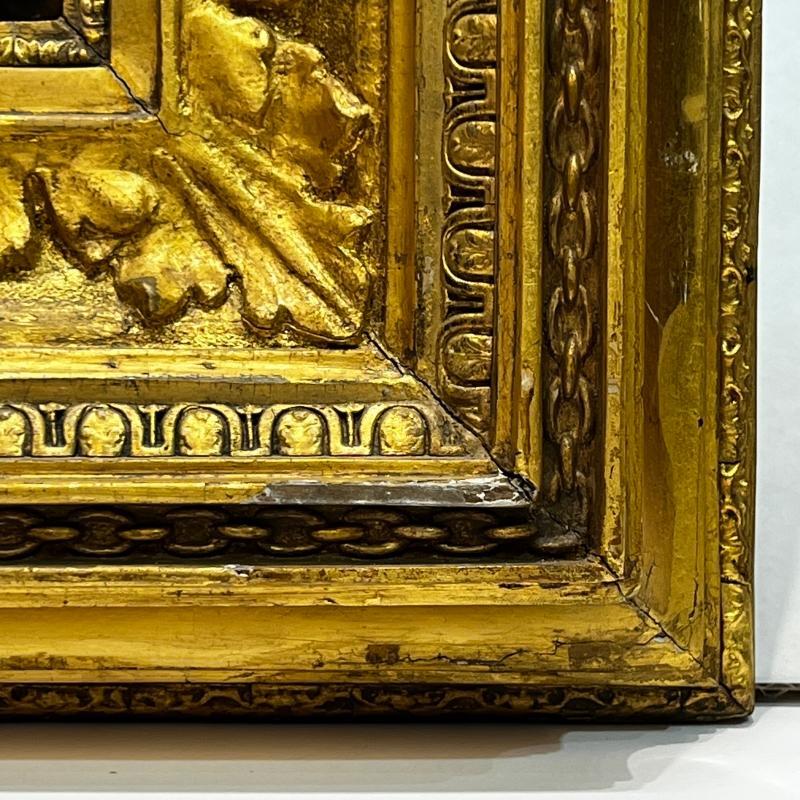 Our very large plaque, 20 by 26.5 inches (51 by 67 cm), is known as the Fiddler and Gypsy Woman, and Consolation, after the painting by Louis Gallait (Belgian, 1810-1887) that resides in the collection of the National Museum in Warsaw.  Wonderfully painted by F. Schmidt with signature in lower right corner.  It resides in a period giltwood frame measuring 30 by 35.75 inches.  Impressed KPM, scepter and capital F on verso.

Literature:  KPM Plaques: Gaining an Insight into the Art of Painting on Porcelain, Sean Shakrovski and Vera Rininberg, p. 117, fig 38.

Plaque is in good condition. There are no breaks or visible cracks or chips. There are a handful of small scratches of paint loss. Apparently layered with diluted gesso or other cloudy white substance to silhouette and obscure most of the male figure's clothing and other areas including the violin. This film mostly cleaned away when distilled water and soft cotton pads were wiped over the area, but some areas remain, including on and around the boulder on the right side and apparently to the left of the man's right foot. These remaining cloudy areas may likely be removed with further gentle cleaning. It's possible the cloudiness is residue from unfortunate use of a household spray cleaner such as those containing wax designed for furniture. Period giltwood and gesso frame is also in good condition. There are numerous but small gesso losses and a few small areas of restoration.

According to Iwona Danielewicz of the National Museum of Warsaw, the original was first painted in 1851 and is one a few painted by the artist.  This date is given by Lucien Solvay ("Notice sur Louis Gallait", Bruxelles 1919, p. 24), suggesting that the original was in the Louis-Frédéric-Jacques-Ravené collection in Berlin. The artist was able to sell it during his visit to Germany and the Czech Republic in 1852. The  Walters Art Gallery in Baltimore includes one version of this composition and the painter's letter of June 20, 1860, addressed to William Walters, in which he explained the subject of the work. The siblings are resting on the slab of the old grave, the brother plays the violin, the sister, resting her head on his knee, listens to the intoxicating thanks. On the other hand, Serge le Bailly de Tilleghem interprets this picture as a moving scene in which a young, poorly dressed violinist, while playing, tries to soothe his wife's grief or longing. The multiplicity of the author's repetitions of this composition indicates its popularity in the mid-nineteenth century. Gallait, a representative of the mature form of romanticism, in his version juste milieu, was able to perfectly combine a moving story full of sentimentalism with an excellent painting technique. Skillful enhancement of impressions, awakening various feelings in the recipient are the dominant features of his work. Two oil sketches and two pencil drawings have survived, constituting a preparatory study for the entire series of these paintings.