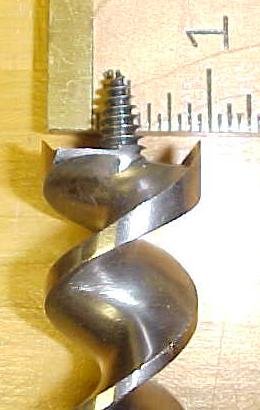 This is a new old stock dowel auger bit marked "JAMES SWAN CO. SEYMOUR CT. U.S.A." on the shank. This is a Russell Jennings pattern auger bit. Swan was one of several companies that manufactured the R. Jennings patented auger bits in their own factory. In most cases the lead screw on the auger bits marked and made by Russell Jennings have a slightly finer lead screw thread on them. This one is very close to identical to the Jennings, about one thread lead in the full length of the screw. So what is a dowel auger bit? It's mainly the same in every feature, except it is shorter (5.5" long overall) than the standard, allowing the user to maintain better controll of the auger bit while drilling, since dowel holes are generally expected to be square to the work suface, this short bit helps the user keep the bit and brace square much more easily. The auger bit measures .94" diameter, and is marked 15 on the tapered square end shank. In fine, new old stock condition!