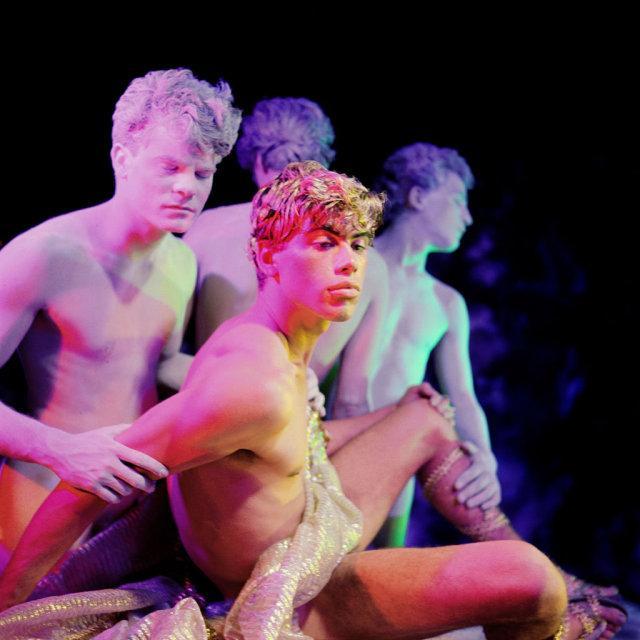 Signed, titled, dated and editioned 6/25 in ink, verso by the photographer. The model is Bobby Kendall.

JAMES BIDGOOD (b.1933) came to New York City to study fashion at Parson's School of Design, and later worked as a window decorator and dress maker. A completely self-taught photographer and filmmaker, he started photographing in 1962-63 when he met Jay Garvin in a drag club.

Bidgood himself created all the props, backgrounds and costumes in his photographs, which were all shot in his apartment. At first, the only outlet for his work was in physique magazines, where contemporary gay male images were of the idealized masculine form such as Tom of Finland or Bruce of LA. It was Bidgood who first introduced the notion of male beauty, the masculine form in a feminized environment. His style encompassed painterly, fine art composition and lush staging, absent from other male imagery of the day.

Bidgood was also a self-taught film maker. He worked on his Pink Narcissus for five years. When he received completion funding from Sherpix Production Company, they took the film away from him during post production. Bidgood protested and had his name taken off the film. Consequently, Pink Narcissus was released in 1971 as a film by "anonymous". He reclaimed it 1996-7. But is was not until the Taschen book was published in 1999 that his name became associated with the film.

Photographers Pierre et Gilles saw Pink Narcissus in 1975-76, and now acknowledge his strong influence on their work, as does artist David LaChapelle. It is interesting to note that in Pink Narcissus Bobby Kendall plays multiple roles. While not a direct influence, this predates the style later popularized by Cindy Sherman in her Film Stills series where she modeled for every actor depicted.