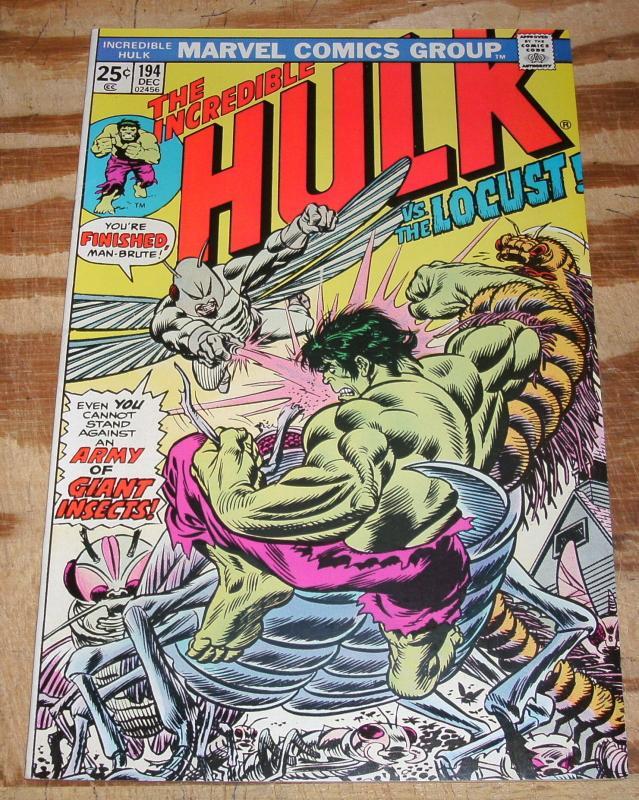 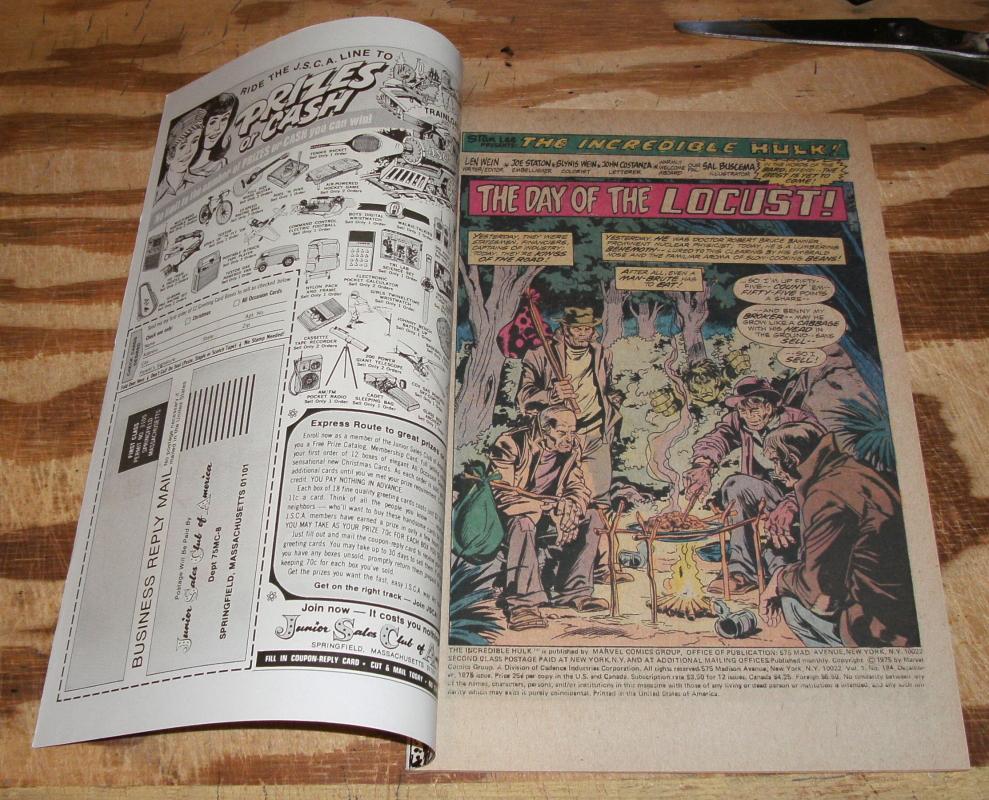 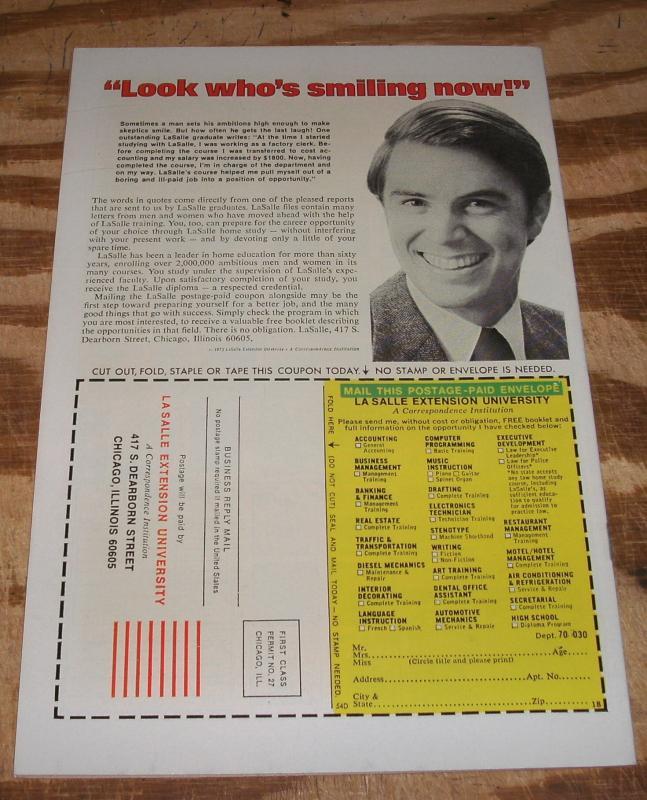 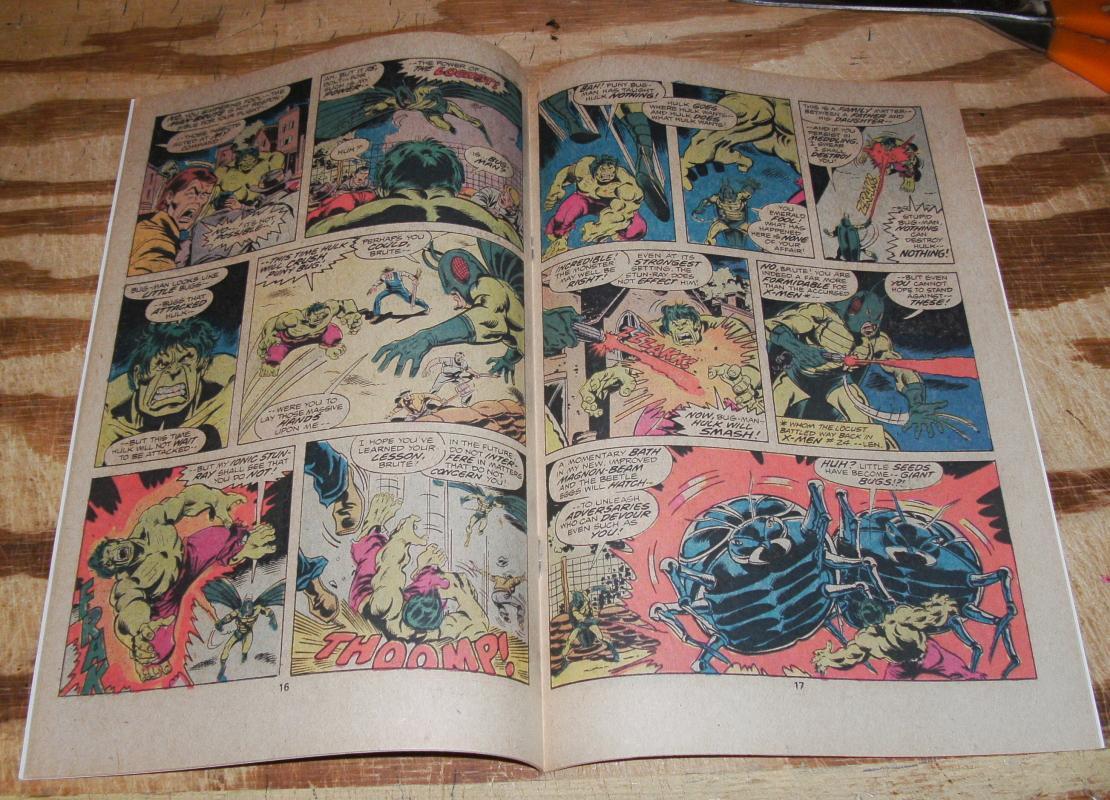 Day Of The LOCUST!

The Hulk has been wandering in the wilderness following his escape from Doc Samson in New York City. Attracted by the smell of cooking food, he comes across a group of hobos reminiscing on the days when they were rich and affluent. When they detect the Hulk's presence they attempt to attack him but the Hulk scares them off. Inspecting their food, he finds that they were cooking up his favorite food: beans. He chows down on the beans and then falls asleep, reverting back into Bruce Banner. Banner wakes up the next morning wondering where he is and goes out to hitch hike on the streets. There he is picked up by Bob Hickman and his wife Carol. Despite their warnings that riding with them would be trouble, Bruce hops in anyway. They soon come to a town that is barricaded off. Allowed access into the town, Carol explains to the confused Banner that this is all their fault.

While back in New Mexico, Doc Samson returns to based following his failure to capture the Hulk where Clay Quartermain mocks him for being unprofessional in his attempt to capture the brute. As Samson loses his temper, a soldier one the site of the repairs on Hulkbuster Base tells Ross, Samson and Quartermain that there is something that they have to see.

Back in the midwest, the Hickmans explain to Bruce that they married without Carol's permission while he was in jail and upon hearing of their marriage, and after destroying Bob's farm he has been causing a path of destruction across America's farmlands. Just then, a swarm of locusts begins to head toward the town and Bruce allows himself to transform into the Hulk in order to defend it from the locust attack. As the Hulk attempts to fight them off, he is confronted by Carol's father, the Locust[1]. THe Locust sees the Hulk as a threat and attacks him with his ionic gun before using his devices to grow a giant insect army.
The Hulk fights off the insects, crushing them all one by one, but when a giant-preying mantis threatens Carol's life, the Mantis realizes what he's done and goes to his daughters aid, and gets knocked aside by his mad creation. When he witnesses Bob come to his daughters rescue, he realizes that he is truly worth of his daughters love. The Hulk, having crushed the remainder of the bugs destroys the preying mantis saving Bob and Carol from danger. The Hulk then turns around to resume his aggressions toward the Locust, however he is stopped by Carol who tries to explain that she still loves her father and that he needs help. Confused, the Hulk expresses frustration and wanders off to leave the Locus to his fate.
While back on Hulkbuster Base, Samson, Ross and Quartermain stand for the Abomination, who was found in the rubble of the damaged base. When the Abomination revives they tell him that they have planted a bomb in his head and that in order to live to have it deactivated he must hunt down and capture the Hulk. The Abomination agrees to help them, but warns the trio that he owes them one, and that the Abomination always repays his debts.