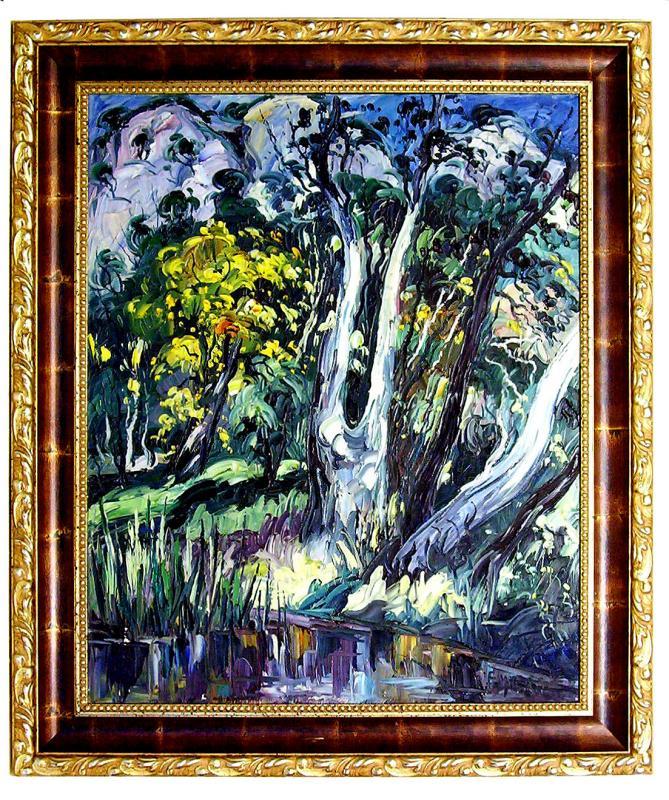 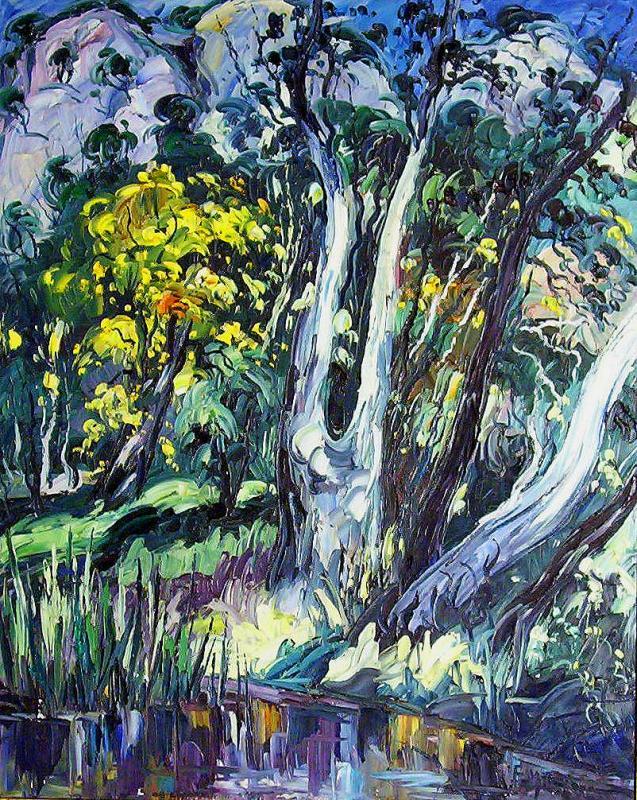 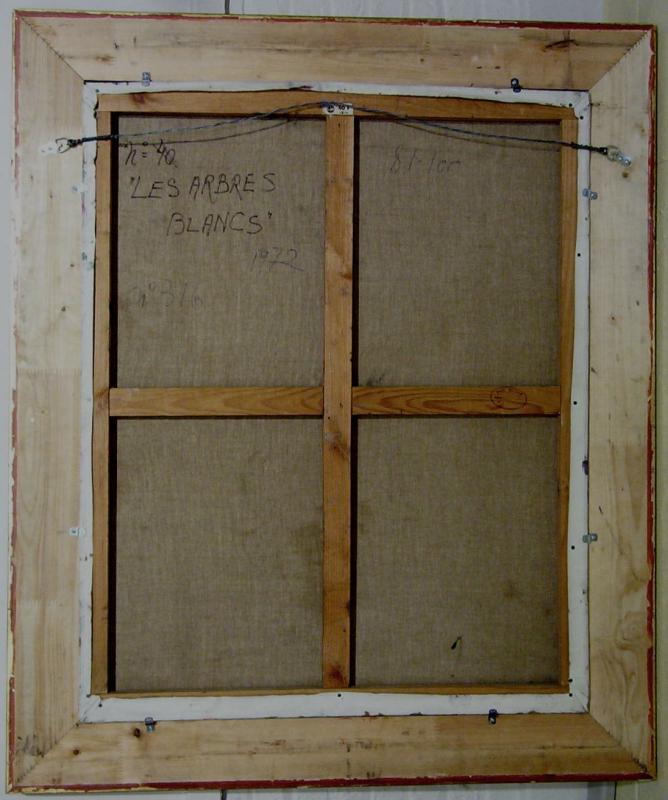 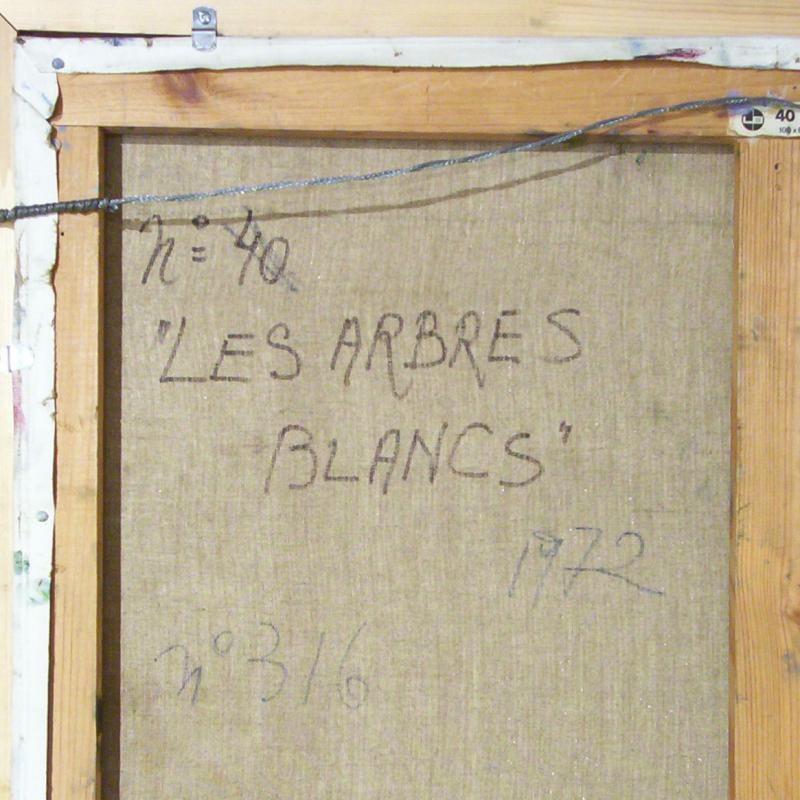 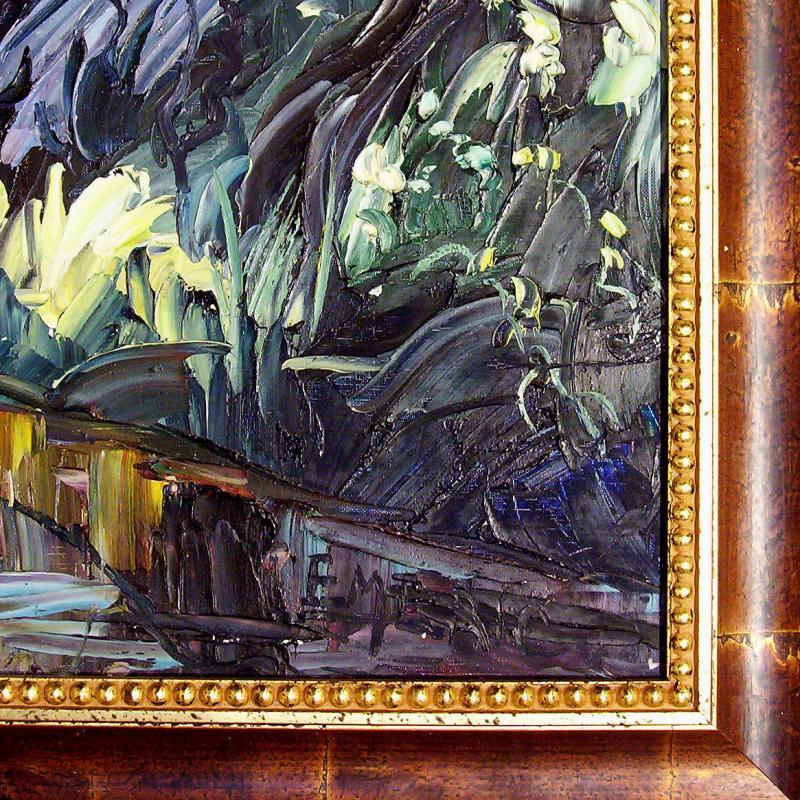 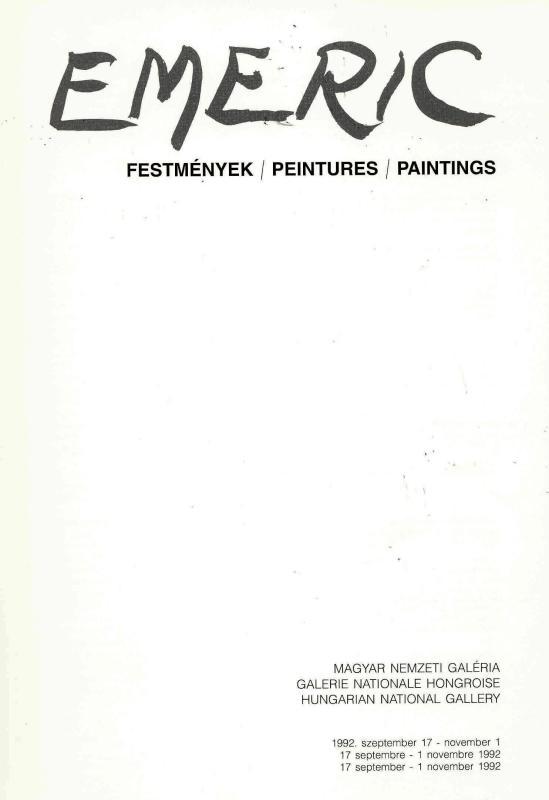 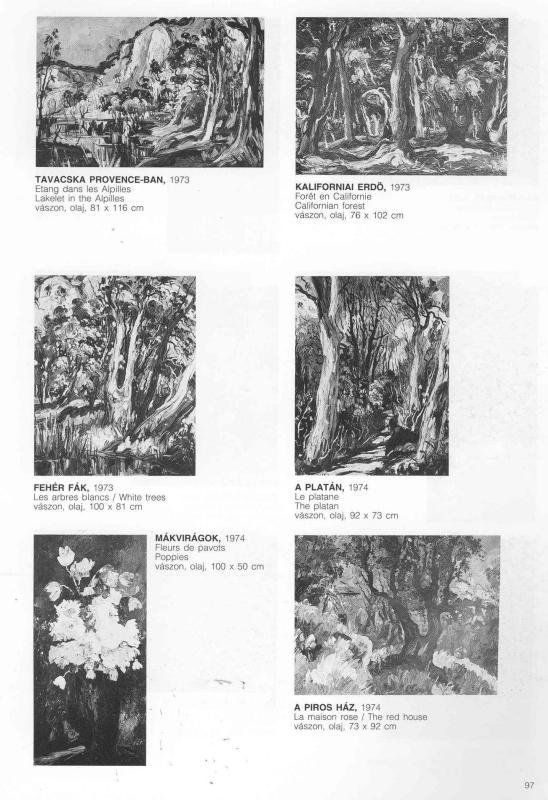 This lovely floral still life oil painting by the noted Hungarian contemporary artist, Emeric (1919-2012) is entitled "Les Arbes Blancs" (The White Trees). Signed by the artist and titled and dated (1972) on the rear of the canvas. Canvas measures 23.5" by 31" and frame measures 25.4" by 33.5" and weighs 4 lbs. Depicted is a beautiful scene of trees, thick foliage and blooming flowers at the edge of a pond. This work was purchased directly from the artist and imported to the U.S. around 2000. It is one of as handful of fine works by Emeric that we have for sale.  This particular painting was included in the Emeric retrospective exhibition held in 1992 by the Magyar Nemzeti Galeria, Galerie Nationale Hongroise (National Gallery of Hungary) in Budapest. It is shown on page 97 of the 104-page catalog from the exhibition, shown below.

Eméric Vagh-Weinmann, known simply as Eméric, was born in Hungary in 1919 into a family of painters, but made France his home at an early age. From the outset he chose subjects familiar to him such as landscapes and bunches of flowers and executed a number of views of Provence using broad, vigorous, coloured strokes. His main preoccupation was not structure: he engaged in showing the transience of the landscape.  He lived in Paris in 1945 and regularly exhibited there from 1948 at the Salon des Artistes Français and the Salon Comparaisons. In 1959 he went to New York was inspired to execute several views of that city. He exhibited in the South of France, the USA (New York regularly) and Japan. Emeric settled in Provence in 1971 at La Colle-sur-Loup.

Emeric's praises are perhaps best sung by his contemporaries. The famous playwright Jean Cocteau called him"the realist of the soul". J.P. Crespelle described Emeric's rich landscapes and floral still lifes as "a breath of epic grandeur. We haven't seen anything like it since Kokoshka and Soutine." James M. Gavin, the American World War II hero and Ambassador to France, was a great admirer of the painter and helped Emeric introduce his paintings to several American cities from New York to Los Angeles. Jaqueline Kennedy in a 1962 letter to the artist stated: "It is plain to see why you are one of France's best liked contemporary painters. The President and I are very grateful to have this nice collection of your work..."