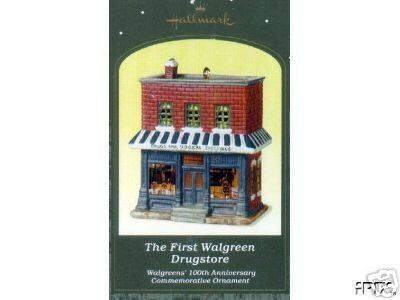 Hallmark Keepsake Ornament 2001. This is the very hard to find Walgreens First Drugstore. This Ornament and Box are in "MINT CONDITION". It is the Walgreen's 100th Anniversary Commerative Ornament. The front is a replica of the first Walgreen Drugstore that opened in Chicago's south side in 1901 and reads "DRUGS AND SURGICAL SUPPLIES" ... This piece was not available in Hallmark Stores. It was sold only in Walgreens in 2001. It matches the ~Nostalgic Houses Series~.

2000 Hallmark I Dream of Jeannie~Set of 2 Hallmark Ornaments