Goodell-Pratt Screwdriver Spiral Ratchet No. 811A 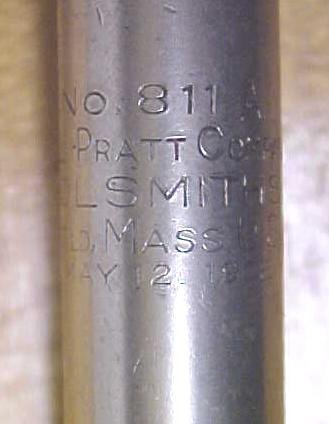 This is a very rare tool manufactured in the 1908-20's era in Greenfield Mass! This is the improved model from the original 1890 patented model, featuring ratchet movement in both directions in both the closed and opened spiral positions. Controlled by a selector switch on the larger main shaft. This slot bit screwdriver is 15.8" long fully extended, 10.7" long closed and locked in a stationary position, without the bit in the chuck. This one is in good useable condition, with one 5/16" wide slot bit included. Note the picture of the bit shank, it is different slightly from the YANKEE brand shank, with two end flats and a circular knotch for holding it in the spring chuck. Works great, and is the same shank diameter as the YANKEE brand No. 30A size. The middle shaft is marked "NO. 811A GOODELL-PRATT CO. TOOLSMITHS GREENFIELD MASS. U.S.A. PAT. MAY.12.1908". Goodell Bros., the original patent holder, became Goodell-Pratt Co. in 1899. Goodell-Pratt continued to engineer and manufacture new-improved models of the spiral screwdriver in the 1900's era. This is a one of the unique designs with a very good solid hardwood handle, that has some minor wear, some tiny dings on the butt end mostly and some of the rosewood type stain worn off, but still looks nice and is very well secured. The ratchet and spiral features are in nice shape, very little wear, smooth operation. The bit is removable, held in place very tightly with a very good spring type chuck, very similar to the YANKEE brand No. 30A in design of the spring release and automatic hold of the tip when release with the tip in the chuck. Overall a very nice clean tool! One of the few we have seen of this model No. 811A, and even more so, in this nice of condition! Rare! We generally have several different models of this type spiral screwdriver in stock and listed for sale on this website, so you can compare the different designs and features!