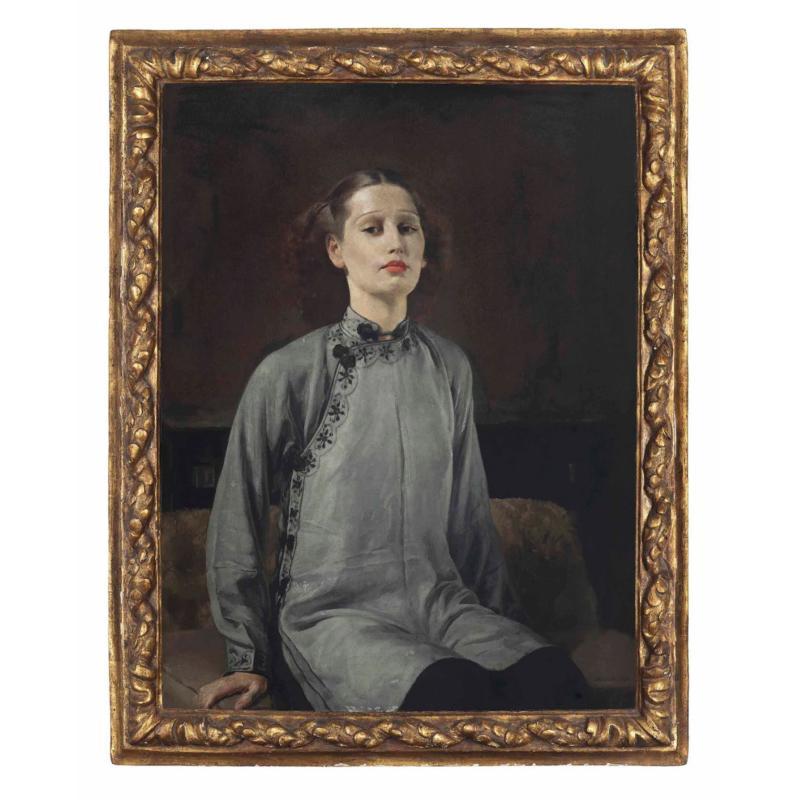 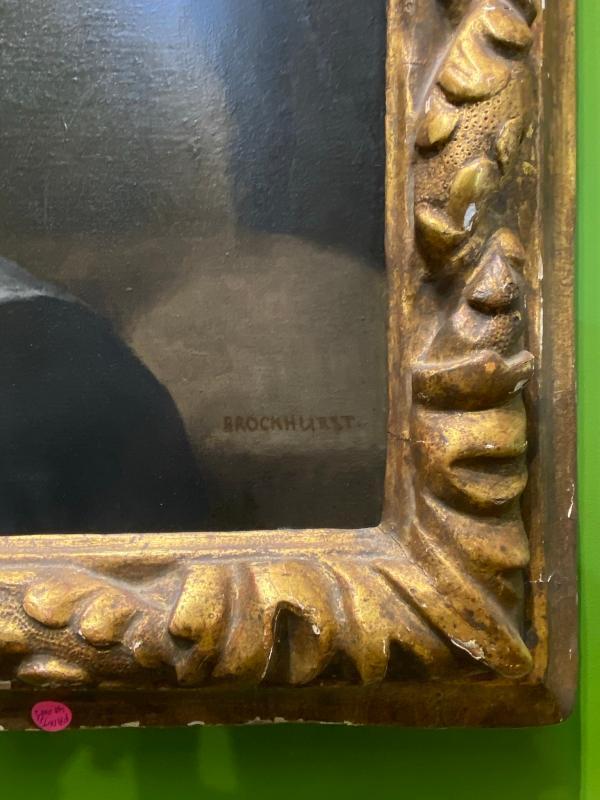 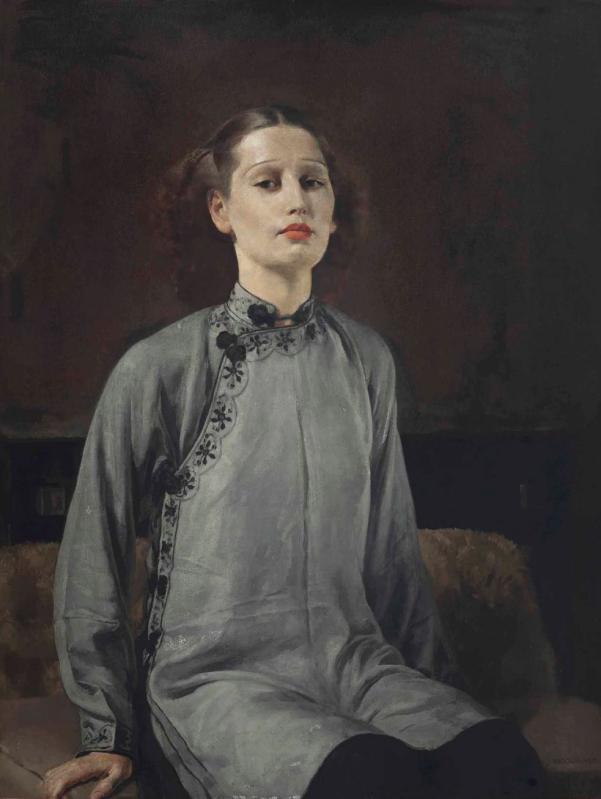 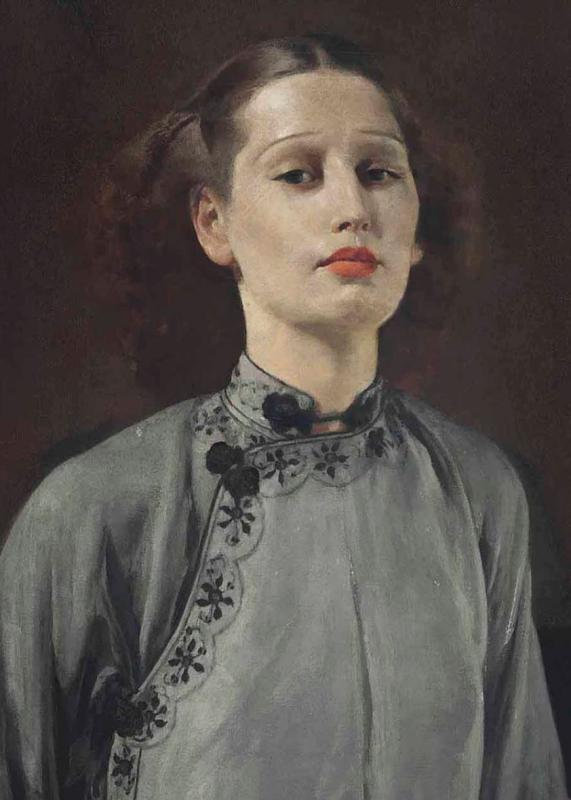 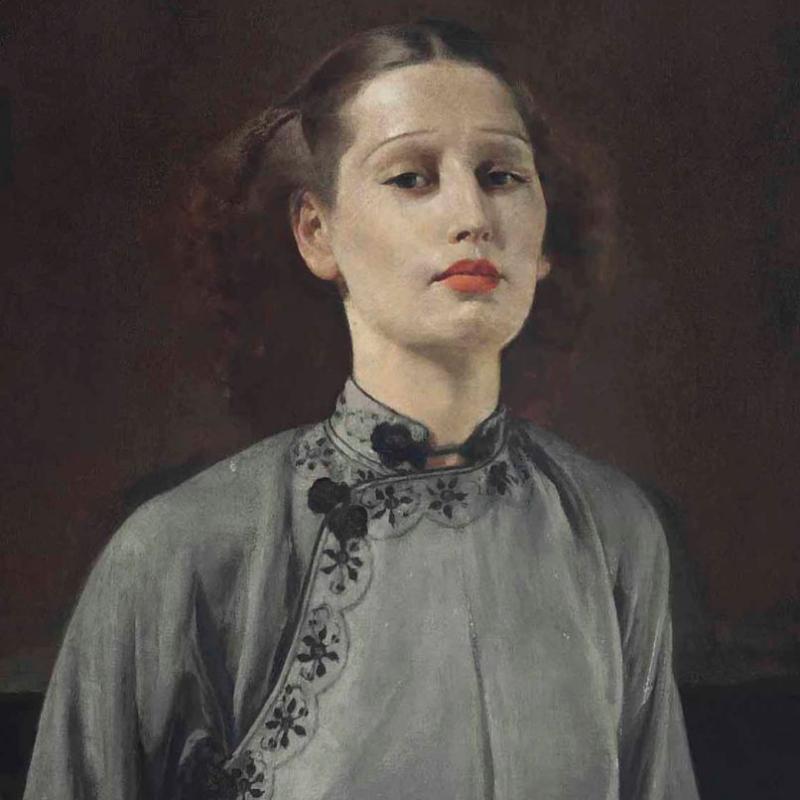 Our oil on canvas portrait of the artist's wife, Dorette, by Gerald Leslie Brockhurst, R.A. (1890-1978) is entitled "Zeitgeist".  It is signed in lower right and on verso further signed, numbered and inscribed "ZEITGEIST by Gerald L Brockhurst ARA 4 ... Studio ...  no. 4" on a label attached to the stretcher.  44 x 35 in, 111.8 x 88.9 cm.  Canvas with old restorations and numerous chip losses, wear and surface dirt to the giltwood and gesso frame.

The painting depicts Kathleen Woodward who he met at the Royal Academy Schools in 1928 where she was working as a model at the age of 16.  He renamed her Dorette and she served as his constant muse and model over many years.  He exhibited paintings of her each year at the Royal Academy from 1933 to 1939, and in 1947 she became his second wife.

In this work, unique for its Asian style, Dorette is wearing a Japanese kimono-style blouse with her hair drawn back with an Eastern chest in the background.  In Christie's lot essay it was said "Brockhurst had a volatile temperament, and tensions within his passionate relationship with Dorette on occasion came to a head with tempestuous arguments. It was as a result of one of these, that Brockhurst attacked the canvas with a knife, and the slashes bear visible testament to the ferocity of the action. Whatever caused such an attack must have been resolved, for the couple stayed together until the artist’s death in 1978."  Evidence of the artist's slashes aren't readily apparent, and clearly these damages were restored at some point.

This painting was exhibited at the Royal Academy Summer Exhibition in 1935 where it sold for £1,500, the highest price paid for a painting that year, presumably to W.S. Robinson Esq. who loaned the picture to the Walker Art Gallery in Liverpool in 1936.  The painting was apparently sold to Portraits Inc. and later reacquired by the Brockhursts.  In the 1980s, about a decade following Gerald's passing, Dorette sold the work to her dear friends, Colonel Benton and Billy Elliott.  The painting was acquired by our client at Christie's in London in 2015.

For more details on this lovely work, we are happy to forward a copy of the entire Christie's lot essay.