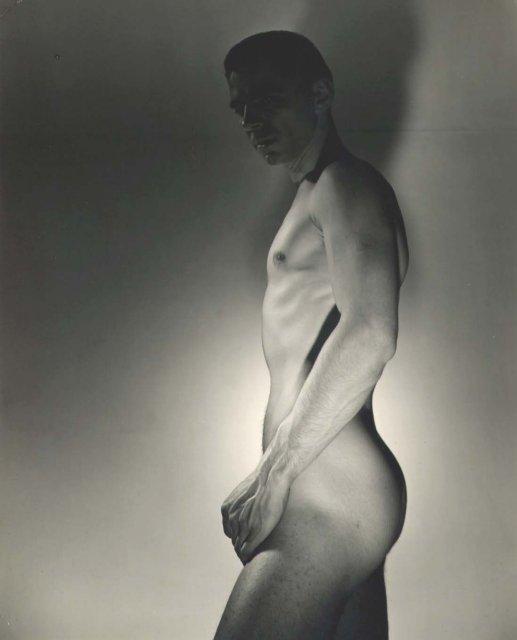 Printed on heavy weight paper. Stamped verso with the photographer's 229 East 47 St./ New York address and a stamp indicating the collection of John Edward Rollins. Ted Starkowski was Lynes' boyfriend and a favorite model in the early 1950s. George Platt Lynes (1907-1955) was a very successful fashion and ballet photographer in New York in the 1930s-40s, and later a much sought after portraitist. But he is best remembered for his images of the male nude. A true pioneer at a time when erotic photography of the male was taboo, his work influenced all the important photographers of the male nude that followed. Since Lynes destroyed many of his negatives, most of the prints that remain were gifts to friends.

Condition: Very good; there are two black printing spots evident on the image and minor chipping at the corners; minor surface pitting and a slight crease at the left edge, both visible only in raking light. (Note: price adjustment has been made to accommodate this condition.)

OTHER WORKS BY LYNES ARE AVAILABLE; PLEASE EMAIL US.