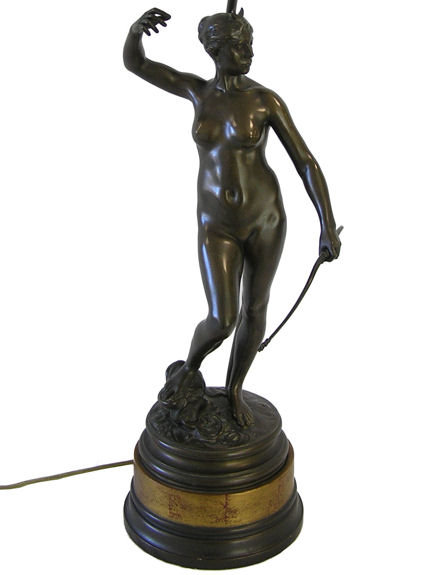 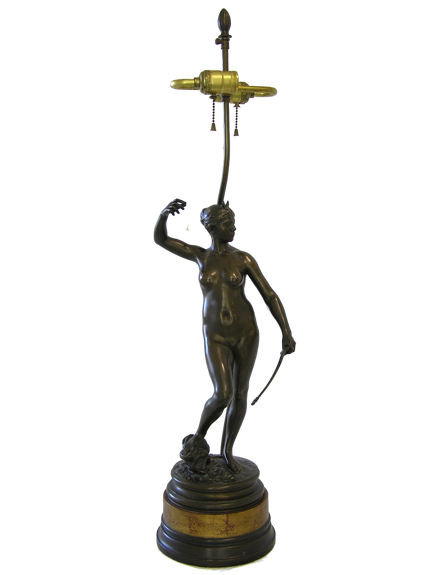 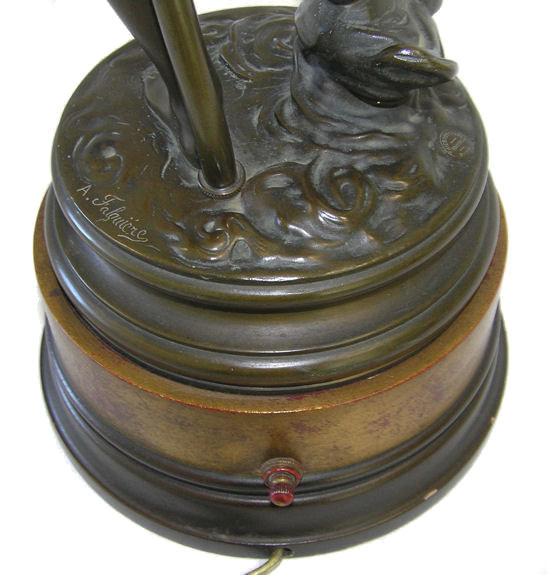 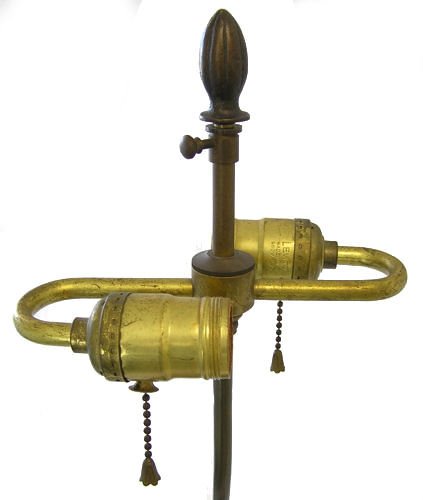 This antique cast bronze figurine of the hunter Diana by Jean-Alexandre-Joseph Falguiere (1831-1900) was cast by Thiebaut Freres of Paris and has been drilled for use as lamp. Signed " A Falguière " and with the foundry mark " THIEBAUT FRERES FONDEURS PARIS ". Measures 32.5" high, 9" wide and 8" deep and weighs an estimated 15-20 lbs. Bronze figurine alone measures approximately 18" high. Lamp is in fine working order and all hardware and wiring is in good condition. Gilt wooden pedestal and wiring appear to be roughly 20-35 years old.

According to Sotheby's, the original life-size plaster model of Diana was exhibited at the 1882 Paris Salon and was later carved in marble and exhibited at the 1887 Salon. These original works are now in the Musee des Beaux-Arts in Toulouse France. This work was also cast by Thiebaut in a 30" tall size, and on 4/2/02 Sotheby's London sold such a casting in lot 189 for 3,346 BP. Other castings of works by Falguiere have regularly appeared at major auction with sales ranging from $6,000 to $20,000. This item resides in Norwalk CT 06854 and may be seen by appointment.

Falguière was a student of Jouffroy at the Paris École des Beaux-Arts and made his début at the Paris Salon in 1857. He won the Prix de Rome in 1859, and in 1864, while still in Rome, he sent his Winner of the Cockfight to the Salon, winning his first award there.  Three years later his statue of Tarcisius the Martyr  also won a medal. He achieved a first prize medal at the Paris Exposition Universelle in 1867 followed in 1868 by the medal of honour at the Salon for a marble replica of his Tarcisius.  A lecturer at the Paris École des Beaux-Arts, he was made a Chevalier of the Légion d'Honneur in 1870, subsequently being promoted to officer in 1878.  Today he is considered one of the key contributors to the Realism movement in sculpture in the French School of the 19th century.

Falguière began his artistic career by studying Classical art and the effect of this training can be seen in his early works, most notably in his Theseus as a Child from the 1857 Salon, and in the group that gained him the Prix de Rome, Wounded Mezentius Saved by his Son Lausus. During the next few years, Falguière confirmed his inclination towards Realist art with sufficient vigour for some critics to accuse him of a lack of refinement. His best works from this stage in his career are Egyptian Dancer (1872); Statue of Pierre Corneille; Cardinal Lavigerie; Woman with Peacock; Statue of La Rochejaquelin; and a statue of Eve, together with many monuments.  In 1878 he was commissioned to execute the Triumph of the Republic (installed in 1881 at the top of the Arc de Triomphe de l'Étoile, only to be removed in 1886), the Courbet Monument and the Statue of La Fayette.

His works can be found in numerous museums across France and elsewhere, including those in Amiens, Angers, Antwerp, Berlin, Bucharest, Grenoble and Toulouse, plus the Louvre, Maison de Victor Hugo, Musee d'Orsay and Musee de la Comedie-Francaise in Paris, among others.