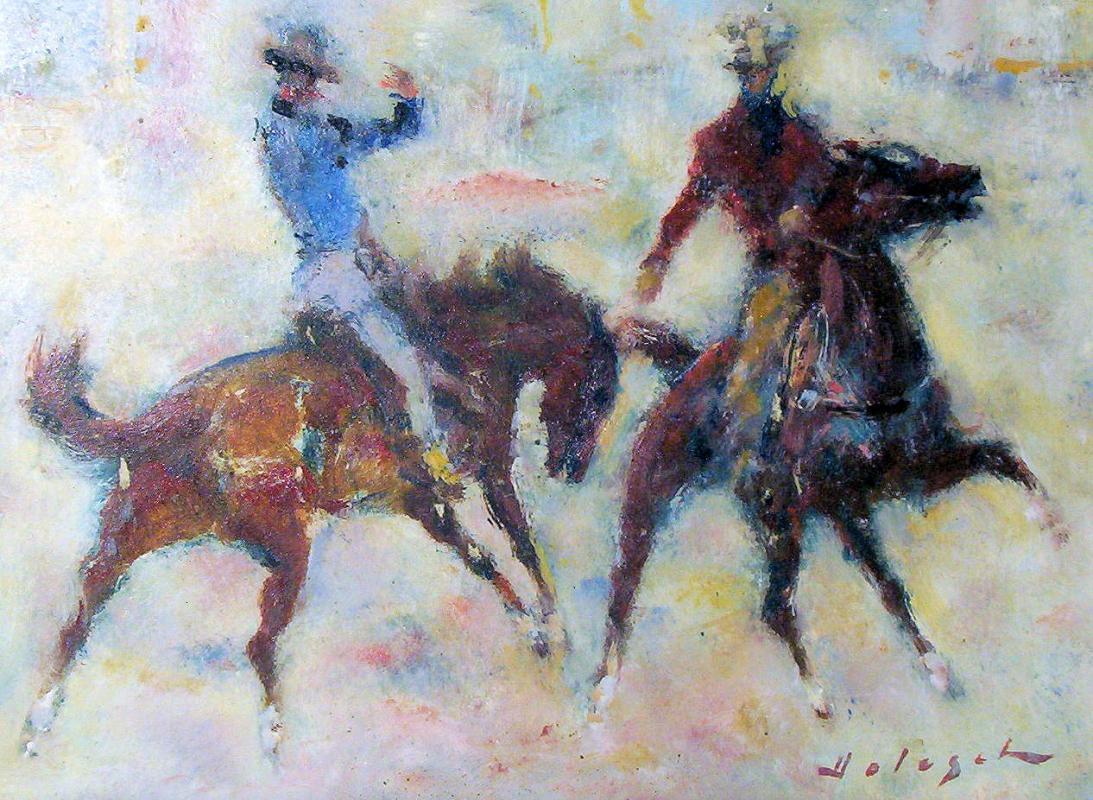 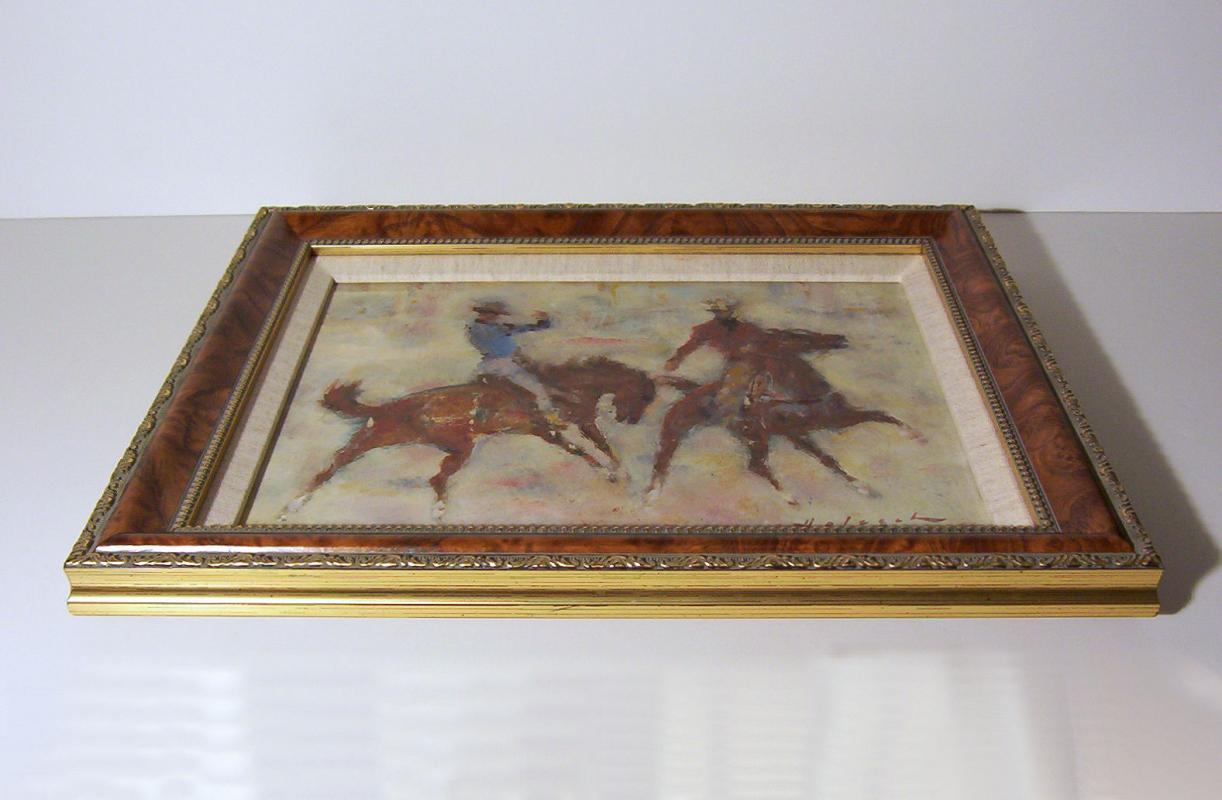 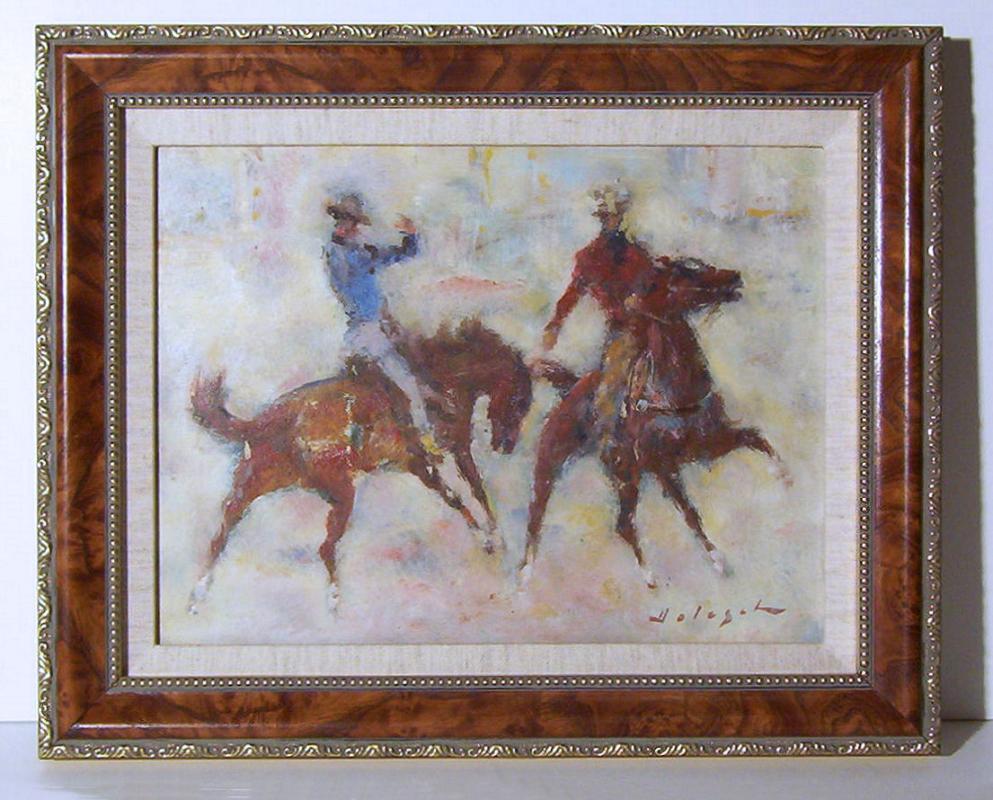 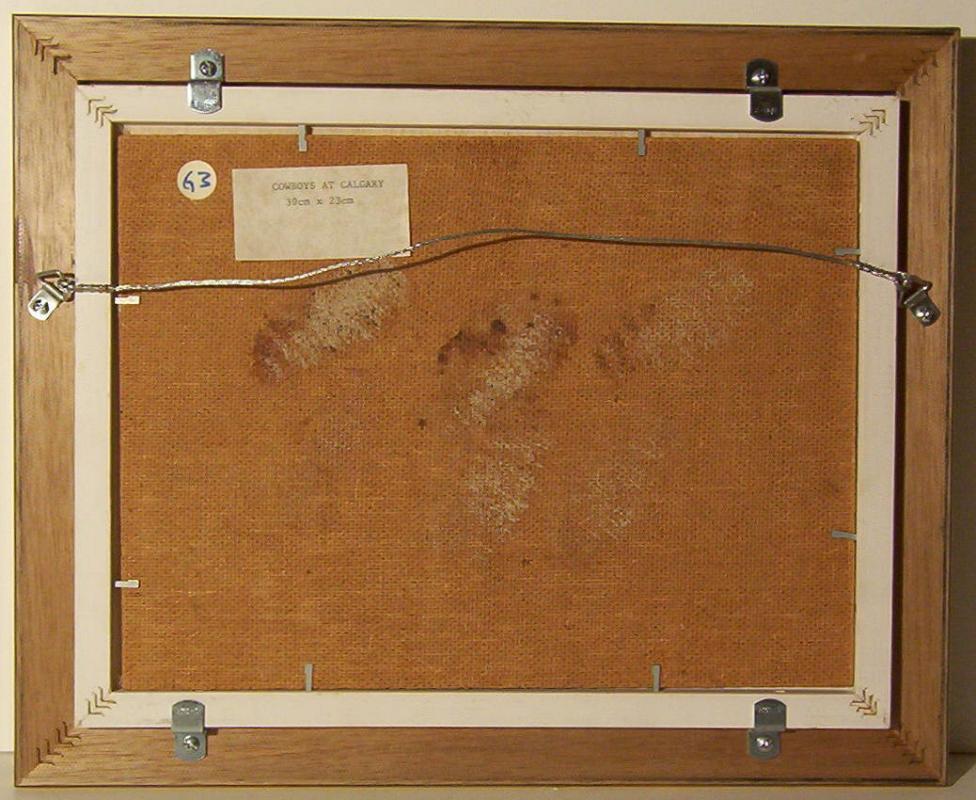 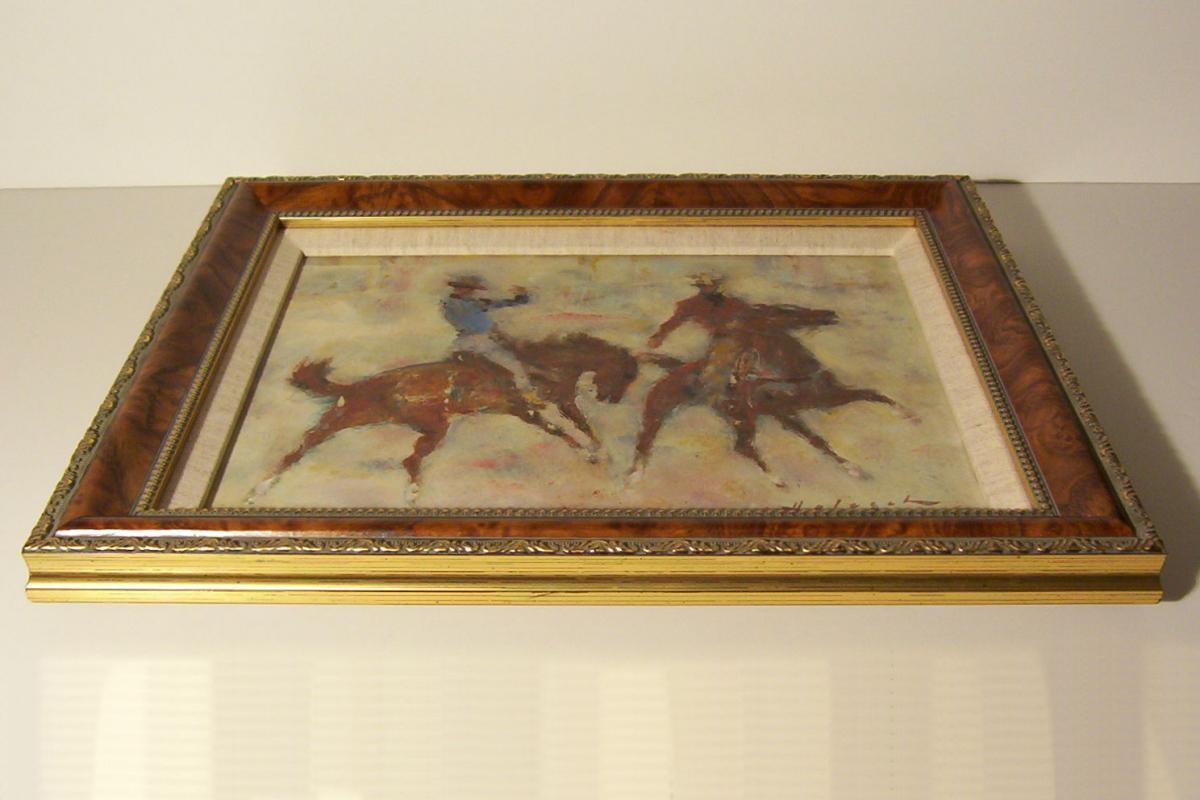 This is an oil on artist board by the important Hungarian-born and internationally recognized painter of horses, Denes de Holesch (1910-1983). Signed by the artist. Board measures 9" by 12" and contemporary frame measures 12 5/8" by 15 1/2" and weighs 2 lbs. Rear carries an old printed label with the title of the work: "Cowboys at Calgary". This work is being sold on behalf of a Hungarian collector with a large assortment of 19th and 20th century Hungarian and European paintings. It is one of a handful of works by Holesch that were purchased directly from the artist's wife, Joyce.

Denes de Holesh was a truly international artist whose favorite subject was horses. His works have been exhibited all over the world, including in New York, Beverly Hills, Boston, Chicago, Paris, Mexico City, Montreal, Tokyo, Sydney, and Madrid. His horse paintings fall into one of seven themes, including polo, circus, rodeo, hunt, bull-fight, race-course and running free. His mastery of the subject has been compared to that of Picasso, Delacroix and Franc Marc. In his book entitled Holesch (1910-1983) Horse Paintings (published in 1989 by Austrascope), the noted Australian writer and art historian, Andrew Mackenzie, stated "Although he painted countless horses, each canvas is a unique and individual study, apturing the personality of an animal of universal appeal, an heir to a tradition as old as mankind." In light of the recent passing of Prince Rainier, it is interesting to note that it has been reported that David Niven purchased a Holesch horse painting as a wedding gift for the Prince and Grace Kelly. Denes de Holesch was born in Banska-Bystrica in northern Hungary in 1910. He studied at the Hungarian Academy of Fine Arts in Budapest on a scholarship. Early in his career he traveled to China, Japan, Philippines, Java, Bali and Australia, where his reputation grew rapidly. In 1939 he established a studio at Lavender Bay near Sydney. In 1940 he exhibited at the Macquarie Galleries in Sydney. In 1944 he married Joyce Greer, the Melbourne concert pianist. In 1945 the couple moved to New York where his interest in horses grew. He held exhibitions at Gallery Wildenstein, Herve, and FAR Gallery. In 1946 Holesch moved to Montreal where he exhibited at the National Gallery of Montreal. In 1947 he moved to Boston where he continued painting portraits and horses. He exhibited there at the Ehrmann and Vose galleries. Later in the year he moved to San Francisco where he was invited to participate in the "Renoir to Picasso" Exhibition held at the Maxwell Gallery.

In 1953 his works were included in a Group Impressionists Exhibition held at Ohana Gallery, London. In 1954 he travelled to New York where he was commissioned to paint Herbert Gasser, Nobel Prize Winner in Biochemistry. In 1955 he returned to England and then travelled to Paris to exhibit his works in the Galerie Marcel Lenoir. In 1956 he again returned to New York to work on portrait commissions and exhibitions of his works, mainly of horses, which were held in New York, Boston, San Francisco, Chicago, as well as an exhibition at the Veerhoff Gallery in Washington, D. C.

In 1960 he moved to Antibes France. His works were now permanently exhibited at Galerie Madsen on Rue St. Honore in Paris, and the Galerie Davis at Place Vendome, Paris. In 1961 Holesch was invited to attend a special bullfight held in the South of France on behalf of Pablo Picasso for his 80th birthday. Thereafter scenes of bullfights soon appeared in Holesch's paintings. In 1963 he moved to London and soon after moved to New York for portrait commissions. He then travelled to Mexico City where his works were exhibited at the Galerie Arte de Coleccionistas. In 1963 he moved to Vienna and later to Wurttemberg where he remained three years. In 1967 he moved to a farmhouse in the village of Voulangis near Paris. In 1967 he visited Beverly Hills California where his works were exhibited by the Art Collectors Gallery.

In 1974 he painted the portrait of 'Octavio', the favorite Arab horse of Delia, Princess Zu Oettingen of Wallerstein. Her husband, the Prince, being President of the Baden-Baden Jockey Club. In 1975 he moved from to Castelfontana in the Dorf Tirol overlooking Merano, Italy. He exhibited his works in a group exhibition in Merano in which works by Salvador Dali and Annigoni were also displayed. In 1976 his works were chosen for a group exhibition held in the Museo de los Castillos, Manzanaves el Real, Madrid, Spain. In 1978 he travelled to Ottawa, Canada where he stayed for three to four months, painting portraits on commission. In 1979 he returned to his old farmhouse at Voulangis for a few months and then travelled to Westmount, Montreal, where he lived for just over a year.

In 1981 he moved from Westmount to Oxford, England where he resided for a few months before moving to Stoneythorpe Hall in Warwickshire. In 1983 after a short stay in Paris he travelled to Hungary and only four weeks after his arrival he died of cancer on the 11th May. In 1985 his works were selected for a group exhibition in Cascais, Lisbon. In 1989 an exhibition of his horse paintings was held at the Hotel Atrium Hyatt in Budapest. Also in 1989 a catalog and biography of Holesch entitled Holesch Horse Paintings 1910-1983 was published by Andrew Mackenzie, an accomplished Australian writer. His famous painting "Courtship" can be seen in the film "One other day in Paradise" starring Melanie Griffith, which was released in 1989. In 2000 an exhibition of his works entitled "We Love Horses Don't We?" was held in Budapest.