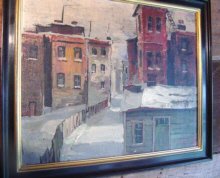 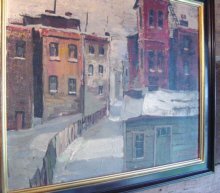 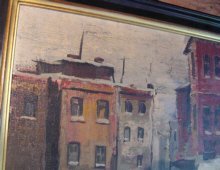 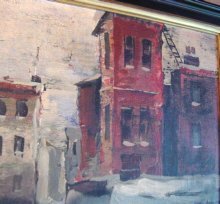 Born in Latvia in 1909, Wally Brants studied art in the capital city of Riga at the Roman Suta Studios, exhibiting there until the outbreak of World War II. Toward the end of the war, he was transferred to Germany, leaving there for Australia. In 1955, Brants and his wife relocated to St John's, Newfoundland, where he continued his painting and was a set designer for CBC-TV and other entertainment media, and was involved in the Art Association of Newfoundland and Labrador, where "City In Snow" was exhibited, as a label on the back attests. Signed "W Brants '69" in the lower right-hand corner, it measures 16 inches by 20 inches, exclusive of the frame, and has been conservation mounted Noted mainly for his landscapes, Brants's works are exhibited in many private collections, as well as in the collections of the Government of Newfoundland and Labrador, the Memorial University of Newfoundland, the Canadian Broadcasting Company, the Royal Trust and Central Trust. He won several government awards and was honored in many exhibitions, notably a 25-year retrospective in 1981 and a showing of his renderings of Newfoundland churches at the Art Gallery of Newfoundland and Labrador in 1996. Wally Brants died in 1998 at the age of 89. This fine example of Brants's work, in oil on canvas, is signed and dated 1969. It is superb condition and measures 16 by 20 inches. It has been recently reframed.