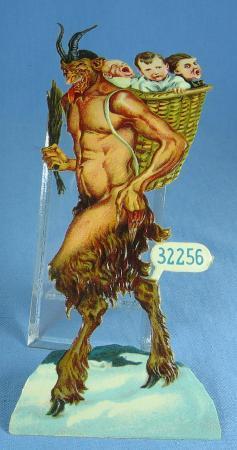 Totally bizarre Victorian Die-cut scrap of a Black Peter stealing away with a basket of screaming babies. Measures 7 1/4" high x 3" .. Information as found on the web regarding the fork lore of Black Peter ... During the Middle Ages, the Dutch referred to the Devil as Black Peter. Gradually, the antithesis of Christmas found his way into Christmas folklore in Holland. A legend existed that St. Nicholas put the Devil in chains and made him his slave. Each St. Nicholas Day it was believed that the Devil himself was working under orders from Saint Nick. The good Saint would direct Black Peter to drop gifts and candy down the chimneys into the children shoes which were always there on St. Nicholas Eve. Eventually, the practice was carried over to Christmas which was actually a few weeks later. Gradually, the legend gave Black Peter a role in St. Nicholas  decision making as to what the Dutch children should receive for Christmas. The naughty ones and the lazy ones would be spirited away during the night by Black Peter, or punished with a birch rod. St. Nicholas would always force this evil slave to reward the good children with gifts. The fate of the naughty children was often spared by St. Nicholas at the last moment in some cultures, subject to a promise to be good during the following year. Depending on which legend one followed during these times the names for Black Peter varied from Hans Trapp to Knecht Ruppert to Krampus. Condition as shown in the photos.

We accept VISA, MASTERCARD, DISCOVER, and AMERICAN EXPRESS payment via PayPal, or you can pay with a money order or check. We ship the same day payment is received if paid with a money order. If you make payment with a check, shipping will be delayed.