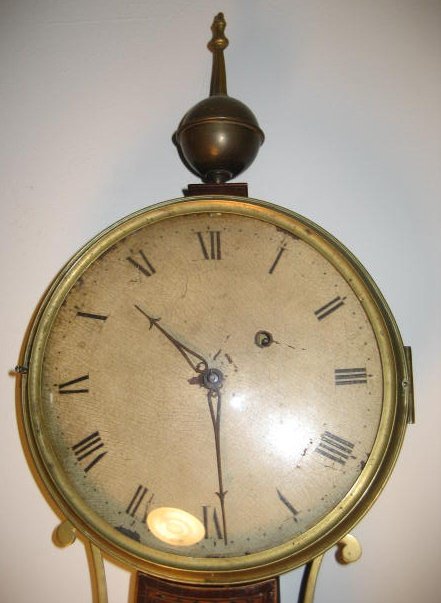 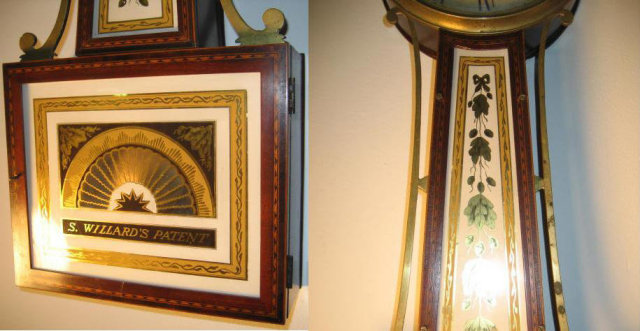 Extremely rare original early Simon Willard banjo clock in the only known case made by John Seymour of Boston. This clock has all the identifying characteristics of an early Simon banjo. The movement is T-bridge, early experimental knife's edge suspension, fillister head mounts, step-train, early singular cast side arms with pinning through the center, definite original Simon hands, remnants of the gold at the outer edge of the dial, blind mitre dove-tailing in the waist box [see photo], dovetailed bottom board in base box and a truly rare characteristic, dove-tailing also at the top of the base box, early wood blocks covering hinges for support in base [an early Simon characteristic], a definite Simon beat regulator, a definite Simon chimney, definite Simon lower box latch (shafted through the door with the same sized shaft as the winding arbor), its original duck-billed weight. Even the crank is original. As in some early original known Simon banjos there is a brass grommet at the winding hole that is original to the dial. Simon used this on some of his first banjos obviously to alleviate wear from the winding crank to the dial. The case with its half moon inlay throughout is a definite characteristic used by John Seymour in his cabinetry work. This is the only banjo clock that I've ever seen that has all of Simon's characteristics in mechanics along in a Seymour case. The only hurt to this extremely rare clock are the glasses. The only original glass to the clock is the upper glass. Normally, a definite Simon Willard with replaced or restored glasses is worth a small fraction of what one is worth with original glasses. Being in a case of this nature [Seymour] and having all the characteristics of a very early Simon [experimental] we feel that the value should be MUCH higher than a Simon with just replaced glasses only. The combination of experimental Simon along with a Seymour case certainly warrants our asking price. Dimensions: 34" in height to the tip of the early period finial. We can furnish photographs of the movement and anything else necessary. This site only allows us to use four photos at a time. If you are serious, please don't hesitate, and we will e-mail you more detailed photos. The blind mitre can clearly be seen in one of the photos. To all aficionados of Simon banjos, seeing a blind mitre is as important in identification as anything else. Most Simon Willard banjos don't have this characteristic but if it's there it is a definite Simon if the other characteristics are also present.