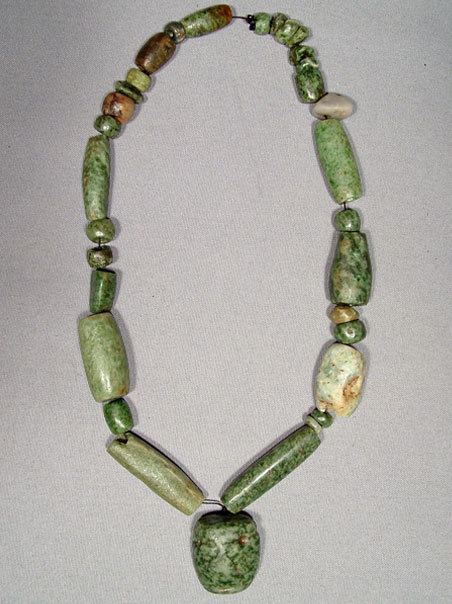 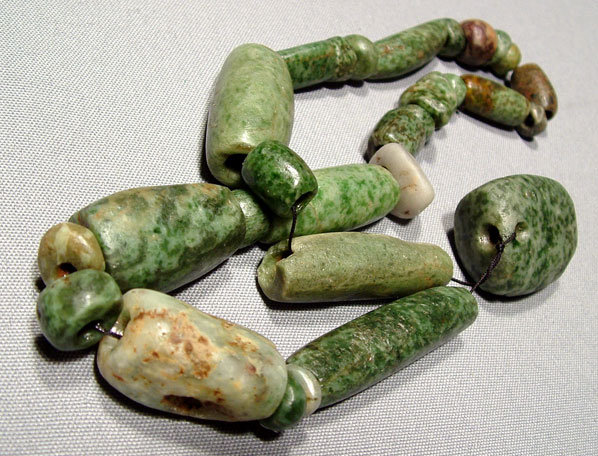 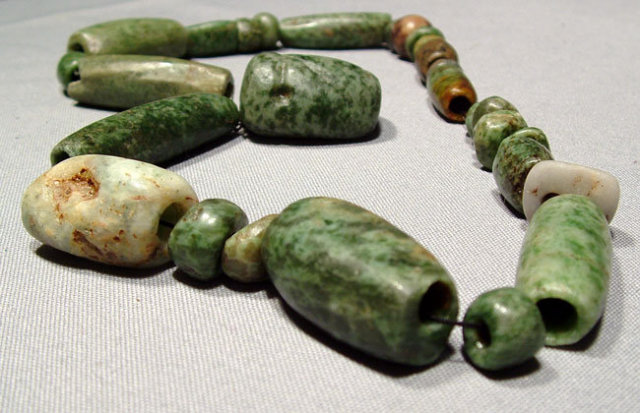 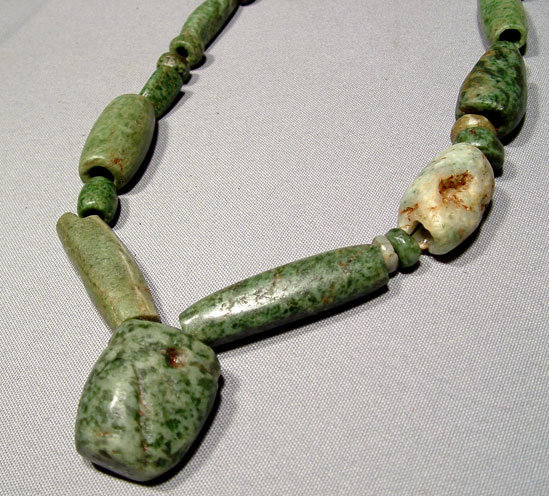 An authentic antique pre columbian Mayan green stone necklace, late classic period (500-950 AD), composed of 31 stone beads of tubular, round, flat, and barrel-shaped forms, with a carved mask at the centre as the pendent.
MEASUREMENTS: Length: In a straight single line: 21 inches (53 &frac12; cm), in twofold: 11 inches (28 cm).
CONDITION: This is a museum quality ancient object in perfect condition.
REFERENCES: In references these types of stones are described as Central American Jade.
"Jade from the Cenote of Sacrifice Chichen Itza, Yucatan" By Tatiana Proskouriakoff, Peabody Museum of Archaeology and Ethnology. Harvard University Cambridge, Massachusetts, 1974.
Also in "Maya" published by RIZZOLI, New York, page 554.
In the pre-Hispanic epoch necklaces made of green stone beads are one of the elements most commonly used by the Maya to reinforce the high rank of an individual wearing them. Beads of this material were among the few articles and objects that achieved status of "money". All our artefacts are accompanied by a Certificate of Authenticity. The Mayan Culture is considered to be one of the largest cultures in the American continent because of their knowledge in the sciences, astronomy, and more. This civilization was born during the third millennium before Christ, living in a 320,000 square kilometre territory, taking in regions of Mexico, Guatemala, the Honduras, Belize and part of El Salvador. Through the centuries they were able to form a great civilization. This civilization had power for over 2000 years; from the VI century B.C. to the XV century they lived and formed three periods: Preclasico (1500 BC-292 AD), Clasico or Old (292 - 900 AD), Postclasico or New Empire (900-1527 AD).

ALL OUR ARTIFACTS ARE ACCOMPANIED BY A CERTIFICATION OF AUTHENTICITY