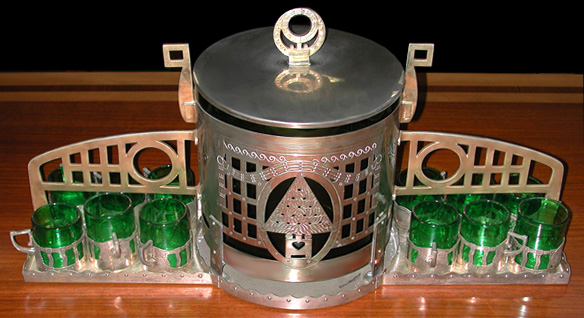 WMF(WURTTEMBERISCHE METALLWARENFABRIK) traces its origins back to Daniel Straub, born in Geislingen in 1815. Beginning his career in repairing railway construction equipment, he joined forces in 1853 with Friedrich & Louis Schweitzer in manufacturing metal goods.  These items were manufactured either out of Sheffield plate or copper patinated to look like bronze.  The company won a prize metal in the International Exhibition in London in 1862.    The Schweitzer withdrew from the firm, which became Straub and Son, and opened showrooms it major German cities and was very successful.     Wurttemburgische Metallwarenfabrik was formed when Straub and Son joined forces with A.Ritter & Co, and specialized in the electroplating process, but expanding into glassworks and other components for its products.  One of their major commissions was to produce copies of antique silver pieces for the German Emperor's collection.   In 1905 the company acquired Orvit AG, a firm known for its Art Nouveau pieces and pewter wares.  The ostrich was the Straub's family heraldic animal, and was therefore incorporated into the company's trademark.