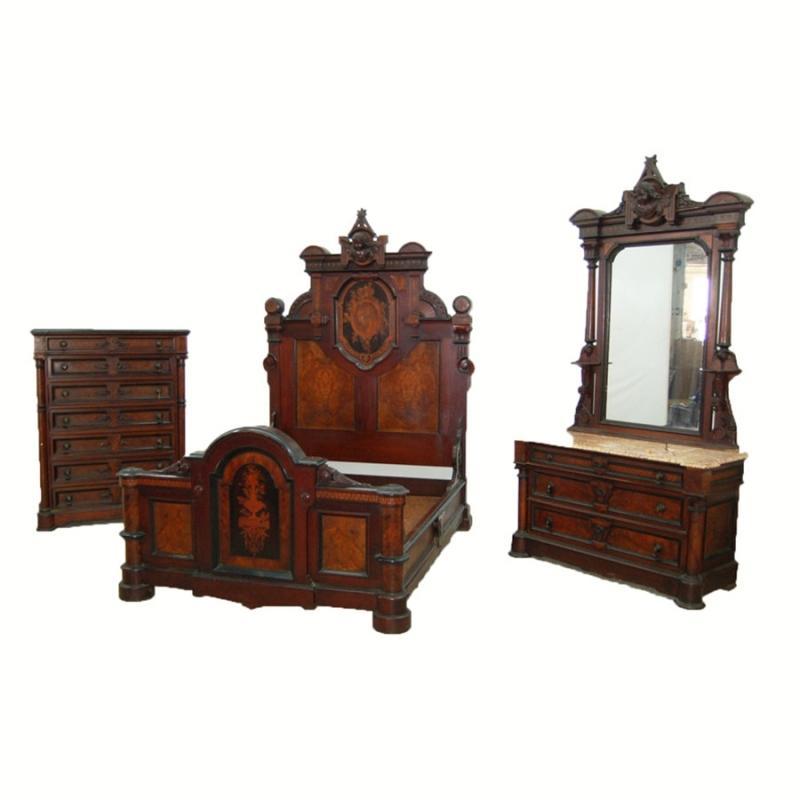 Fine Quality Renaissance Revival Inlaid and Carved 3- piece Walnut and Burl Bedroom Suite.  A very rare early Renaissance Revival example of the brief but important collaborative work by Gustave Herter and August Pottier during their partnership in New York, most likely executed in their building at 59 Beekman Street.

The Gustave Herter and August Pottier collaboration coincided with the inception of the Renaissance Revival style, for although Rococo Revival was at the height of its popularity during this time, the visionary German and French cabinet makers showed a predilection for the inset marquetry panels, gilded incising, and rich veneers, thus ushering in American Renaissance Revival style. This set would have been regarded as less than exuberant when compared to the pieces made before the American Civil War.

PROVENANCE: Antiquarian Traders purchased this set from a prominent Southern gentleman and his wife, who remarkably kept this treasured suite in her family for at least six generations.  Martha Wright Bird Riley, owned this set for the past nine years.  She inherited it from her father’s mother, Dorothy Elizabeth Spencer Bird, at her death in 2005.  Dorothy inherited it as a young woman, used it her entire married life, and loved it for nearly a century (she died at 95 years). It was in her bedroom while living with her parents in Durham, N.C. about 1920.

Richard Harvey Wright purchased the furniture set for his great grandmother in NYC around 1855 from the firm Herter, Pottier, and Co., a firm of two talented young men Gustave Herter and August Pottier, who briefly joined forces before becoming each other biggest competitors. He owned Wright’s Automatic and was the inventor of the first automatic cigarette vending machine.  He donated his estate “Bonnie Blue” to Duke University in Durham, N.C.

Martha's grandmother Dorothy met and married James Lewis Bird in 1933.  Among other talents they were both exceptional ballroom dancers.  Dorothy and James were successful merchants, and owned the “Bird’s Supply Store” located in Florence, S.C. for over forty years.  James Bird also had the distinction of being the first Mercury Outboard Motor dealer in South Carolina.

*This set is in original condition.