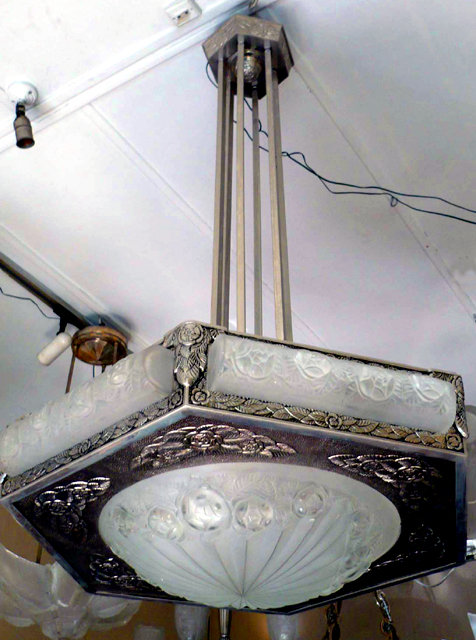 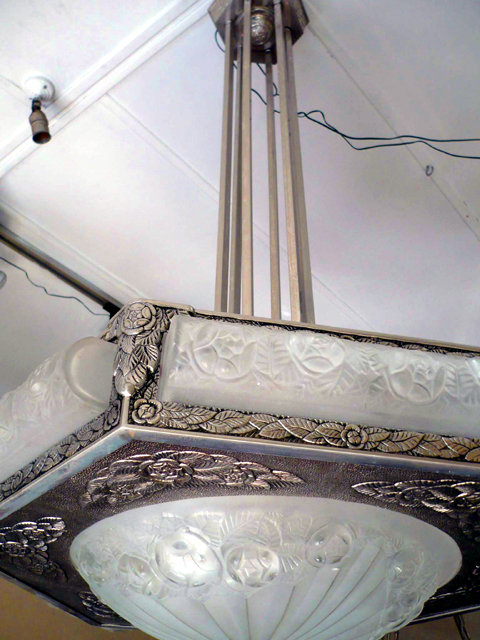 Spectacular art deco chandelier in chromed-metal with molded and frosted glass shade in raised rose and leaf pattern by Verrerie D'Art Degué circa 1925.

David Guéron, of Turkish origin and a former fighter of the French Foreign Legion, was the founder of the "Cristalleries De Compiégne". This glassworks mainly produced household glass in the early '20. David Guéron soon discovered that he wanted more with his capacities in the glass industry.

In 1926 he founded a new factory, which he called "Verrerie D'Art Degué" and put his full attention on the designing and production of Art Deco luxury art-glass. His factory was located on the "Boulevard Malesherbes" and his showroom was on the "41 rue de Paris". Guéron mainly produced vases, lamps and chandeliers. His glass got well known because of it's full and deep colors, which he achieved with a special process (especially red, orange, yellow and green).

When the Second World War started David Guéron shut down his glassworks. He fled France and was lat seen in Paris in 1949. His factory in Compiegne still stands and is now owned by a company selling tiles and doorframes. The old furnace downstairs still has glass melted to its walls.