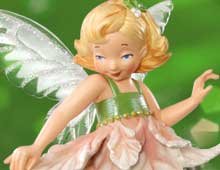 HALLMARK 2007 Christmas Tree ORNAMENT~~ Gold Crown Exclusive ~~ POINSETTIA FAIRY COLORWAY / REPAINT ~~ 3.75" H ~~ This is the Repainted or Colorway version of the first ornament in the very popular Fairy Messengers series which debuted in 2005. She is the exact same Fairy, but she has blond hair rather than the 2005 brown, & is wearing a pink leaf skirt rather than the red. Hallmark Stores got only VERY limited quantities & these SOLD OUT within hours at the Ornament Premiere in July 2007. Don't lose out.