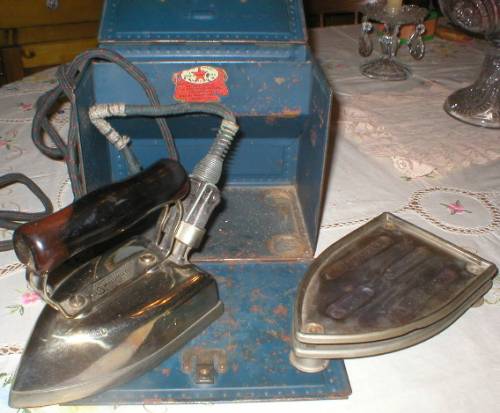 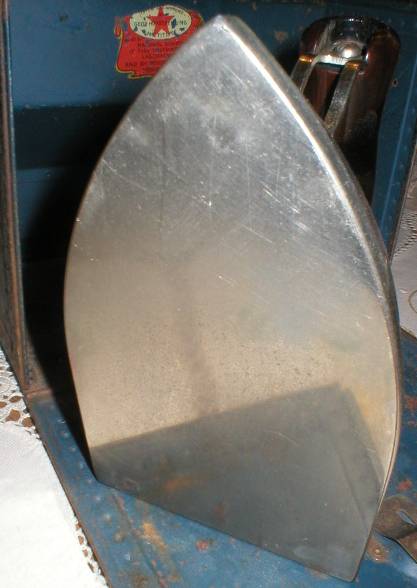 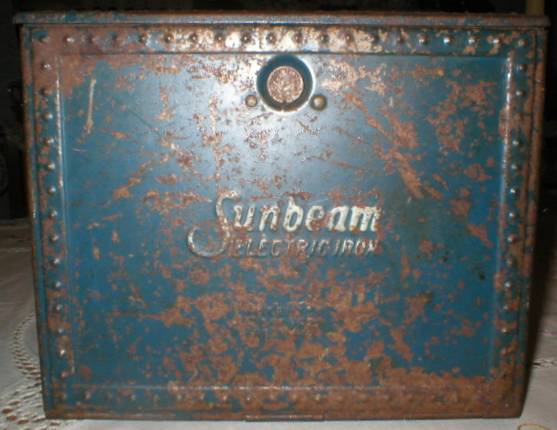 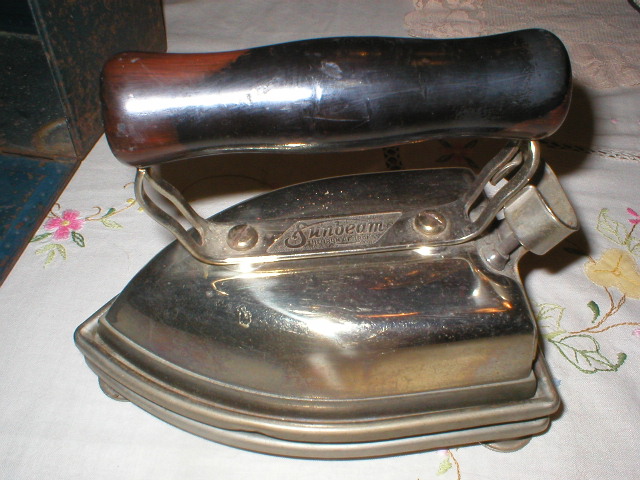 This is it! The first Sunbeam Electric Iron with the original Fire Proof Steel box and cloth covered cord!

The iron is still in nice shiney condition showing VERY little wear to the nickle plating, looks hardly ever used. The handle to the iron shows some wear to the black with the brown showing thru..or is it brown with black on it..or was it meant to be this way..not sure but either way..it's all shiney! Most likely patina from handling, but still, shiney and gives it some extra character. The wire shows wear to the cloth so I'm not going to even try to plug it in to see if it works, however, according to the Sunbeam ad from the 20's I found on this piece, it is guaranteed to work for a lifetime and also guaranteed it will never burn out..so it's technically still under warranty!

On the front of the metal part of the handle it is stamped "Pat.Apld For" and under the handle is the Sunbeam logo with "The Iron of Irons". On the back of the iron has a plate with all the info of the iron such as voltage. The iron itself weighs a ton! According to the ad I found, the weight is so women didn't have to press so hard when ironing. Today, no one would want an iron this heavy...actually..no one want's to iron!

The Fireproof steel box shows some wear and rust to the paint as to be expected from age, use and exposure, but is otherwise in excellent condition with no dings or dents. The front of the box has the Sunbeam logo with "Electric Iron" under this and "Patented 1566892 RE 16442". The box measures a little over 6.5" tall, 8" wide and 5.5" deep. The handle is still intact and nice and tight and there is a button on the front of the box that you would push in and lift the lid and the front drops down for easy access to the iron. According to the old ad I found for this iron and box, the box was actually sold separately.

The iron also includes the iron shaped hotplate for sitting your iron on so you don't burn the surface you are ironing on and it fits into the box by the indentations provided in the bottom of the box for it's feet. There is also a compartment for the cord which the original cord is still in place. This is just such an awesome piece of laundry history and a must have for your collection!

According to the history of Sunbeam, in 1921 is when the Sunbeam Brand name was first seen on an iron which is their first appliance, prior to the brand name Sunbeam, the company was called Chicago Flexible Shaft Company, a manufacturer of sheep shearing equipment, which is who created the Princess Iron, the first original Sunbeam iron under the CFSC name, in 1921 the company became sunbeam and the iron's name changed to "The Iron of Irons" which is this iron. The first actual Sunbeam Iron.